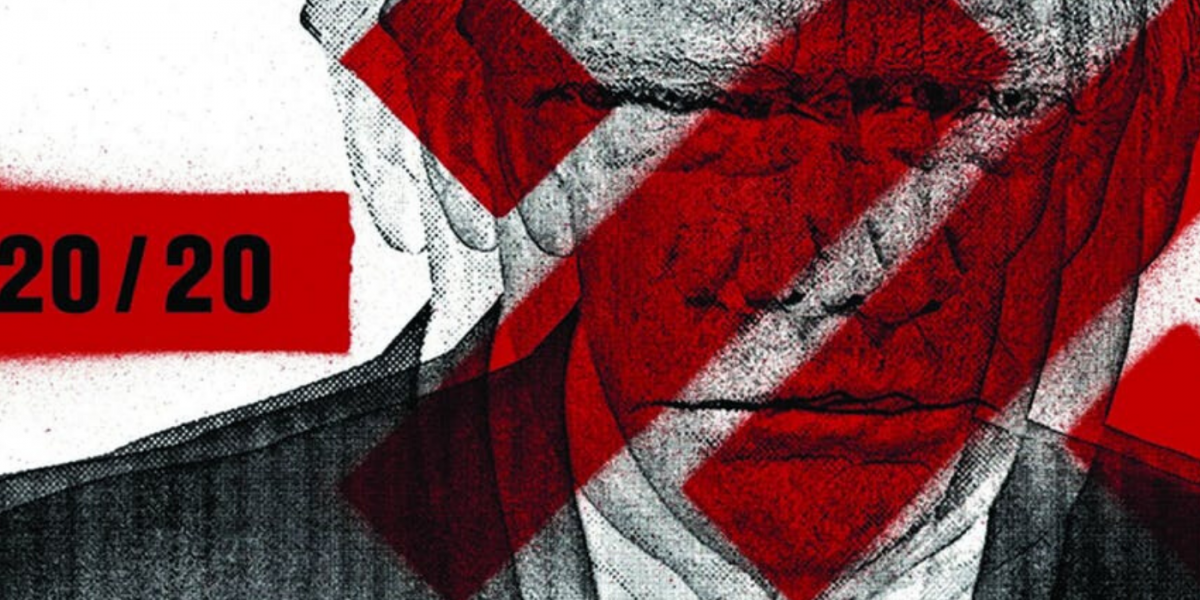 Pennsylvania punk rockers, Anti-Flag, are celebrating nearly 30 years of music by releasing their 13th studio album, 20/20 Vision. Anti-Flag have been producing top-notch melodic punk for their entire career, and have only gotten bigger and bolder with their last few albums. This new album is one that feels like their most important and impactful to date.

20/20 Vision is a follow up to 2017’s American Fall. While 2017’s release was as musically strong as the band has ever been, it didn’t quite capture the very direct and specific feelings of anger and outcry that were part of the cultural zeitgeist of the time. This is not a unique trend of the band or artists in general: many take time to elude to larger superstructures or systemic issues while not always calling out specific regimes or people. This is the fist time the band has both lyrically and visually pointed their musical output directly at Trump. From the first voice to the last note, this is a powerful album that points quite directly to where the cause and symptoms of oppression are coming from in 2020.

20/20‘s opening track, ‘Hate Conquers All’, samples Donald Trump speaking at a rally where he mentioned punishing protesters through aggressive means. Interview with U Discover Music, Bassist and vocalist Chris Barker mentions that “[Trump’s hate speech has] led to horrendous incidents in Christchurch in New Zealand, in El Paso in Texas and our hometown of Pittsburgh, where we had the largest anti-Semitic attack in US history at the Tree Of Life synagogue. In all those cases, people have taken guns into public spaces and murdered other people based on bigoted lies and the sort of fascist rhetoric that our current president and others like him are spouting.” The track itself is fairly standard Anti-flag fare: brooding and aggressive lyrics played over heavy and melodic punkrock. It certainly sets the album off right, but may not be the most representative of the lot. I feel the album actually goes a lot deeper and gives much more nuanced approaches to issues while also developing stronger musical themes.

“Christian Nationalist” is a wonderfully poignant song that holds no punches. On their website, the band gives a little background on both the song and some background for the lyric video. “History is full of wealthy and powerful people using religion and cultism to justify policies of oppression and inequality. Invariably, these policies target the most vulnerable in society so that elites can maintain their dominance. Today we see this same strategy employed by right wing politicians all over the world. Just as the anti-fascists of the 1930’s and 1940’s rejected the fascist ideologies of their era, we reject the neo-fascists of this era. Theocracy is dangerous and inherently anti-democratic because it restricts individual choice and provides an avenue by which politicians can claim a moral superiority over ‘the other’. It gives political cover and justification for policies and actions which might otherwise be deemed morally objectionable, inhuman, or adverse to the best interest of the country.” The site also lists Republicans who have accepted donations from the NRA and other lobbyist groups, as well as a list of mass shootings. Musically the track follows Anti-Flag’s more anthemic moments, prime for fist pumps and plenty of ‘whoa-whoas.’

“Unbreakable,” as well as “Don’t let the Bastards get you Down,” really make the album as powerful as it is. It’s these calls for unwavering strength in unity and optimism that stand out and make Anti-Flag as incredible and relevant as they are. It’s easy to feel overwhelmed by the acts of injustice and the oppression of capitalism, especially when it works to keep is divided. From the grief many are feeling for the ongoing destruction of our environment to the incredible violence faced by those most marginalized, music can play a key role in affirming our emotional reactions and providing solidarity and act as calls to action. “Whether we’re talking about the suicide rate for LGBTQ+ people rising alarmingly or the increase in race-related hate crimes, it seems like bigotry and hate is winning right now,” said Baker. “In the face of all that, ‘Unbreakable’ raises the question of how we take all this pain, move forward from it and make things better.” With exclamatory lyrics like ” What doesn’t kill us now / Will lead us back from Hell,” and a chorus of “Unbreakable / Unbreakable, today / Unbreakable / In every single way // Unbreakable / It’s time to face the world / Unbreakable / And I’m ready to feel / To feel the sharp shock of the phoenix rising,” one can’t help but feel like real change is coming and a better world is not only possible, but right around the corner.

The entire album, full of pointed anger and rage, also serves as a call for support in all of our struggles, be they personal or political, and find the commonalities we need in order to create a truly intersectional revolutionary movement. Anti-Flag’s strength lies in their unwavering attitude to be aggressively optimistic, passionate, and political. While 20/20 Vision‘s pointed lyrics are aimed right at Trump and company, as well as capitalism as a whole, the spark and energy of a rising mass-movement to challenge them is what carries this album. It’s my favourite release since 2012’s General Strike and a great album to jump onto for those who have never given the band a listen or haven’t for a while.

Check out http://www.anti-flag.com/ for album info as well as tour dates, merch, and more.