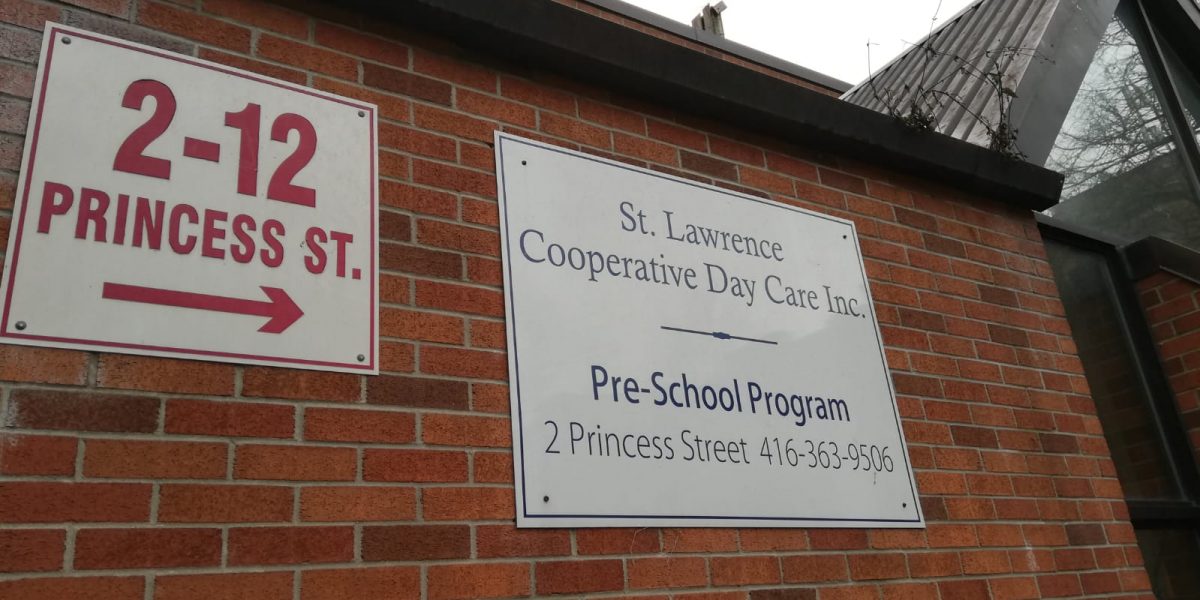 Workers and families at St. Lawrence Co-operative Day Care (SLCDC), a non-profit childcare centre in downtown Toronto, are facing a lockout imposed by the SLCDC Board of Directors.

Childcare workers across the sector face difficult conditions, but ultimately the workers are there because they want to be there. Workers at SLCDC are asking for what they need to keep doing the work they love to do–including paid programming and paid sick days. As SLCDC childcare worker Jason Quammie says, “Childcare is a labour of love. We’re just asking for help so that we can show that same care we show others, for our own families. We want to pay our bills and retire with dignity.”

SLCDC is one of many childcarecentres organized under CUPE 2484. CUPE 2484’s Raising the Floor campaign approaches bargaining across the childcare centres the local represents as a coordinated effort to repair the beleaguered childcare sector as a whole. By securing better conditions for childcare workers, the campaign is aimed at solving the workforce crisis in childcare—workers who are given the tools they need to fully dedicate their time and attention to each child are workers who don’t have to wonder if the job is worth doing.

For example, CUPE 2484 was able to secure ten hours of paid programming time per week per program for childcare workers at a different centre in Toronto, meaning workers there will be compensated for the time they need to set aside for the creating, planning, and other work that goes into running childcare programs. Paid programming time is so important that the City of Toronto itself offers funding for five hours per week per program of time for its non-profit childcare centres (including SLCDC).

As a union local, in CUPE 2484’s more than forty years of existence across multiple centres there have only been two strikes (one of which was in its very first bargaining period, the other of which lasted a single day). Even now, SLCDC workers do not want to go on strike, and in fact have not so much as held a strike vote. Despite this, the Board has moved to begin a lockout as early as December 5 instead of continuing to bargain, a move that sends a threatening message to the workers who make childcare happen.

The lockout notice comes after the Board of Directors tabled a contract proposal in August, workers made a counter-proposal on October 4, and received no counter-offer from the Board. Instead of continuing to bargain, the Board issued an ultimatum on November 10: accept their August proposal or face a lockout. On November 24, the Board officially gave the workers notice that they will be locked out as early as December 5 if they do not accept the Board’s proposal from August. While the workers want to keep the centre open and avoid any sort of labour stoppage, the Board’s proposal does not give them what they need to continue providing the best care that they can for children and families.

“[The lockout ultimatum] is a bully tactic and one that puts enormous pressure on a workforce that is already hanging on by a thread,” CUPE 2484 President Erin Williams says. “This move is more than shocking. To see that St. Lawrence Co-op Daycare would move to lock us out with little to no negotiation is not just rare for childcare, it’s terrifying.”

The Board’s ultimatum in place of bargaining is not just terrifying for the workers, but to the families they serve—many of whom live in co-op housing. To choose shutting down a childcare centre as the holiday season approaches instead of even bargaining with workers who are fighting for better conditions is a shocking decision that only serves to hurt workers and families alike. To quote CUPE 2484 Vice-President Jess Tomas, “To lockout employees at this critical time of the year is just horrible and the damage this does to the relationships childcare workers have with children and families will take a long time to repair. It will be chaos for everyone.”

Back to the table, back to supporting families

Parents and workers at SLCDC are staring down an ultimatum from a Board that has left the bargaining table. But the situation can be avoided altogether if the Board decides to retract its ultimatum and return to negotiations to get a deal done.

“We think we can reach a deal,” Quammie reports. “We’re not far off, but we need St. Lawrence Co-op Daycare to come back to the bargaining table and not lock us and families out.”

The workers at SLCDC are willing to bargain and reach a resolution to an all-around terrible situation in which they have been placed. Time will tell if the Board is willing to do right by their workers and families by sitting back down and hammering out a deal that respects everyone involved. In communications with parents, CUPE 2484 reports that it seeks “an agreement that we can all be proud of.” It’s time for the Board to do the same.

For those interested in asking the SLCDC Board of Directors to take back their ultimatum and return to the bargaining table, the SLCDC office can be reached at (416) 363-9425. Read CUPE 2484’s letter to parents at SLCDC here.