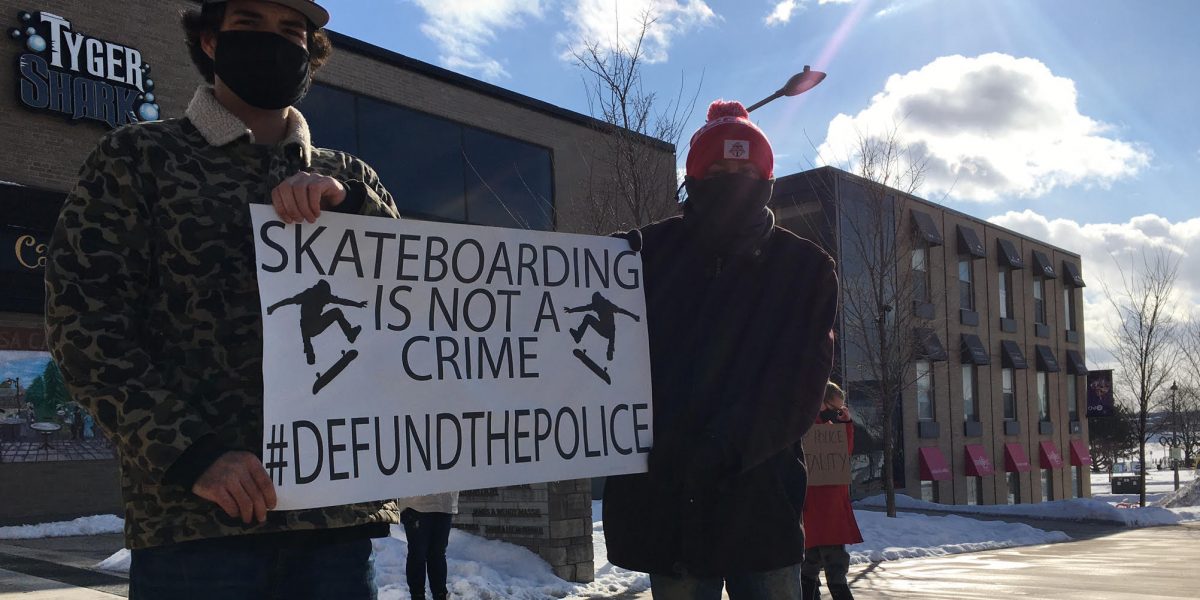 “Abolitionist approaches ask us to enlarge our field of vision so that rather than focusing myopically on the problematic institution and asking what needs to be changed about that institution, we raise radical questions about the organization of the larger society.” – Angela Davis

On Thursday, February 4, a video began circulating on social media showing a police officer in Barrie, Ontario, pinning a young man on the ground. To the audible shock and gasps of the people witnessing it, the officer is subsequently seen hitting the skateboarder with what appears to be an electroshock weapon before throwing him back to the ground and smashing his head into the pavement.

The outrage in the community – and across the country – continues to grow as residents demand not only punishment for the officer, but a reimagining of the entire policing system. The past few months have shone a light on the reality of policing – particularly for Black and Indigenous people. This latest episode of police brutality comes on the heels of a summer that has been described by many as a summer of reckoning. Following the racist murder of George Floyd in Minneapolis back in May, people in hundreds of communities across North America and around the world joined together to demand justice and an end to police brutality. Cities large and small saw their streets filled with voices crying out for change.

Last summer, hundreds of people marched through the streets of Barrie demanding action at two consecutive massive rallies. Coincidentally, these rallies took place in the same spot where last Thursday’s incident of extreme police violence took place. This reinforces the ongoing demand to defund and abolish policing in our cities and towns. Unfortunately, politicians are opposing this vision.

Recently, Barrie city council met to consider its budget. The community expressed overwhelming support for reducing the police budget in the city’s own online budget tool, as well as an online petition that had more than 1,000 responses. Despite this democratic engagement, and despite the city asking its stakeholders and departments to keep any budget increases below 2 percent, the police services board asked for a 2.65 percent increase. Bowing to the pressure of the police and their self-interest, council approved the increase even though this is the exact opposite of what the community has been calling for.

Clearly, reducing the power of the police and their role in policing capitalism is not something people in power want to do. Policing is a system rooted in racism, settler-colonialism, and the elevation of one class over the communities that our system has made vulnerable. It serves and protects property, not people.

We have a system of laws, but not a system of justice. Our system doesn’t allow someone experiencing homelessness to live in an empty apartment, but it uses the police to enforce evictions – even during a pandemic. Our system arrests a mother who is forced to steal bread to feed her family, but it does nothing to punish corporations who steal wages from their workers. A system that was rooted in true justice would be doing the opposite.

Defunding police is more than just reallocation of money, it’s a human rights issue. It’s about how we as a society prioritize services and how we treat each other. We must imagine our communities as places where everybody is supported, and police and prisons are unnecessary.

Policing and incarceration make our communities less safe because they take resources away from programs and services that actually prevent crime. In the case of Barrie, a 50% reduction in the police budget would be more than $28 million. Imagine what a community could do with $28 million a year? We could make massive investments in social housing and community programs, care for people experiencing homelessness, better the lives of seniors, offer free transit, make the investments needed to fight climate change – the list goes on and on. We can do better, and this better must include defunding the police with the goal of complete abolition.

But we know that capitalists use institutions like the police to defend a system that exploits working people and that perpetuates racial oppression. They are not interested in a system that works for all. In fact, they benefit from this system that pits us against each other.

Destroying capitalism, and radically reorganizing society, requires defeating the ideas and institutions used to control and oppress people. Policing – as we witnessed through the brutal violence inflicted upon a young man in downtown Barrie last week – is one way to maintain this control and, therefore, must be abolished. There’s a mood for change in cities and towns across Canada. Our “leaders” may choose to ignore it, but we must not – and will not – stop fighting for it.