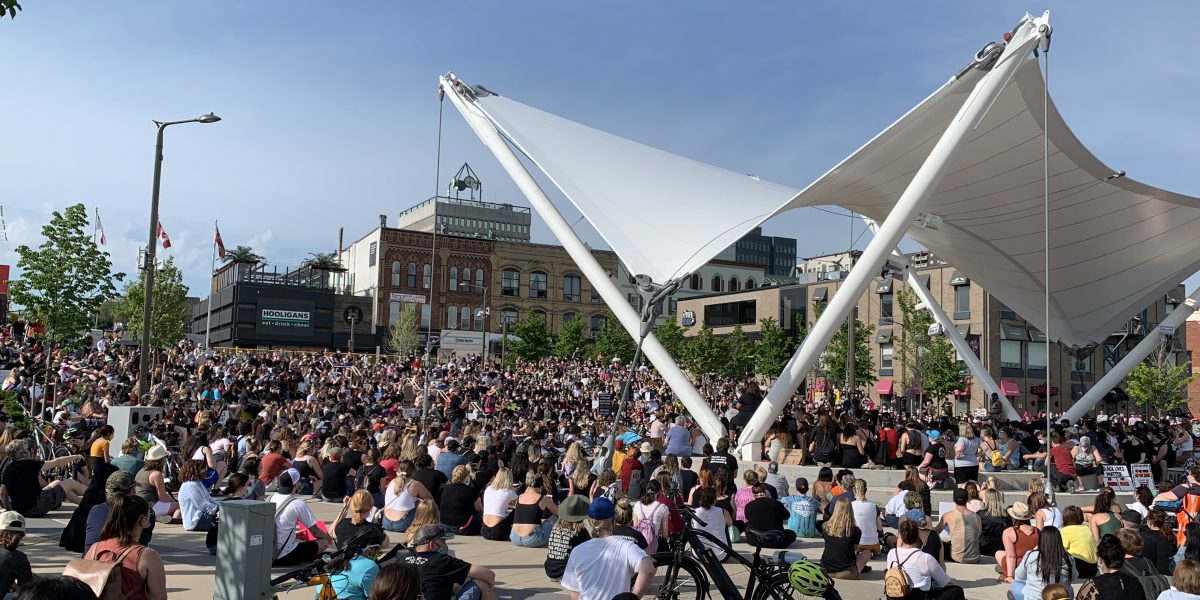 Last month, the people of Barrie – a city of about 150,000 people located on the shores of Lake Simcoe, north of Toronto – witnessed two of the largest public rallies the community has ever seen.

The hundreds who attended (attendance at one was estimated to be more than 1,000) were calling for an end to anti-Black racism, justice for members of the Black community and the defunding of the police. In the days that followed the death of George Floyd in Minneapolis – and amidst Black Lives Matter protests happening around the world – the people were voicing their anger, outrage and disgust with a system that has made the world unsafe for so many people.

There was, and remains, a sense of frustration over previous reforms of the police. These reforms have done nothing to reduce police violence or increase accountability and have actually led to more officers, militarization and grossly inflated budgets. The voices of protest filled the streets. Emotional stories of harassment, intimidation and violence by the police were the only words able to silence the crowd.

In the aftermath of the protests, members of the Black community stepped up, as they have done for years, to demand change, while also launching important initiatives to assist youth, support Black-owned businesses and amplify voices.

Most local politicians tried to say the right things, without promising the kind of change the people cried out for.

Keenan Aylwin was the exception.

A hard line against the “Thin Blue Line”

In a letter sent to members of the Barrie Police Services Board, Councillor Aylwin called for a “difficult conversation” about the police budget. He wanted to see how money could be reallocated to programs that would address the many social issues – such as poverty and addiction – that are plaguing the city. Members of the board, including Mayor Jeff Lehman, responded by calling for better communication and public education of the work currently being done by Barrie police.

That didn’t sit well with Aylwin, who was able to reiterate his point at a General Committee meeting on June 29.

“There is clearly a desire in the community for action on this front. The reality is that, here in Barrie, nine out of 10 calls to Barrie police are non-criminal in nature,” he told his fellow councillors. “And we know that some of these calls can end up in tragedy. We’ve seen this happen across this country and around the world.

“(Police) are dealing with issues that should be dealt with by other services. What people are asking is whether we should rethink that. Whether we should have an armed officer responding to these calls in the first place. Instead, we could have more robust social services, and invest in the root causes of some of these issues that we see here in our community.”

At the June 29 meeting, Aylwin put forward a motion to amend the 2021 Business Plan and Budget Directions document. This came on the heels of a public call for a 10% reduction to the police budget published through the city’s online suggestion platform. This mechanism provides the chance for citizens to make public calls for action. If a request gets 500 votes, the council must consider it. The demand for a cut to the Barrie police budget received more than 1,000 votes in less than 48 hours.

Councillor Aylwin’s motion, in part, asked that “the Barrie Police Services Board be sent a letter from the city treasurer requesting the provision of a 2021 budget request that is a minimum of 10% lower than the 2020 net municipal tax funding provided to Barrie Police Service in the 2020 approved budget, as well as a line-by-line accounting of their 2021 budget request.” It also asked staff to look at how a reallocation could be invested in things such as community-led alternatives to policing, anti-racism education, affordable housing, social and community services, skills training and food security.

Aylwin’s motion was defeated 8-2, with only Deputy-Mayor Barry Ward giving his support.

Instead of actually addressing concerns of anti-Black racism and anti-Indigenous racism, councillors opposed to a reduction to the police budget fell back on arguments of safety, jobs and the livelihoods of police officers, and the belief that only reforms such as accountability, were needed. Some councillors called for better training, while others said the answer should be more “boots on the ground” in order to make people “feel” safe (a body camera pilot project recently launched in Barrie must have them salivating).

Aylwin responded by saying that the idea of safety isn’t the same for all people. Capitalism ensures that police protect property and make a specific segment of the population safe, while others experiencing homelessness or battling an addiction only feel safe when they have access to the social services and programs they need.

As proponents and representatives of the status quo, Barrie’s politicians fail to see how the system of policing is polluted by a history and culture that can’t be reformed. There is simply no denying that the roots of policing are found in racism and the oppression of working people.

Vladimir Lenin described police as the armed wing of the state – the state being “an organ of class rule, an organ for the oppression of one class by another.” Sociologist and writer Alex Vitale described policing as a tool of social control that facilitates exploitation and manages (warehouses) populations deemed “suspect”.

“The origins of policing occurred in direct relationship to the three primary systems of economic exploitation during the 19th century – colonialism, slavery and the rise of industrialization,” Vitale said recently. “Policing developed to make those regimes of accumulation and exploitation possible.”

This is why defunding the police must be more than just reducing its budget, and why it needs to go beyond reallocation. Outright abolition must be the goal, with a new system of public health and community safety built in its place. Police can no longer be used to bandage every social problem.

As socialists, we can’t lose site of what needs to done. Reforms being proposed by status quo politicians only serve to legitimize a system that produces the very things they say police are there to alleviate. The truth is that police, whether in Barrie or Toronto, can’t solve the problems created by capitalism and the associated wealth inequalities. They are part of them. So, we must focus on the institutions, not people’s attitudes towards them.

For some, Barrie may seem like an odd place to start a movement to defund the police. But with the budget process just getting underway, proponents of a reallocation of police funding, such as Councillor Aylwin, remain hopeful and will continue to push decision-makers.

The police have become such a big part of the capitalist system, it is sometimes difficult to fathom society without them. It is the job of socialists to respond to the call to defund the police by providing support to those on the front lines of the fight. We must help people embrace this revolutionary moment, while showing others that it is possible to create institutions and community infrastructure so that we don’t need violent institutions like the police anymore.

The protests of last month have forced Barrie city council to respond. A new anti-racism task force has been created, and it’s providing some hope. But, unless it embraces the idea of anti-racism as revolutionary politics, its ability to usher in significant change in Barrie will be severely limited.

Antonio Gramsci famously said that “the old is dying and the new cannot be born”. This is what we seem to be witnessing in cities like Barrie. There is a hunger for a better system, but politicians wedded to the status quo are doing everything in their power to stop a better society from being realized.

“I know it’s hard for some of us to imagine what alternatives to policing look like,” Aylwin wrote on Facebook last month. “But if we aren’t going to imagine different and better futures in this moment, then when would we? Now is the time.”