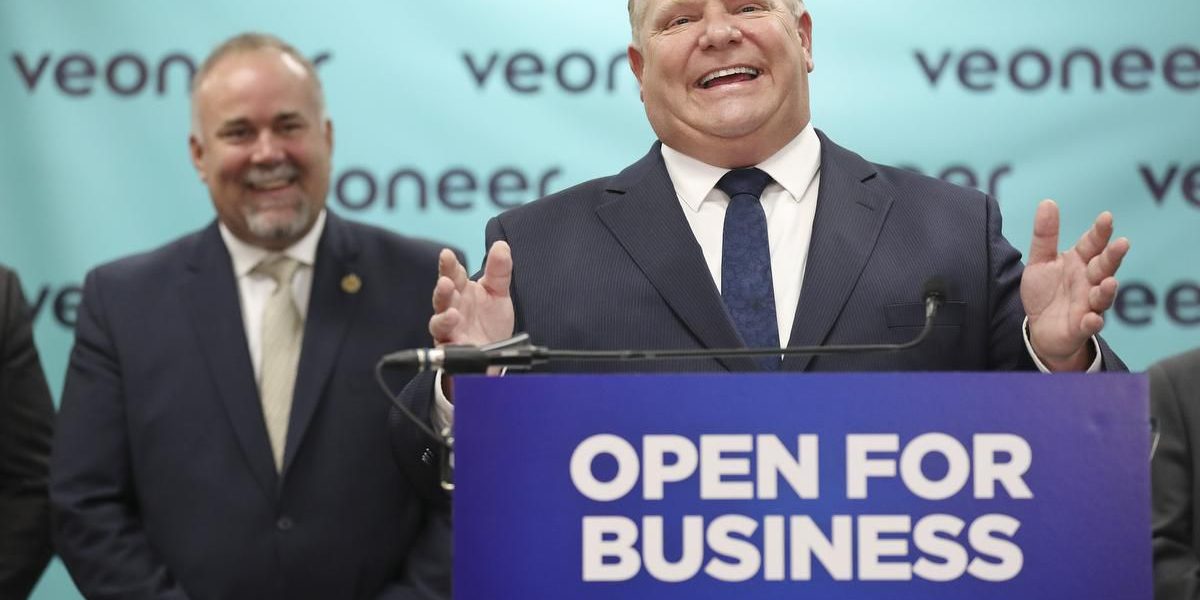 With the provincial government’s invocation of the notwithstanding clause to overturn a court decision that ruled Bill 254 as unconstitutional, it seems that Ontario Premier Doug Ford is hellbent on ensuring that no one can remind voters of how he and his government have monumentally screwed up this year before the next provincial election in June 2022. Bill 254 would expand restrictions on third-party advertising from six months to 12 months, a restriction on freedom of expression that Justice Edward Morgan ruled as unconstitutional.

Make no mistake, Bill 254 is meant to target trade unions, including the Working Families Alliance, who have held Conservative candidates and incumbents accountable during past elections. Ford is worried about the public being reminded that his time in office has been a testament to almost incomprehensible incompetency alongside a sadistic commitment to the welfare of corporations over human beings.

In recalling the House to pass Bill 254, Government House Leader, Paul Calandra, noted that “that is what we believe is needed to ensure fair elections in the province of Ontario”.

Fair for who though?

In trying to spin this attempt at muzzling oppositional forces as an act of fairness, right-wing pundits, like Sun News columnist, Brian Lilley, are suggesting that this change is needed to temper the power of unions who supposedly have too much influence in shaping public opinion. “If large corporations were spending as much as, or more than, political parties, then there would be calls from these very same unions to bring in spending restrictions.”

Here, Lilley makes two mistakes. First, he vastly underestimates how much money corporations spend in influencing the public and politicians in pushing for policies and politics that benefit Big Business. Oil, finance, the mining industry, the arms industry and others spend billions of dollars every year bankrolling ultraconservative ‘grassroots’ groups (e.g., Ontario Proud) and free-market think tanks (e.g., The Fraser Institute) to manipulate public opinion, while funnelling money to politicians via political donations in an effort to coerce, threaten and influence them into crafting policies that benefit these corporations.

How else can we explain Ford’s dogged determination to avoid legislating universal paid sick days despite widespread calls from medical experts in the province? Since the beginning of the pandemic, wealth inequality in the province has only grown, yet Ford is so worried about how billion-dollar corporations are going to pay for paid sick days that the province has decided it will reimburse all employers, regardless of their size, for the cost of these sick days up to $200 per day. From the beginning, Ford’s modus operandi has always been to “make Ontario open for business”, not to make Ontario better for Ontarians.

Second, Lilley makes the mistake of conflating the self-interest of trade unions with that of corporations. What he willfully ignores is that trade unions are democratic organizations that represent the demands of workers, while corporations are top-down behemoths driven by the demands of profit-hungry shareholders. Why should we ever have to accept that both deserve to have equal power and presence in public life?

Bill 254 was never about fairness; it is about ensuring that Big Business and their political allies have an undisputed advantage over workers and trade unions in determining who governs this province and how.

Maybe it’s a good time to remind ourselves of some of Doug Ford’s more significant failures over the past year before his government tries to censor all his critics.

Initially dismissing paid sick days as a “waste of taxpayer money”, Ford’s government voted against paid sick days 25 times in 2021. Ford remained committed to the position that the federal CRSB (Canadian Recovery Sickness Benefit) was sufficient for workers’ needs, despite widespread calls from physicians and medical experts that immediate and universal paid sick days were needed to curb the transmission of COVID-19. It was only when public fervour reached a peak in support of paid sick days that Ford’s government rolled out the unimpressive and insufficient alternative of three paid sick days that employers won’t be on the hook to pay for and that will be repealed after the pandemic is over.

Seniors don’t even have adequate air conditioning within long-term care homes, much less a completely revamped not-for-profit system that would prioritize their health and wellbeing over that of returns for shareholders. During the pandemic, Ford has gone out of his way to protect long-term care home operators by introducing a bill that provides liability protection for operators that made “an honest effort” to follow public health guidelines and laws, while cancelling a promised investigation into the standards of care at long-term care homes. With 70% of all COVID deaths occurring in long-term care homes, and a report from the Canadian Armed Forces that detailed “patients with ulcers with soiled sheets left bed-bound . . . dehydration, cockroaches and staff moving unit to unit in contaminated gear”, it’s clear that many homes are committing gross negligence akin to manslaughter. This is a crime the Ford government seems all too happy to be an accomplice to.

3. Making martyrs out of educators

In accusing teachers of ‘playing politics’, being ‘part of the problem’ and lying to suggest that teachers unions had filed an injunction that would prevent schools from opening, Ford seems to have spent much of the pandemic trying to pit the public against educators rather than creating a safe learning environment for teachers and students. Ford’s government blocked school board’s plans to reduce average class sizes that would have allowed for better social distancing as well as refrained from providing needed funding for additional custodial staff to help in the maintenance of hygienic conditions in schools.

4. Fomenting racism in the province:

In an attempt to deflect blame from his government’s complicity in the rising number of COVID-19 cases in the province, Ford turned to Trudeau, questioning why he didn’t shut down the borders. “If I had the power, I would shut down Pearson airport immediately”. This rhetoric, alongside an ominous video ad of a plane converging on Toronto, further fueled racism in the province as racialized people were portrayed as primary vectors of disease and a threat to the heath of white nationals. With his racist scapegoating, it can be no wonder why Ford was booed when he attended the vigil for the family who were victims of a racist terrorist attack in London, Ontario.

In April, Doug Ford tried to give the police special powers to arbitrarily stop and interrogate anyone seen to be outside their home at any time of day in an attempt to enforce public safety measures during the lockdown. After public backlash and the issuance of multiple statements from police departments stating that they would not be arbitrarily stopping people, Ford was forced to back down and apologize for this ill-advised move. If implemented, racial profiling and the abuse of police powers would have only increased under the purview of ensuring public safety.

Despite working extended shifts, taking mandatory overtime, isolating themselves from their families, and watching COVID-19 patients die on a daily basis, Ford’s Bill 124 effectively forced nurses to take a pay cut this year. By restricting wage increases to a maximum of 1%, Ford’s government ensured that nurses’ wages didn’t even keep up with a 2.2% increase in inflation. Because Bill 124 put a cap on total compensation, nurses couldn’t even bargain for mental health support or sick leave for part-time employees.

After promising that no one would be evicted during the pandemic, Ford has made it easier for landlords to turn tenants out on the street during a public health crisis. Bill 184 sped up the evictions process by removing tenants’ right to raise concerns at hearings without advance written notice, while allowing landlords to evict tenants without a hearing if they failed to adhere to the conditions of a repayment plan determined unilaterally by the landlord. In moving hearings online, tenant allies were able to tune in to watch a landlord attempt to negotiate with a child on behalf of her mother and order a deceased person to pay arrears. Public outcry in response to this inhumanity led the Ford government to introduce a bill that would allow the province to fine anyone who recorded or shared these meetings up to $25,000.

To be clear, Bill 254 is Ford’s desperate attempt to make sure that none of this history is rehashed to the public before an election. He’s hoping that we’ll just forget this past year and how the mishandlings and misdirections of his incompetent, corrupt, and homicidal government lead to thousands of needless deaths in the province.