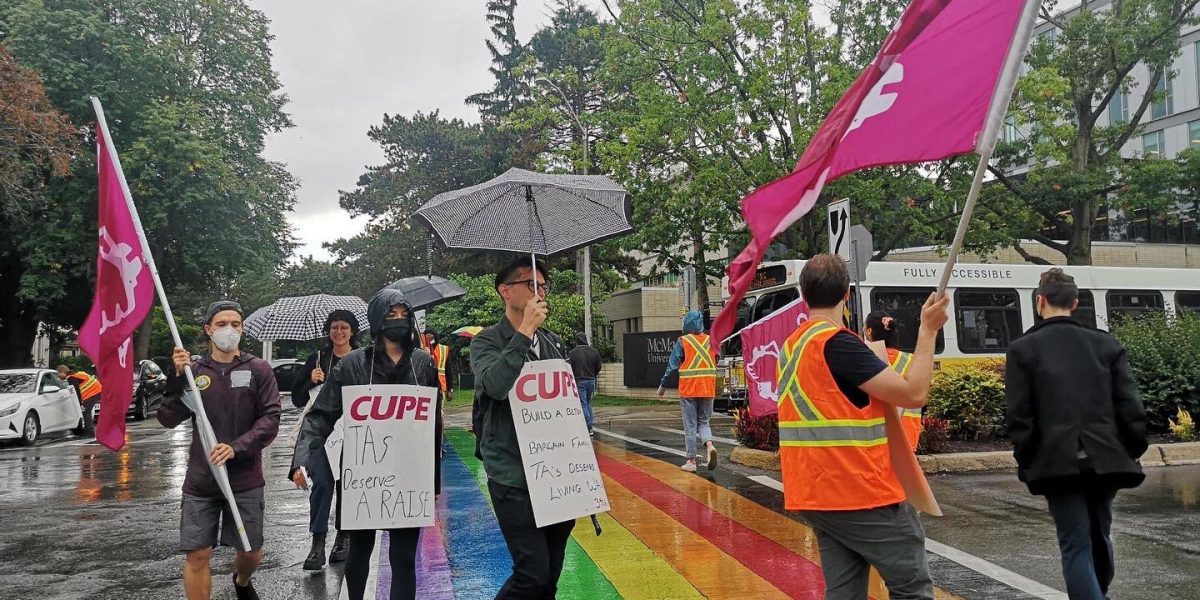 CUPE 3906 is gearing up for potential job action at McMaster University. Representing Teaching Assistants, Research Assistants-in-lieu, Sessional Faculty and Postdoctoral Fellows, the members are challenging years of poor treatment by the university. Spring’s Alex Kerner had a chance to interview the local’s president Chris Fairweather, a Teaching Assistant and PhD Candidate in the School of Labour Studies, about where things are at and what happens next.

How has the university treated your members in recent years?

The university’s treatment of its contract academic workers has been pretty rough in recent years. At the outset of the pandemic, back when everyone was plunged into all this uncertainty, the university decided to take advantage of what they saw as a loophole in our contract that would allow them to remove any TA working outside of Ontario from the bargaining unit. As far as we’re aware, they’re the only university to have attempted this. It was only 8 months later and facing the threat of arbitration that they backed down and agreed to let everyone back in. I think there’s just a general lack of respect for the union and the role it plays in protecting and advancing the interests not just of contract academics, but the university as whole.

What are the big issues that are important to your members in this round of bargaining?

Well, like everyone else in the province, our members have serious concerns with the rising cost of living, and we’re pushing hard for extended work and funding guarantees and protections against tuition increases in the form of reimbursements. We’re also pushing the university to close the massive pay gap between graduate and undergraduate TAs. Graduate level Teaching Assistants earn just $11,500/year, and our wages have been capped for the last three years by Bill 124. Meanwhile, the cost of things like rent and groceries is skyrocketing. People are dropping out because they just can’t afford to stay, and more people will do so if we can’t win a fair pay increase that keeps up with inflation. For undergraduate TA’s it’s even worse, because they’re paid like 40% less for the same exact work. The university’s proposed solution for grad students who are struggling has been to quietly change the rules and just let us work more hours elsewhere, but good luck finding a job off-campus that lets you work 10 hours a week and pays the $30 an hour you’d need to get to bring your earnings up to a livable income for the city. Either way, it means people need longer work guarantees, because it’s obviously going to take us way longer to finish our programs.

How has bargaining been going up to this point? What are the outstanding issues?

We’ve made some progress in other areas, for sure. The university’s agreed to more benefits money, including money to sustain our gender affirmation fund and establish a new fund for reproductive health. There have been some other more minor improvements as well, but in general the big outstanding issues are fair wages, extended funding, protection from tuition claw backs, and closing that pay gap between grads and undergrads. Honestly, we feel like we could’ve been a lot further ahead in bargaining by this point, but the university kept us waiting for 4 months before they showed up at the table, and then they told us they wouldn’t be ready to talk about anything monetary until the end of September, when our agreement was already expired. They’d be very happy to drag this out forever, but inflation is eating more and more into our income with every pay period that goes by without a new agreement.

How have you mobilized your members in support of bargaining and potential strike action?

We started surveying the membership about their priorities back in the spring, but really it goes back a lot further than that. People were not impressed with Bill 124. So we’ve spent the last few years trying to build up our stewards network, revitalizing our committees and working groups, and trying to build a sense of attachment to the importance of the union. We launched a campaign over the summer to call attention to the dire need for better minimum overall funding for grad students at Mac, which the university ignored, but it allowed us to find more and more of those members who were struggling, hear their stories, and continue to build a larger active membership. Getting ready for the strike vote and now the possible strike action, a lot of those people have been stepping up doing a ton of door knocking, phone banking, and organizing events in departments to bring people together.

What are the next steps if an agreement isn’t achieved?

Without an agreement that helps all TAs get ahead rather than continuing to fall further behind, we’re going to be taking job action. We’ve done the open letter thing. We’ve tried talking to the university. We know they know there’s a problem, but all we’re hearing is that we need to be patient, because they need to do consultations and stuff before they can raise the funding floor to try to help us out. Last time it took like three years of consultations. We’ll all be gone by then. We’re struggling now and the university has the resources to give us everything we’re asking for without hardly a dent. We’re 1/3 of the workforce at McMaster, but our wages are only 3.7% of the payroll. There’s no reason not to just offer us a higher wage increase and extend our funding by a year, aside from just the principle that they don’t think we deserve it, or they don’t think they have to. If it takes a strike to get them to understand how much people are struggling, that’s really sad, but we’re ready to do that if we have to.

Have your members been inspired by the recent CUPE education workers work action?

Yeah, I think so. This is another group of important education workers who are living on the brink of poverty, just like many of us are, who are standing up for themselves and demanding better. It’s inspiring to see so many people come together like that, support their union and their coworkers, especially in defiance of someone like Doug Ford.

How can members of the Hamilton community and/or labour movement do to show support for your members?

Just take the time to understand our issues and cut through the noise. I think a lot of people think of university students as a bunch of privileged kids, and I’m sure seeing TAs strike for better pay will hit some people the wrong way because of it, but what we’re literally fighting for is a more affordable university. You shouldn’t have to win a SSHRC to get by here. You shouldn’t have to have wealthy parents. You should be able to afford to pay the rent and buy groceries. If we end up on strike, come to the picket lines and show your support. University is isolating, especially these past few years. People will appreciate seeing members of the community come by and say they care and they support what we’re doing. More tangibly, people could definitely call the university president, David Farrar, and voice their support.