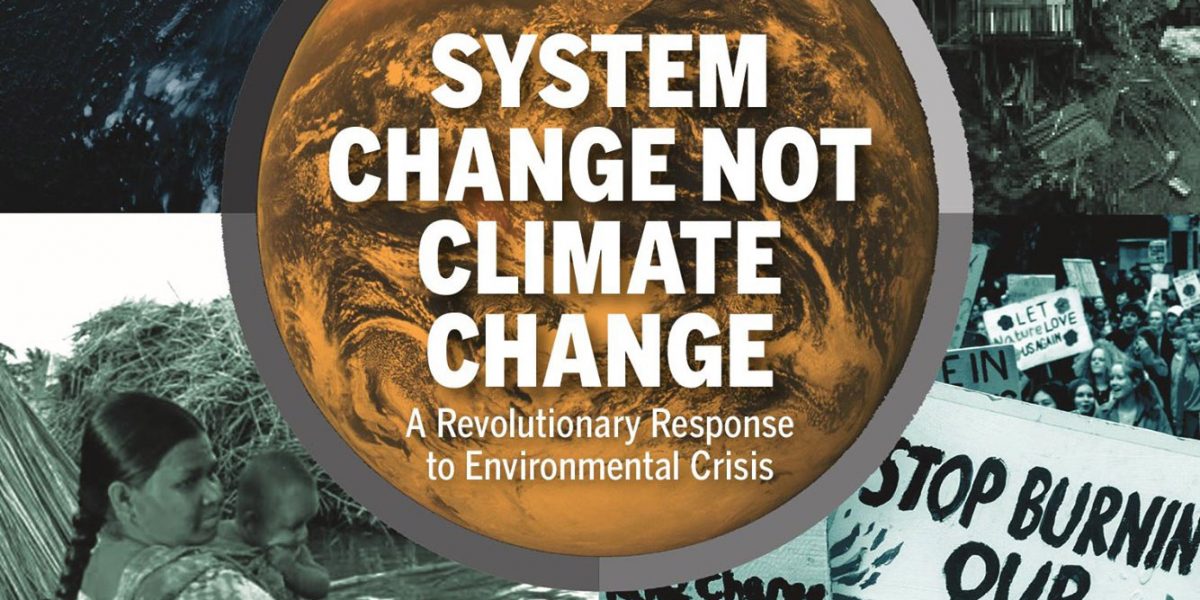 If you’re looking for an accessible summary of revolutionary theory and practice related to the climate crisis and how to overcome it, this book is a must-read. We see bigger than ever numbers taking to the streets around the world to demand immediate action from their governments. And as the movement grows, so do the number of debates about causes, solutions, strategies and tactics. While the demand of “system change not climate change” is gaining traction, we need a deeper understanding of what the system is and how a revolutionary response – not just any “change” – is needed.

This book contributes to this understanding by exposing the dead end of capitalism and pointing to the socialist alternative. The writers build on recent literature highlighting the essential contributions made by Marx, Engels and others about both ecology and the unique, revolutionary role of the working class.

The book does not shy away from tackling important debates happening in the climate justice movement. In “Marxism and the Anthropocene,” for example, Camilla Royle summarizes debates about the Anthropocene, ranging from when it began, to the role of human agency, and even to the word itself, drawing on authors as diverse as Jason Moore and Andreas Malm.

Another debate – taken up by both Kohei Saito’s “Karl Marx’s Idea of Ecosocialism in the 21st Century” and Ian Angus’ “The Discovery and Rediscovery of Metabolic Rift” – is whether Marxists have anything useful to say about environmental issues. The industrialism of states like the USSR and China, that call themselves socialist, has left most greens skeptical.

It has only been recently that writers have rescued Marx’s manuscripts. They show not only how soil depletion, deforestation and stock farming contribute to environmental crisis, but how class struggle is essential to topple capitalism. Angus quotes Marx, who provided one of the first ecological critiques of capitalism:

“[capitalism] disrupts the metabolic interaction between man and the earth [and generates] an irreparable rift in the interdependent process of social metabolism.”

In “Natural Capital: A Neoliberal Response”, Ian Rappel takes issue with the concept of natural capital, where “nature and the ‘natural world’ [are] approached in terms of asset values.” This controversial approach is commonplace with the conservative end of environmental NGOs and the corporations and governments with whom they like to negotiate.

Martin Empson’s “Food, Agriculture and Climate Change” connect the book’s more theoretical pieces with those addressing grass-roots campaigns. He de-bunks claims in the film Cowspiracy as to the proportion of CO2 emissions caused by consumption of meat. Empson notes the success and limitations of peasant agriculture and movements for land control, but argues wholesale change “will require the development of wider alliances that can directly challenge the capitalist agriculture system.”

Campaigns, the movement, prospects for change

Building on the concept of mass action, the last third of the book looks at specific climate issues and campaigns, the state of the climate justice movement, and steps for building a sustainable society.

“Capitalism and the Biodiversity Crisis”, by Sarah Ensor, examines “the sixth extinction”, and notes “…what links biodiversity crisis to industrial meat production, deforestation, overfishing, rising temperatures and extreme weather events is capitalism’s drive for profit.” She states that current campaigns for “rewilding” are much more likely to succeed under socialism, where “we won’t force other life forms to compete with capital and its profit motive.”

Amy Leather’s “Why Capitalism Loves Plastic” comments on companies like ExxonMobil and Shell, which produce both fossil fuels and plastics, with this memorable quote:

“Perhaps nothing sums up the irrationality of capitalism more than this – materials that can last practically forever are used to make products designed to be thrown away.”

Carolyn Egan’s and Michelle Robidoux’s “Canada’s Tar Sands, Indigenous Sovereignty and a Just Transition for Workers” describes how the fight to stop pipelines carrying the world’s dirtiest oil is led by indigenous peoples. The authors insist that fossil sector workers be given a just transition from their current employment, and the discussions around the Green New Deal (GND) – that link labour, indigenous sovereignty and equity demands – are part of the way forward.

Suzanne Jeffery also discusses just transitions in “Up Against the Clock: Climate, Social Movements and Marxism”. While she celebrates Extinction Rebellion and student strikers, she emphasizes the importance of increasing mass working class participation, which is essential to the movement. But her claim of popular union support in the US for the Green New Deal misses unions in the fossil sector and building trades – plus the AFL-CIO – which oppose the GND because the just transition strategies are too vague.

Empson’s “Can we build a Sustainable Society?” exposes the limits of some climate activists, like Naomi Klein, who build their hopes on a rational form of capitalism. Empson shares Marx’s perspective that class struggle is needed not only to replace capitalism, but to ensure workers “…put themselves back in their rightful place, as a part of nature, labouring and changing the world around them in the collective interest of people and planet…”

While Royle’s section includes some coverage of climate geoengineering, an entire chapter is warranted, given the prominence given to this in, for example, the 2018 IPCC report. Similarly an entire chapter devoted to just transitions would be useful, especially given the air time being given to this in GND discussions. Examples of successful just transitions and the (more common) less successful ones would be instructive.

Those matters aside, this book is ideal for everything from reading clubs to guides for working class action. Read it and put it to use as soon as you can!

You can order the book from Bookmarks

An edited version of this review appears on climateandcapitalism.com