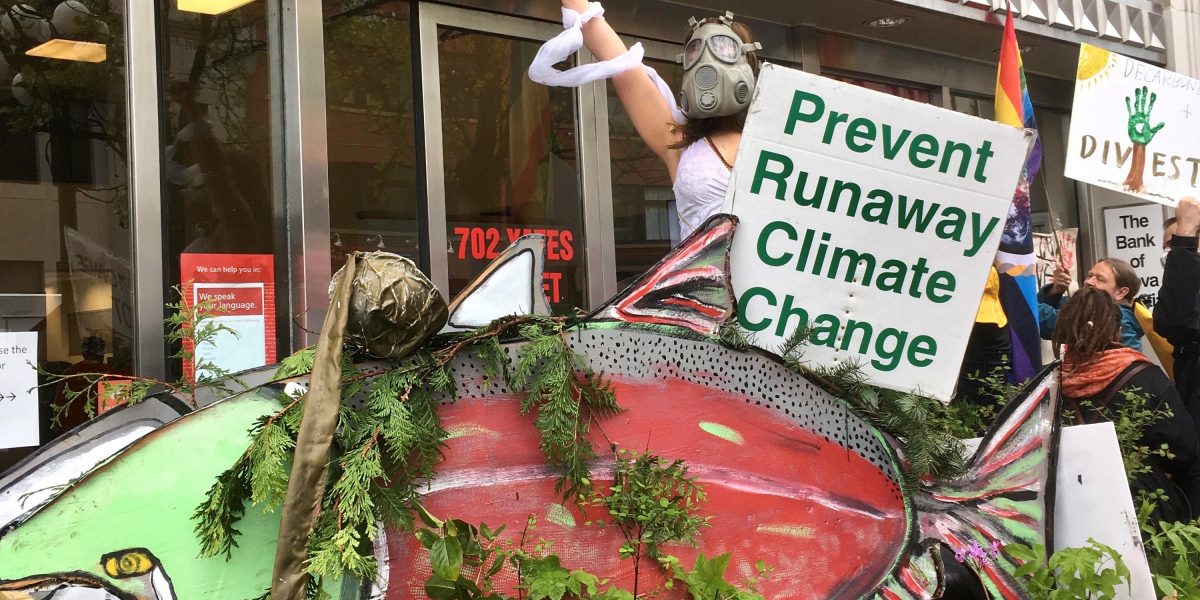 For two weeks in April, Extinction Rebellion (XR) mobilized tens of thousands into the streets around the world in non-violent, civil disobedience. This was an “International Rebellion” demanding real action from governments to address the climate emergency. The largest action was in London, England, where XR propelled the issue of climate change onto the front pages of newspapers and into news headlines day after day.

XR’s strategy involved large- and small-scale disruptive acts of civil disobedience that were as creative as they were brave. Defying police orders, climate activists occupied four central intersections in London continuously for over a week. The occupations also involved mass assemblies for participants to discuss the direction and future of the XR movement. In a powerful statement of conviction, over 1000 participants refused police instructions to stop the occupations or actions and were arrested. London’s police chief said she had never experienced anything like it in her career.

Launched in England last October, XR has been creating an open, imaginative, and inviting movement that is reaching out to, involving, and uniting many people into collective, grassroots action in trying to achieve net-zero carbon emissions by 2025. Central to the appeal of XR is its “the time for talk is over” urgency. They are right in saying that the time for more communiques from high-level climate conferences of world leaders and NGOs is over. The time rather is for ordinary “citizens” to rebel in order to compel governments to take meaningful, concrete action to avert catastrophic climate change.

Appealing to a broad audience, XR so far has had just three basic demands: that governments declare a climate and ecological emergency, that governments halt biodiversity loss and reduce carbon emissions to zero by 2025, and for a Citizens’ Assembly to democratically work out solutions to climate change. It’s bold and uncomplicated.

XR’s tactics are also broadly appealing. More and more people agree with XR’s view that “approaches of voting, lobbying, petitions and protest have failed because powerful political and economic interests prevent change.” Instead, XR focuses on non-violent, disruptive civil disobedience. That has included disruptive urban street and bridge occupations, blockading buildings such as banks. Some novel actions have attracted much media attention, included individuals gluing their hands to doors and vehicles, disrupting commuter rail services, and a squad of activists getting naked in the British Parliament.

In addition, XR deliberately invites, or clearly risks, arrest by the police. XR places importance on arrests for media attention as well as a public sympathy benefit. Those who are willing to be arrested are provided with training and support. However, participants are not required or expected to get arrested. XR sees a role and values all participants whether they risk arrest or not.

What’s clear from many media interviews of participants at the growing XR actions is that many are being drawn out to protest for the first time. So in addition to enjoying some important successes, XR is also bringing in and providing experience to new activists.

Now, and not surprisingly, the more success XR has experienced, the more some have found fault with its tactics—from the right and the left. The predictable criticisms of the right usually end with a call for a more aggressive police response. Ironically, this will probably further XR’s arrest tactics and exposure!

There are also legitimate concerns raised by left voices, mostly about what’s missing or problematic in XR’s tactics. None, it should be argued, are so problematic as to warrant not joining in their protests or discouraging others to do so. Rather, instead of widening divisions, XR appears to be a place to work through potentially divisive problems and deepen solidarity.

It has been pointed out, for example, that XR does not highlight the uneven climate consequences that are a legacy of western colonialism and imperialism and, perhaps worse, it is claimed XR is eclipsing long-standing anti-colonial and Indigenous climate justice struggles. Likewise, XR’s “get arrested” and “liaise with the police” strategies are critiqued as demonstrating a white-privileged disregard for the experience and political struggles of people of colour. Indeed, it is difficult to find these issues highlighted on the British XR website.

But the conclusion should not be to simply reject XR for these flaws. Rather, XR has proven to be a place where various struggles can unite in opposition to climate change. For example, XR has recently spread to the US where it has developed its own, new fourth central demand found on their front page: “a just transition that prioritizes the most vulnerable people and indigenous sovereignty; establishes reparations and remediation led by and for Black people, Indigenous people, people of color and poor communities for years of environmental injustice…”. XR is proving to be an adaptable, open and grassroots model that can, as in the North American context, take in the lessons of recent and ongoing struggles like Black Lives Matter, Idle No More, and Indigenous resistance like that at Standing Rock and in the Wet’suwet’en Territory. Some indigenous activists have even taken up XR’s open invitation to make use of its organizing tools to set up ‘Indigenous Solidarity Rebellion (@IndigenousXR)’ — self described as “Water Protectors and Extinction Rebellion join together”.

It’s easy to raise criticisms with other aspects of XR: Too middle-class. Naive about the police. Too apocalyptic. Cozy with wealthy donors. Doesn’t call for nationalizing the fossil fuel sector or taxing the banks. Doesn’t relate to trade unions. Some are true enough; there are strains and contradictions in any growing movement. The movement will certainly require greater social force, most notably from organized labour, to challenge the economic system that created and perpetuates the climate catastrophe. But right now, growing numbers of people are beginning to take part in bold actions which are pushing demands that go to the core of the capitalist system. Dismissing XR and the new people attracted to its actions would be recklessly undermining a movement where people’s confidence to challenge this system is currently being raised.

XR is not a movement tightly or opaquely controlled from the top. It’s “horizontal” structure and demand for “citizens” assemblies’ reflect an openness to participation and decision-making. Show up, get in there, spread the movement, sink roots in community organizations and trade unions, deepen the solidarity, make space for marginalized voices, change the system.