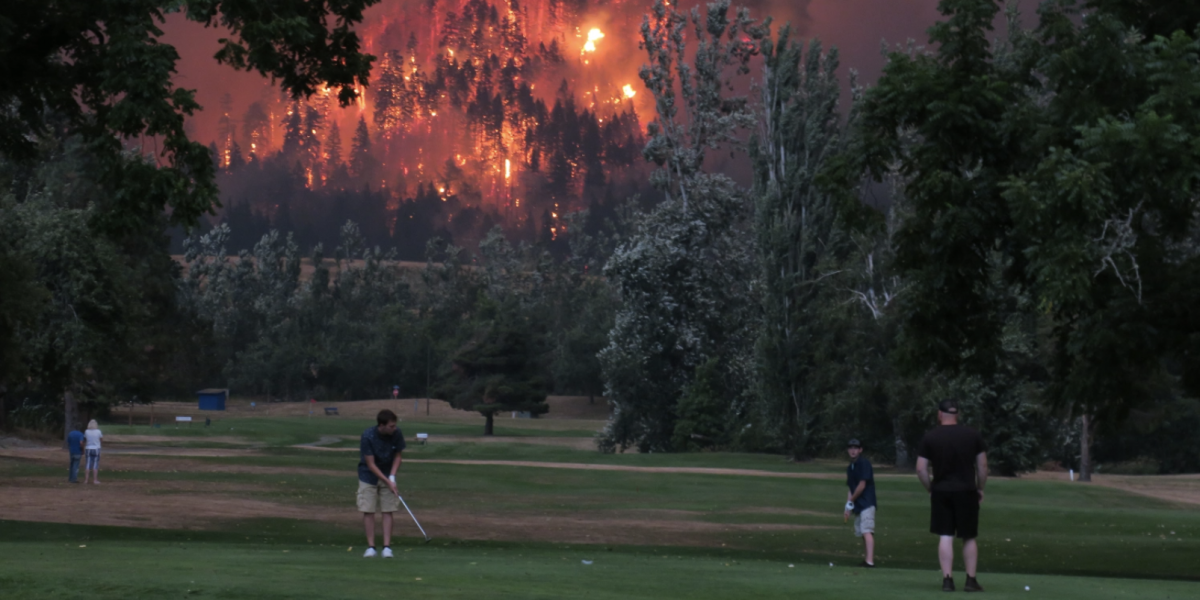 Regarding the battle against climate change, there is a common liberal argument that says we simply need an improvement in technology, or to push market investments to companies already producing this kind of tech. We’re seeing a boom in renewable energy investment, with many groups clamoring to add these companies to their portfolios. But this push towards new technologies doesn’t exist in an economic vacuum. They are directly informed by the labour processes which create them. No matter how many wind farms or electric cars we create, capitalism will necessarily find a way to destroy us.

Because capitalism is in a constant state of over-production, there is a drive to replace old goods with new ones. If we were happy with the amount and quality of products we fill our lives with, and if we could replace them among our own means, consumer capitalism wouldn’t be able to exist. I think this is pretty self evident and we can easily relate. We are constantly bombarded with ads for new products: phones with better cameras, computers with faster processors, cars with stronger engines, etc. Capitalism can’t function in a world with clean, ‘green,’ energy. It can’t function in a world where the working class are given the tools to function and thrive. Simply put, you can’t fix what’s meant to be broken.

Companies are no longer competing in markets to fill a specific niche or introduce a new product. Everyone already ‘has’ a phone, a car, a TV. Companies are now competing against each other to replace these products. As such, they need to produce a product with a limited shelf life in order to justify a new model. I’m sure this is an experience we’re all well aware of. Be it a software update for your smartphone or computer, or even firmware for your self-heating mug, our device simply stops working properly and we are encouraged to ‘buy up’ to a new model. Often even a simple part for a home repair is not sold at a typical hardware store. Again, this is by design. Companies will more often than not produce an under-performing product in order to sell an ‘upgraded’ model, or restrict access to tools and documentation. If we were all given access to the tools, parts, and knowledge needed to repair our everyday items, we would certainly hold off on next year’s model.

And corporations are doing what they can to make sure this doesn’t happen. While the Right to Repair (RtR) movement has been gaining traction for decades, companies like Apple and Tesla are doing what they can to make sure that, in order to repair a product, both repairers and consumers are forced to stay within their commercial eco-system. One of the most notable targets of the RtR movement is Apple. The company only provides Original Equipment Manufacturer (OEM) parts and diagnostic tools to Apple-authorized service providers. Apple has recently been forced to offer these resources to third-party repair options, but they have done so with limited access and have created so many loopholes that most third-party retailers don’t bother. For example, Apple requires retailers to go through a per-product certification system. When Apple adds more and more SKUs, this makes it even more costly for 3rd-parties to repair Apple products. Apple has also been found guilty of, and continues to, use iOS updates to limit processing speeds on older phones and put less stress on older batteries, instead of offering a battery recycle program or re-write code to be unit specific. While they have previously claimed innocence by saying they were just trying to put less processing-stress on older models, these downloads are forced on the user and can only be undone once the update has been installed and has shutdown the phone at least once.

For all of the supposedly environmental takes around electric cars that there are, Tesla has been perhaps one of the worse in regards to workers’ rights and access. Not only has the company tried its best to keep access to tools and parts in their own hands, but they continue to keep diagnostic tools and backend support hidden for their car’s software and electronics. For almost a decade, Tesla drivers have fought for the right to access the details of their car’s workings. Much like Apple, Tesla works around these laws by making it overly difficult or cost-prohibitive for third-parties to undertake repair. After a right to repair law passed in 2021, Tesla would have been forced to make service manuals and diagnostic information available to repair stores. Instead, they created online portals available only through ‘Tesla certified shops.’ Anyone not in this category has to pay a fee: $100 for a 24-hour period, or $3,000 for a year.

Electrified transportation in general could have amazing impacts on the way we move people and goods around, from the small-scale city public transit to cross-country goods and services. Earlier this year, the federal Liberals promised to invest $14.9 billion in new public transit funding over eight years. Of this, the $2.75 billion investment in zero-emission buses announced will be allocated over the next 5 years starting in 2021. This move would not only put less vehicles on the road that burn fossil fuels, but add more well-paying jobs to Canada’s growing electric vehicle sector. Of also great importance is the fact that lithium ion batteries can be recovered and recycled. While greenhouse gas capture and re-use is still not a viable option, we already have the technology to recycle these batteries.

There’s a lot of good that comes from recycling lithium ion batteries. They contain raw materials like lithium, cobalt, manganese, and nickel. For every kilogram of raw material recycled from them, a kilogram doesn’t need to be extracted through environmentally and socially destructive practices like mining. Countries like Argentina and Chile obtain the lithium needed for the battery’s cathode using copious amounts of water in some of the driest and hardest hit climatic areas on Earth. Moreover, recycling these materials keeps them out of landfills, which would have given them the chance to seep into and contaminant soil and groundwater. However, as of 2019, fewer than 5% of lithium ion batteries have been recycled. That’s partly because recycling these batteries is not cost competitive with raw materials. In all the ways extracting lithium and mining cobalt is costly, it’s generally cheaper than recycling in terms of dollars and cents, as there aren’t yet any established standards of recycling and re-selling materials.

There is no solution to the climate crisis that will come from anti-worker billionaires like Elon Musk or Bill Gates, who are part of the problem. The great imperial rivals of the last century knew that raw materials were limited, and rather than cooperation, competition is what was preferred. This is still very much the edict of capitalism today: profit before people.

For capitalism, any moral impetus to a greener future is gone. Capitalism is only concerned with the private ownership of, and the profiting from, the means of production. It does not prioritize social good or the environment for the fundamental reason that caring for this position is contrary to the motive for a constant cycle of production and wealth accumulation. When companies like TC Energy start to push towards more renewables, they’re working on the basis of finding the highest rate of investment. In fact, these same companies have deep pockets and continually try to push the federal government to lower regulations for oil and gas development. Wind farm or tar sands, these companies will always put profit before people and the planet.

But this doesn’t mean that these technologies are a wash. In fact, these speak to our ability to meet the challenges we collectively face as a planet. Expanded and electrified public transportation not only speaks to those fighting against climate change, but creates the links with anti-poverty, abolition, and workers’ rights. A fleet of public vehicles with no financial barriers can only create a society that focuses more on equity and mobility within a city.

Moreover, both the Covid and climate crisis have made it clear that government and corporations have only their own interests in mind. The working class has been forced to literally struggle for survival while companies rake in billions. Canadian Union of Postal Workers (CUPW)’s Delivering Community Power campaign shows what changes workers can make to run society for the better, from expanding the social role that postal workers can play for those isolated for various reasons, to creating a network of digital and electric-charging hubs across the country for free access.

The fossil-fuel sector is soon to be the thing of dinosaurs (pun very much intended), but that doesn’t mean this new economic shift signals a shift in social or environmental relations. Our government and corporations can claim whatever greenwashing tactic they want, but in 2020 alone, the Liberals gave $18 billion in subsidies to the oil and gas industry. It’s not the impact on climate that’s important, but counting on corporate interest and development. Again, this only shows that capitalism can only lead to global failure. We can take care of ourselves, capitalism will not. We can fix the world, capitalism cannot.