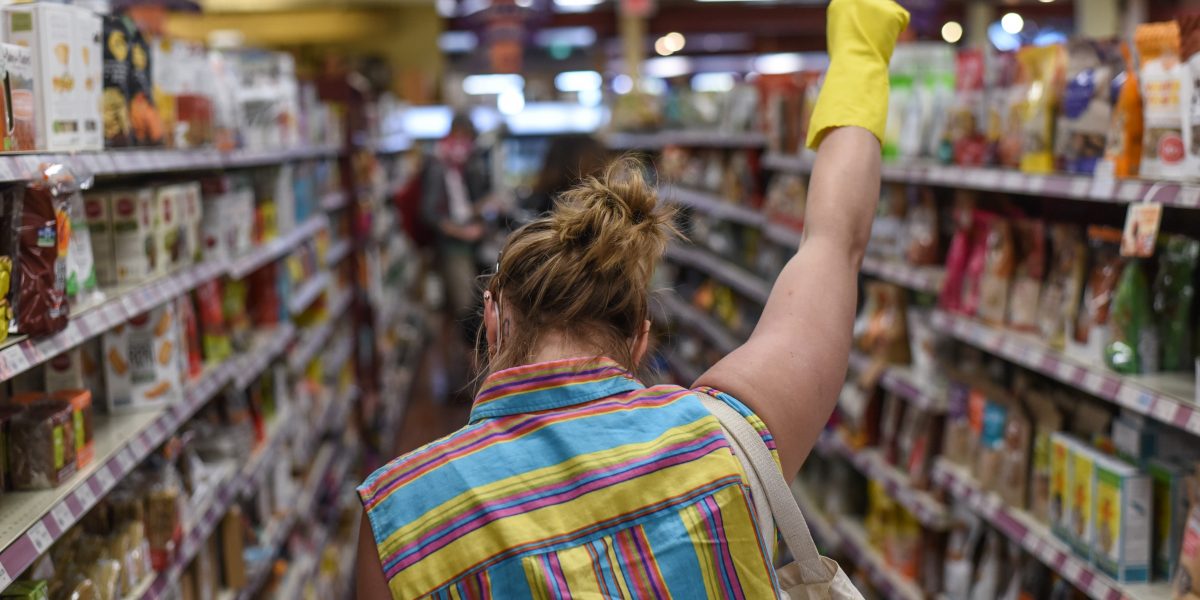 Low-wage workers have been hit hardest by the pandemic, they were the first to lose their jobs and most likely to get COVID. A new survey shows that workers in the most precarious jobs, who are disproportionately racialized, are directly dealing with the impacts of the worsening climate crisis. Spring Magazine spoke with Jen Kostuchuk of Worker Solidarity Network about the links between climate justice and workers’ rights.

I’m a settler from Treaty 1 territory, currently working on Lekwungen territory. My experience as a worker in the hospitality industry motivated me to engage with and advocate alongside workers in food service. I’m currently filling the Worker Solidarity Network’s (WSN) climate and labour project coordinator position. WSN is a community-centered organization that fights for worker justice. Through organizing, mutual aid, and legal advocacy, our goal is to support workers through labour injustices and build worker power.

Given the dual pandemics of Covid-19 and climate change, how have workers been affected?

Between being overworked and understaffed, lay-offs, and termination, workers have been affected in ways that lead to deep vulnerability. But disproportionately, COVID-19 and climate change have hurt essential, low-wage workers in highly gendered and racialized sectors. Many workers in industries like hospitality, retail, and food service, bear the brunt of stolen wages, normalized discrimination, sexual harassment, and harsh working conditions like cooks standing in front of hot grills during heatwaves.

At the height of the pandemic, I heard from folks whose employers told them to ignore COVID protocols if a customer “wanted it a certain way.” I also heard from food and beverage servers who were asked to remove their masks before customers entered a tip. So in some cases, it’s clear that workers were risking their own health and safety to avoid jeopardizing their income.

The pandemic fostered an environment where we saw first hand that low-wage workers were deemed essential yet not treated that way. At the same time, we know that the pandemic provided an opportunity to build momentum to expose our most broken systems through mobilizing together for racial, gender, and environmental justice.

And this goes directly into your role at WSN as well as the climate labour survey. What can you tell us about that?

So we launched a climate and labour survey on World Earth Day back in April. We wanted to hear from workers who have been directly affected by the impacts of climate change at work. We gathered some powerful stories from 36 workers so I’ll share a few of those findings.

It was reported that during extreme weather events, 90% of workers do not receive additional breaks on shift when they need them. It was also reported that most workers rely on public transit to commute to the job. This tells us that accessible and affordable transit is necessary, especially during heatwaves where temperatures last year reached nearly 50 degrees Celsius in some areas of so-called BC. The majority of workers from the survey also disclosed that they experience mental health challenges at work which are exacerbated during natural disasters.  It’s clear that mental health support services must be accessible to all workers.

Folks from the survey also provided insight to some of the outcomes of climate change at work (from fainting on shift due to heatstroke to working in two inches of water for a week due to flooding). So those are some of the findings from our initial survey and the next step is to host a focus group where we will virtually engage workers to share their experiences and demands for climate and worker justice.

Where do you see the roots of these problems coming from? Workers have been oppressed for years, and it seems that governments and industry are only making things worse forcing workers into more and more dangerous positions

That’s true and I think the root of this problem is capitalism. The commodification of labour has created, sustained, and normalized harsh working conditions and violence. And, in climate circles, when we talk about things like a just transition, we need to consider what that looks like for vulnerable workers. Do these folks have safe jobs to transition to with liveable wages and fair working conditions? At WSN, we believe that if we transform precarious sectors like food service into better and fairer spaces for workers, these have the potential to be desirable sites for workers to transition to. The voices of precarious workers need to be included in dialogue about climate justice. They cannot be ignored.

And so these are the problems, where can we find the solutions?

In community! When working together, we can uphold the voices of the working class and fight the systems that treat workers as disposable. Workers deserve liveable wages, protected income, and more than 5 paid sick days a year. Through collective action and mutual aid, we can imagine a better world and work toward a just future for all.

Are there any examples of organizing and building together that stick with you?

Specific to climate and labour organizing, I think strategizing effective ways to reach and engage community is key – whether that be through postering in downtown cores, sharing climate-specific infographics on social media, or through outreach, connecting directly with workers is necessary. For example, our climate and labour project is worker-led meaning we are centering the voices of workers themselves and not pre-defining what their concerns and demands might be. We are hearing from workers in positions where they might otherwise feel afraid of retaliation for speaking up. So we are amplifying those stories to build worker power.

What changes and differences have you noticed in organizing since 2019 to today?

The pandemic certainly influenced a lot of organizing efforts. Feet to the street organizing became difficult amid the COVID-19 crisis but I noticed an increase in virtual organizing and digital calls for mutual aid. While in-person solidarity is so powerful, I have noticed in various circles that there seems to be a sustained effort and dedication to virtual ongoing collective action. So that is one of the biggest differences I’ve noticed in organizing between 2019 and today.

How can people find out more about WSN and get involved?

Please check out our website and consider joining our membership at https://workersolidarity.ca/join/ Here, you can find information about upcoming actions, events, and workshops. On the last Wednesday of every month we host a virtual organizing call on Zoom, a space to hear from folks advocating for worker justice in many different capacities!