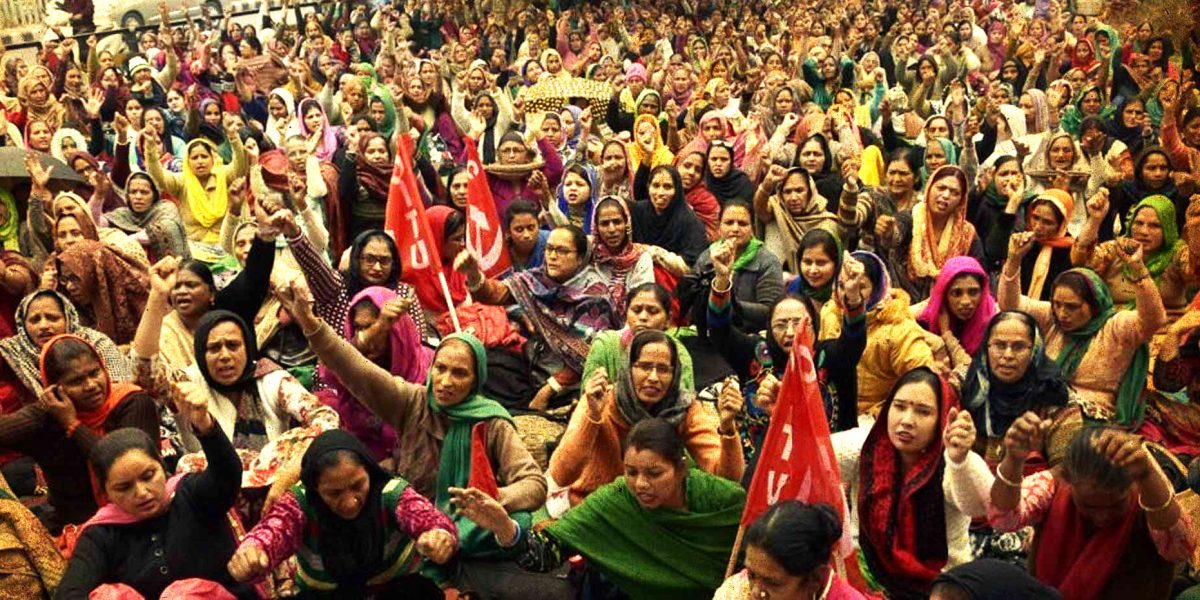 The Manifesto of the Communist Party, was published more than 170 years ago. But it has enduring relevance for anyone who wants to understand the world, and change it.

As Marx and Engels explain, “the theoretical conclusions of the communists are in no way based on any ideas or principles that have been invented or discovered by this or that would be reformer.” In other words, they are not utopians fixated on dreaming up solutions to society’s problems; the conclusions which they came to were the result of analyzing a whole series of historical experiences and material conditions at play. Given the predictive nature of much of this book, the fact that so many of the things they predicted came true is a testament to usefulness of a materialist analysis—which can help strengthen movements against austerity, climate change, and oppression.

Our relationship to producing the means of subsistence began all the same: highly individual, each producing the means of subsistence for ourselves at an individual level. We went out, we forged our own food, found the water we needed to drink, etc, etc. At a certain point we begin to cultivate it in groups, such as in an extended family. Then to groups of families, then producing as a village, then to countries, until finally we have our current position which is to say that means of subsistence, and commodities generally, are produced globally. We have shoes from China, T-shirt’s from Indonesia, we’re eating a Jamaican patty while talking on our smartphones which all contain little pieces of metal mined in The Congo.

In this movement from stratified means of producing commodities consolidating over time into the grand global system that we have now, our relationships to production (social class) have also been consolidating over time. From a system where there were no social classes through phases where we had long lists of many different classes, (as Marx called it, “a complicated arrangement of various orders, a manifold graduation of social rank”…), we now have the incorporation or consolidation of all those classes into two great hostile classes: the bourgeoisie and the proletariat. This is often short handed to workers and capitalists, but I think the most accurate way to describe these two relationships would be as owners, and non-owners of the means of producing commodities. So you own the factory or you work there; you own the tech startup, or you are employed there.

“Modern bourgeois society with its relations of production, of exchange, and of property, a society that has conjured up such gigantic means of production and of exchange is like the sorcerer who is no longer able to control the powers of the nether world whom he has called up by his spells.”

There is both far greater means of production now than in Marx’s time, and yet we’re living through economic and ecologic crises. Marx and Engels point out that capitalism goes through periodic crises, and they emphasize the absurdity of the fact that these are crises of over-production: there are too many commodities for the population at large to actually purchase, often because of low wages.

Think of the absurdity of the fact that we as a society produce so much clothing that we can’t even use it all. Then, when the clothing doesn’t sell we destroy it wholesale instead of donating it, so as to not flood the market and disturb the balance between supply and demand in order to fetch a higher price.

Capitalism is ever growing. This is the same growth that fuelled colonialism and imperialism with its ever growing need for more natural resources, and new markets (ie people) to exploit. Or the constant production of new use values, like bigger TVs, or more  phone apps, or even things as benign as a toothbrush or razor which are somehow constantly being “revolutionized”. But at its core this is due to the necessity in capitalist production to always get back more capital than you initially put in. Breaking even in a capitalist business is actually a loss, so zero percent growth in a capitalism economy is actually a full-blown economic crisis.

It’s easy to take the moralistic approach to climate change, and simply say that capitalism puts profits ahead of environmental preservation. But we can go further by showing that this isn’t just a series of bad decisions made by individual members of the ruling class, but it’s actually built into the how the system itself functions as part of this ever expanding need for growth in the form of natural resources.

There is a decidedly anti-nationalist streak running throughout the course of the book. When you read that “workers have no nation,” or that “the intellectual creations of individual nations become common property,” or that “we (communists) bring forward the common interests of the entire proletariat independently of all nationality”, when you read these lines almost unceasingly, you can tell that it’s a very important part of their philosophy. It’s literally the conclusion of the book: “workers of all countries, unite.”

Their approach to internationalism and anti-oppression is not based on minor reforms but massive transformative change: “they (communists) openly declare that their ends can only be attained by the forcible overthrow of all existing social conditions,” referring to women’s oppression and the family. When we think about social conditions in the contemporary context, we’re thinking about race, sexuality, gender, in short, all of the oppressive structures that we refer to as “social constructs”. For Marx and Engels, all of these things are what they would describe as relations of production, which means the social relationships which we must enter into in order to survive, and ensure the continued existence of capitalism as a mode of production. Race as a concept was created and reinforced for the purpose of property accumulation, and later capital accumulation. The dominance of heterosexuality plays a role in reproducing a labour force. The social construct of womanhood has facilitated property and capital accumulation, through unpaid domestic labour in the family unit based on monogamy.

So having said all this, it should be no surprise that Marx and Engels see communism as only being attained via “the forcible overthrow of all existing social conditions”, because they see all of these social conditions or constructs as a totality. A totality which has its roots in facilitating the existence of private property in general, and in our time, the time of capitalism, a totality which is reinforced in its facilitation of the accumulation of capital. They are not talking about tinkering with the system here or there, but instead the forcible overthrow of these social conditions.

Marx and Engels describe how the material conditions that created capitalism were conditions that arose under feudalism. Certain forces that developed within feudalism proved to be incompatible with the older forces that gave birth to the new forces in the first place, eventually to the point that the social superstructure of feudalism could no longer contain those new growing forces. At which point open revolution broke out and feudalism along with its social superstructure of monarchy was overthrown.

Two questions arise from this. One is, what are the forces developing under capitalism which indicate a development greater than capitalism itself, and two, what is the social superstructure which will not be able to contain those forces and be “burst asunder” as they put it. There are many expressions that contradict the existence of private property, some old and some new—from food banks, to co-op housing, to worker co-op business. These could be seeds of socialism because within that seed is the potential for a flower. But it has to break its caccoon before it can grow and blossom into something wonderful. To the second question, our social superstructure is liberal democracy, monogamy, binary gender, socially constructed race, etc, which supports a system of private property based on class exploitation. This is the social superstructure must be torn asunder in favour of something which is in every way the opposite of that.

The Communist Manifesto is not the last word of socialist theory, but in many ways the first. In almost every paragraph in the book, from beginning to end, is an allusion to some area of work which they or others elaborated on more fully later.

The manifesto mentions the labour theory of value, which is that commodities have value as a result of the labour embodied within them. Marx elaborates on this more fully in his book Capital, in which he describes value, the commodity, money, role of machinery, capital accumulation, circulation etc.

The manifesto mentions the need for capitalism to expand to ever further markets, which we today describe as colonialism and/or imperialism. This area was later elaborated on extensively by Lenin, especially in his book Imperialism the Highest Stage of Capitalism where he describes the subjugation of poor countries by richer countries. This area was also elaborated on by Frantz Fanon, most famously in his book The Wretched of the Earth, one of the most scathing and eloquent criticisms of the effects of colonialism and racism ever written.

The manifesto mentions the role of trade unions, an area developed more fully by Rosa Luxembourg, especially her book Reform or Revolution which explains why trade unionism alone is not enough to bring about a revolution.

The manifesto mentions the family unit and monogamy—an area that Engels elaborated on in his book The Origin of the Family, Private Property and the State, where he applies a historical materialist framework to the origins of the family unit, monogamy, and women’s oppression. Engels also wrote Anti-during, elaborating more on historical materialism and the dialectics found in science and nature.

Marx was the philosopher, the economist, the mathematician, the man of science, etc, and paired with great analysis, a materialist analysis, it’s the reason why the Communist Manifesto is still so relevant 170 years later. History informs economics, philosophy informs science, psychology informs politics, and all of these things inform each other. The lines that we draw around particular disciplines are arbitrary, and anyone who wants to practice Marxism in the contemporary context needs to recognize this.

When we ask ourselves, “what does it mean to practice Marxism today,” it’s taking a materialist lens to this totality, which is exactly what Marx and Engels did in this book, and in all of their work. Dialectics is how we are able to connect various struggles for decent work with struggles for migrant rights, which are also struggles against nationalism, and women’s oppression, which is connected to struggles against transphobia, homophobia etc. Viewing things in their totality means that we can’t draw hard lines in the sand around specific disciplines. So when we talk about socialism for today, this means overturning the state and putting the means of production into the hands of the working class, and this can only happen by simultaneously overthrowing all existing social conditions in their totality.