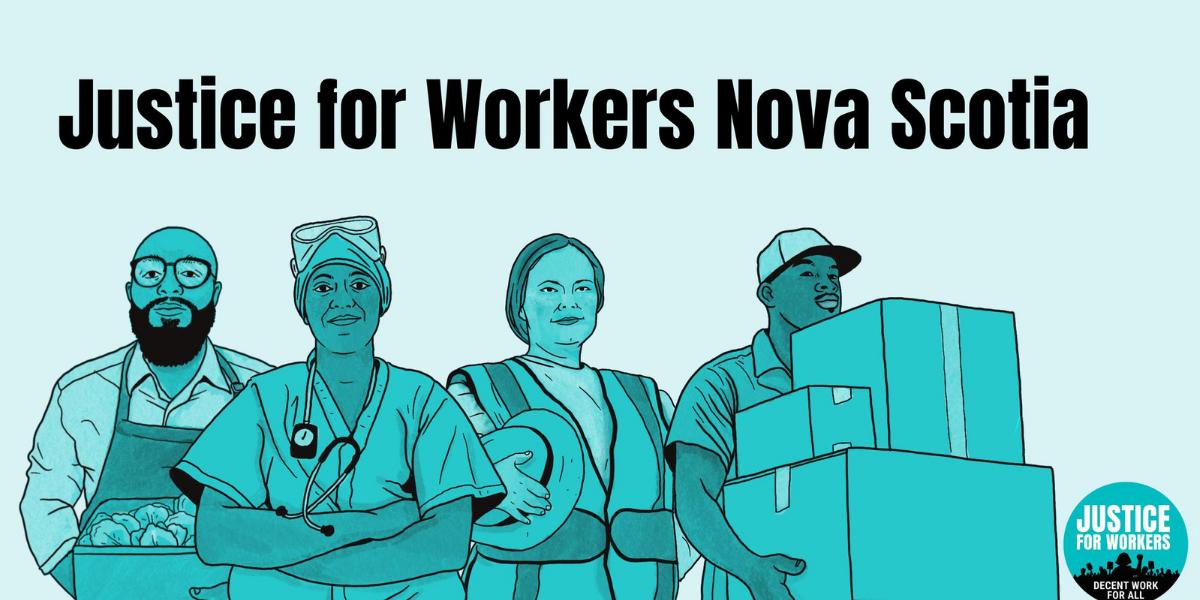 Two years into the pandemic – with all the risks of unsafe work conditions, lost pay, and job precarity continuing to fall disproportionately on low-income workers – the Fight for $15 and Fairness Nova Scotia officially relaunched as Justice for Workers Nova Scotia in late January 2022. The Justice for Workers NS spokesperson Suzanne MacNeil spoke with Amber Tucker of Spring Magazine about the campaign’s goals and the broader context of the fight for decent work.

SM: We’re really excited about this rebranding and relaunch of the campaign to reflect what we’re going to be demanding in 2022. This is a campaign that’s been going on for quite a few years, and in the course of this campaign, we spoke to literally thousands and thousands of workers in Halifax and across Nova Scotia. Our petition has been very central to the campaign. This isn’t a petition that’s online or digital, as so many are these days. We did this petition activity in person, and so each of those thousands of signatures reflects a conversation that we have had with real live human beings.

In the earlier years of this campaign we would hear things like, “I’m going to sign this. I support this”  and “the minimum wage needs to be higher, but $15? Wow, that’s a really big goal.” Some people would be like, “Oh, we’ll never get there.” But a couple of years ago, the conversation started to shift. People would say, “Well, I will sign this, but $15 really isn’t enough.” And so then we started some conversations among our committee, and each person who signed was invited to give us their contact info so we could talk to them later. So we initiated a process where we contacted people again, and we had hundreds of conversations on the phone with people to ask what they would like to see in the campaign.

Our demands for a $20 minimum wage, for ten permanent paid sick days, and for stronger labour standards in Nova Scotia were the result of this process. Now as we are dealing with the impacts of the pandmeic and rising inflation, people are finding that what could buy at the grocery store even just a few years ago is not what they can buy today. People in the province are also facing a housing crisis. We are really excited to put forward this new updated campaign.

Raising the demand to a $20 minimum wage may, to some people, sound like a really steep climb. How did the group land on $20 as the minimum wage level workers need in Nova Scotia?

As I mentioned before, it really did start with those conversations. Some of the final conversations were explicitly about what is the dollar amount that people feel comfortable with, compared to the Living Wage report? What makes sense to people, what is a good round number?

We also have a number of groups that we listen to and collaborate with, and one of those, of course, is the Canadian Center for Policy Alternatives, Nova Scotia Office. Several years ago, they started doing these reports on the living wage in Nova Scotia, and the latest report that they released in 2021 reflects the living wage levels across Nova Scotia. When you average those out they’re approximately $20.

Even though to some people $20 seems like a really steep climb from where we are now, that’s also what people feel like they need. More and more workers are having to stretch that paycheck, to work second and third jobs. In the context of a pandemic where there are major concerns about the capacity of a health care system or people not being able to show up to work because they get sick, and when you have people who are working two or three jobs, you can see how that impacts multiple workplaces. If people are having to choose between staying home to not get their coworkers sick and not being able to put food on the table and not being able to pay rent, you can see how things like a decent minimum wage and sick days have a lot of profound health outcomes in the province.

One of the things about a $15 minimum wage is that we now actually on the federal level have a federal $15 minimum wage. And a couple of years ago, Ontario raised their minimum wage by $2, to $14, and now they have $15 as of January 2022. New Brunswick is going to be raising their minimum wage by $2, to $13.75. So this is the way things are going. The trend is for workers to be saying, “What we’re making now isn’t enough”—not just minimum wage workers, but anyone making wages that are keeping them poverty. It’s really important that as we go through this economic and public health crisis that workers not be the ones to shoulder the burden of the economic impact. We need to be able to feed ourselves and pay our rent, and business is going to have to adjust to that.

Especially when we look at the profits that were made by industries like long-term care and by the grocery business, and many other places where workers are paid so little, $20 is very reasonable.

Absolutely. For how much hardship people have experienced during this pandemic, there are a number of corporate actors that have gotten much, much wealthier off of this.

The Nova Scotia COVID-19 Paid Sick Leave Program was announced by the government in December. This offers some very limited and short-term protections for workers who have to self-isolate due to COVID-19. How does a program like that compare with Justice for Workers’ demand for 10 permanent paid sick days for all workers?

We think it is very important and telling that the government has felt the need to implement this program. It is a sign that something much more substantial and permanent needs to be put in place. We also think that this needs to be calculated into the costs of doing business. If you want to hire people and have them spend their working lives making your business succeed, making your company succeed, there are certain minimum things that you need to accept as reality. You need to pay them a certain amount. There is a certain amount of vacation days that are covered in the labor standards. And sick days absolutely have to be part of that equation.

First of all, there needs to be a decent number of sick days when we’re getting instructions to isolate for so many days. There was the pressure to shorten the isolation period, but I think everyone basically agrees that you need to isolate for two weeks until the virus has run its course. So that translates into five business days for each week, because if people don’t have that, they are going to come to work sick. That is going to impact their coworkers and it is going to snowball from there—we are seeing the impacts of that in real time. I have to think that that’s going to have an impact on business, of course, in addition to the obvious public health effects. Two years into a pandemic, permanent paid sick days have to be a no-brainer at this point.

Across Canada, migrant workers are a sector of the workforce that is often made invisible, with extremely reduced ability to access basic protections, and Nova Scotia is no different in that respect. How does Justice for Workers Nova Scotia centre the voices and rights of migrant workers?

When we were discussing our new demands, we wanted to follow the lead from groups such as the Migrant Workers Alliance for Change. One of their takeaways was that a lot of the protections that we advocate for and that workers come to enjoy in Canada, are not accessible to migrant workers. There isn’t equity as far as access to things like Employment Insurance. In our campaign we want to emphasize that all workers deserve the same benefits and rights under the law, regardless of their citizenship status.

With this updated set of goals and demands, what kinds of projects and efforts are you excited for in the year ahead?

I’m really excited to be part of building a worker-centred campaign for higher wages and better working conditions for all workers across the province. During the pandemic we have not been able to do as many in-person events as we were able to previously, but we do expect that we’ll be able to return to petitioning once the Omicron wave subsides. We will continue to do phone zaps and are looking looking for ways to get back out in the community and keep talking to workers and keep encouraging folks to communicate these demands with their elected representatives.

We want people to get their coworkers, neighbours, friends, family and unions involved. We would love to see this organizing being done across the province. A lot of our previous activity was based in Halifax, but we would love to see other communities across the province included. Being from Cape Breton, I’m always happy to get out of the city and to broaden things out.

For anyone who might like to join Justice for Workers or just learn more about what’s going on, how could they find out more and start getting involved?

Like and follow our Facebook page! Getting in touch with social media is a great thing to do right now, and we’ll get you hooked up with our organizing committee. And if you have ideas for actions in your community and you’d like a bit of support, definitely contact us.

The next organizing meeting for Justice for Workers Nova Scotia is February 23, 8pm AST