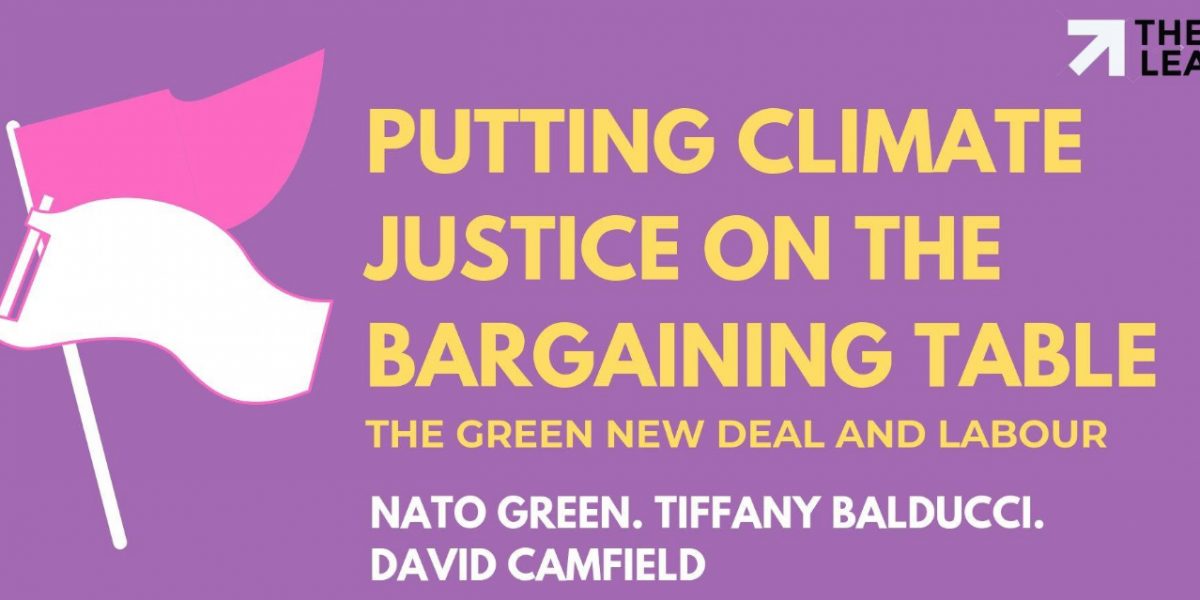 On September 13, The Leap organized a podcast entitled “Putting climate justice on the bargaining table: the Green New Deal and Labour.”  The topic obviously struck a chord, with over 800 people signing up for the event. It featured three labour activists who agreed that bargaining represents an under-utilized opportunity to fight for climate justice, while recognizing that a Green New Deal (GND) would also require a political fight that involves the entire working class. There was also agreement that opposing racism and white supremacy inside and outside of the workplace are key fights for workers.

Leap organizer James Hutt explained the reason for organizing the podcast: “I have been working at this intersection of climate and labour as it’s the way forward to build climate justice: build the labour movement and get at the climate crisis by bargaining and action. In North America, our biggest social changes came via the labour movement, but in the last half-century its scope and action have decreased. But there are interesting developments elsewhere, e.g. dock workers in Italy refusing to ship arms to Saudi Arabia, and US teachers’ wins that also included stopping random searches, more green spaces. I don’t see that much happening in Canada aside from CUPW (Canadian Union of Postal Workers). There are few unions looking at changing society, just looking to slow concessions, with some exceptions like the TTC (Toronto Transit) electrical workers and CUPE (Canadian Union of Public Employees) Local 2, calling for mass trikes for free transit in Toronto and taking down the Ford government, and Unifor in Oshawa looking to re-tool the GM plant for socially beneficial manufacturing.”

Nato Green is an organizer with SEIU local 1021, in San Francisco, and described the role of racialized workers: “As workers see momentum growing (around climate justice) they will be more likely to be brought along, because they see political reality shaping up. Workers of colour and low wage workers will be the ones to take more initiative. Next up is for unions to step up to connect climate crisis to our members with racial justice. The core political constituency of the right wing is white supremacy. Whiteness is cooking the planet because those groups support fossil fuels. We can do this in our work; lots of people are thinking hard, thousands of youth identify as socialists.”

Tiffany Balducci is President of Durham Region Labour Council and 4th Vice-President of the CUPE, and spoke about how her union is addressing climate justice: “CUPE has an action plan to address white supremacy, both internal and external to the workplace. We recognize the intersection between climate and the union movement, so we offer participatory workshops on anti-racism to expose environmental racism and other forms of racism. We see the GND as just transitions for workers and justice for indigenous communities.”

David Camfield is professor of labour studies and member of the Winnipeg Labour Council and described how unions can address Indigenous solidarity: “Indigenous sovereignty has to be respected. Just look at the four principles of the Red Deal (see therednation.org) and how they’ve been endorsed by the DSA… for indigenous grassroots campaigns unionists need to be there e.g. MMIW, pipelines, the struggles can vary. Then we need to report back to our co-workers for solidarity and to build relationships. We should use the same principle in other struggles e.g. migrant justice. This will set up debates and we can’t shy away from these.”

Tiffancy Balducci talked about two initiatives she’s part of: “Unifor and the labour council want to re-tool the Oshawa GM facility to produce electric postal vehicles, hydro vehicles, buses, ambulances, vehicles needed in mining and agriculture, and elsewhere. We have a petition and are canvassing. Our next phase is an independent feasibility study to be released in September. And CUPE Ontario has endorsed the Pact for a GND. We have workers in health, education, social service, airlines and more.”

Nato Green discussed the importance of ongoing dialogue: “There is growing support for GND, so we’re in a moment when the momentum is growing… It is important for unions to engage with others not just ad hoc but at ongoing labour/community tables e.g. Jobs with Justice San Francisco is a space where everyone comes together (rather than a whole bunch of other coalitions). It also allows trust to build up.”

David Camfield described how unions can link up with the broader climate justice movement: “Just transitions are needed from fossil fuels and agribusiness but fossil sector workers and the rest of the working class mustn’t be left behind. The rich must bear the cost since the crisis is their fault, and indigenous sovereignty must be respected. Unions need to raise climate concerns in bargaining, but we also need to compel governments to act since the bargaining table alone won’t work. The climate movement has the potential to be bigger; we need to encourage unions to engage with climate strikers and invite strikers to our events and meetings. Unions will better respond if the outside movement gets stronger and we take that energy inside our unions.”

All the speakers spoke to the importance of just transitions, indigenous sovereignty, and the necessity of linking with grassroots campaigns (for housing, education, indigenous rights) in order to bring relevance to climate justice discussions with workers. Initiatives in the US are further ahead than Canada, with the growth of the Democratic Socialists of America, the Sunrise Movement, and the tabling of a GND resolution in Congress, which acts as an important focal point heading into elections.

It was encouraging to see the extent of supporting the links between the environment and racial justice, in light of growing attacks on people of colour and migrant rights. It would have been useful to have included specific reference to the ground-breaking work of the Migrant Rights Network (see migrantrights.ca) with respect to pledges against politicians’ use of racism to divide workers, and their materials and workshops on how to talk about racism.

While some labour organizations are arguing for more unions to begin bargaining around climate issues, it will take considerable confidence-building before union members not only bargain but are willing to strike to win on these issues.  The more that environmental groups understand and support workers’ struggles of all kinds, the more likely we will see workers engage in climate justice struggles.

That means supporting grass-roots movements for free transit, tenant rights, and decent work, as well as current struggles by teachers in both BC and Ontario for improved working conditions, including class sizes. To support fossil sector workers, we should demand implementation of the recommendations recently made for just transitions by Canadian miners. And we should demand a union-led consultation with fossil sector workers about specific measures needed to ensure a shut-down of that industry that leaves workers and their communities with dignity and financial security.

Just transition is often only thought of in terms of ensuring good, alternative jobs for fossil sector workers. But it also means that those millions of low carbon jobs that are currently underpaid, precarious and largely held by women and racialized groups, should be properly valued, respected and compensated. Whether or not they are unionized, they can also fight for justice in campaigns that affect their workplace (e.g. Fight for $15 and Fairness) or in others that affect the rest of their lives, e.g. against racism, for affordable housing, affordable transportation, public health care, education, and so on.

There is no way capitalism can deliver a Green New Deal or a Red Deal, so all our actions need to create the confidence to not only grow grass-roots campaigns like those mentioned above, but to take on the capitalist class once and for all. Workers must play the leading role in the fight against the oppression and exploitation inherent in capitalism. Through their role in producing goods and services, workers have the power to stop production and profits and, from there, to take over production to meet the needs of people, not the bosses. Only a society that creates and distributes goods and services to meet peoples’ needs, not corporate profits, can free us from capitalist exploitation of our labour and our planet.