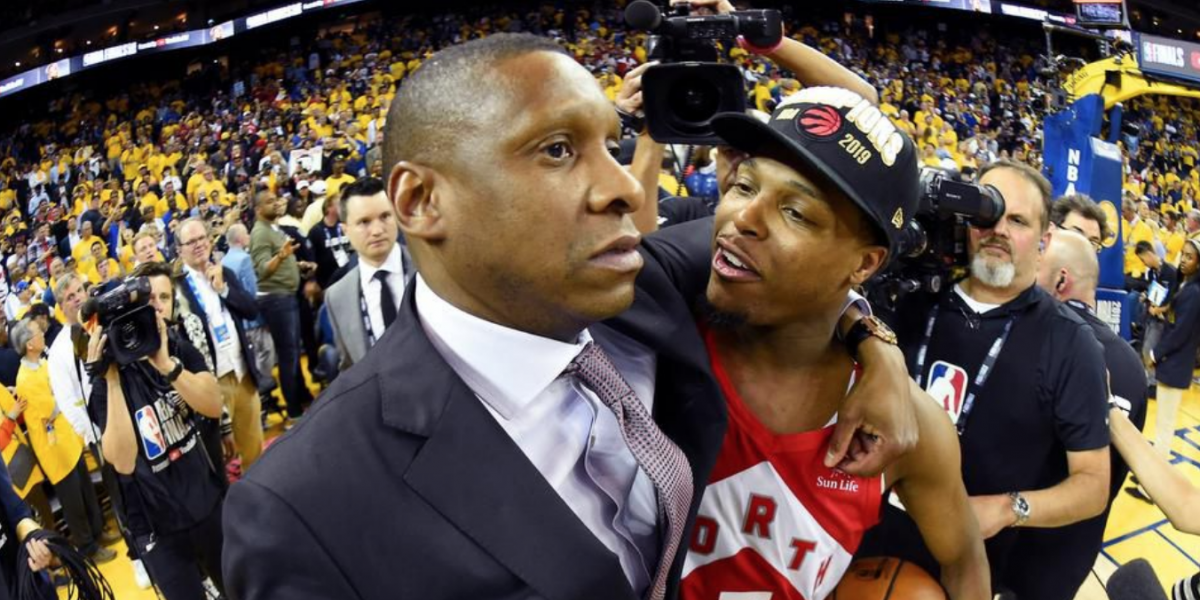 Amid the euphoria of the Toronto Raptors’ NBA Championship victory in Oakland last week, fans on both sides of the border are reacting with anger at the racial profiling and harassment of team president, Masai Ujiri.

Moments after the Raptors won Game 6 over the Golden State Warriors, a sheriff’s deputy for the Alameda County police aggressively blocked Ujiri from joining the players, while his entourage streamed onto the court.

Ujiri, who is Black, was the only person singled out—and stopped and threatened—by the police.

NBA security intervened and separated the deputy from Ujiri, who was visibly rattled by the experience. In a video of the incident, the deputy is seen lurching towards Ujiri, while security desperately tried to de-escalate the situation as more police arrived on the scene. In this video, taken from behind Ujiri, the deputy is seen angrily shouting and pointing at the Raptors president.

Ujiri eventually gained access to the court when Raptors guard Kyle Lowry reached out to him, grabbed his hand, and literally pulled him from the crowd that had begun to surround him. Lowry’s intervention, and Ujiri’s emotional reaction, may be seen in this video.

The sense of outrage has been compounded by racist coverage in the mainstream media which, until recently, has almost universally reported the incident from the perspective of the Sheriff’s Office, blaming Ujiri for the incident and depicting the deputy as a helpless victim. Most articles have presumed Ujiri’s guilt and give credit to the deputy for showing restraint.

Sgt. Ray Kelly, a spokesperson for the Sheriff’s Office, told the New York Times: “Instead of creating a more significant incident at this international post-game event, we decided to take the high road and cease and desist.”

Perhaps most damning was a statement by Greg Wiener, a season ticket holder and long-time fan of the Golden State Warriors, who witnessed the incident court-side:

“We were standing right next to the cop when this happened. First of all cop was a hard-ass, Ujiri was pulling out his NBA Pass, the cop did not see badge he put his hands on Ujiri to stop him from going forward. The cop pushed Ujiri, then Ujiri pushed back. Cop was wrong.”

Wiener’s statement produced a shift in some of the coverage, including this piece, which has begun to question the deputy’s version of events. Police continue to claim that Ujiri didn’t have his credentials pass, but this video footage shows Ujiri carrying it just seconds before he entered the arena.

Despite the growing backlash, the Sheriff’s Office is pushing hard for Ujiri to be charged with battery. The Alameda Country District Attorney, Nancy E. O’Malley, will weigh the possibility of charges this week.

By contrast, when Mark Stevens, the former co-owner of the Golden State Warriors, pushed and swore at Raptors guard Kyle Lowry during Game 3 in Oakland, there was never any discussion by the Sheriff’s Office about laying charges—even though Stevens, who is white, publicly admitted his misdeeds in an apology.

Stevens was ejected from the match, banned from attending NBA games for a year, and fined $500,000, but the media and police response couldn’t be more different from their reaction to Ujiri. The contrast shines a light on the racist double-standards that Black people face in the criminal justice system and the ways that white supremacist attitudes affect media coverage: Black people are automatically considered guilty, while white people always get the benefit of the doubt.

In Ujiri’s case, his own testimony wasn’t enough to balance the media coverage; that only happened when a white witness made a statement on Twitter. In Steven’s case, his misdeeds were characterized as “a lapse in judgment.” Would the media have been as forgiving if Stevens were Black?

Despite Ujiri’s role in the Raptors’ win, and the well deserved accolades he has received from fans throughout the NBA, the fact remains that he faces criminal charges in the United States because of racial profiling and harassment by police.

The growing sense of outrage is justified and will not subside soon, even if the District Attorney declines to lay charges. But basketball fans and anti-racists alike must find a way to direct their outrage at the Sheriff’s Office and District Attorney. Ujiri deserves a public apology and full exoneration.

Ujiri’s powerful position as Raptors president couldn’t protect him from this racist incident. If the Oakland police get away with it and lay charges against him, it will only reward their misconduct and fuel their sense of impunity—leading to more racial profiling of all Black people.

Some commentators have observed the strong anti-racist attitudes among Raptors fans (see here and here), but others have also rightly named the systemic racism that exists in the City of Toronto and across Canada, where Black people face the same racial profiling and harassment as in the United States (see here and here). Fans have a chance to push back on this kind of racism, no matter where it happens, by condemning the racial profiling of Ujiri and of all racialized communities.