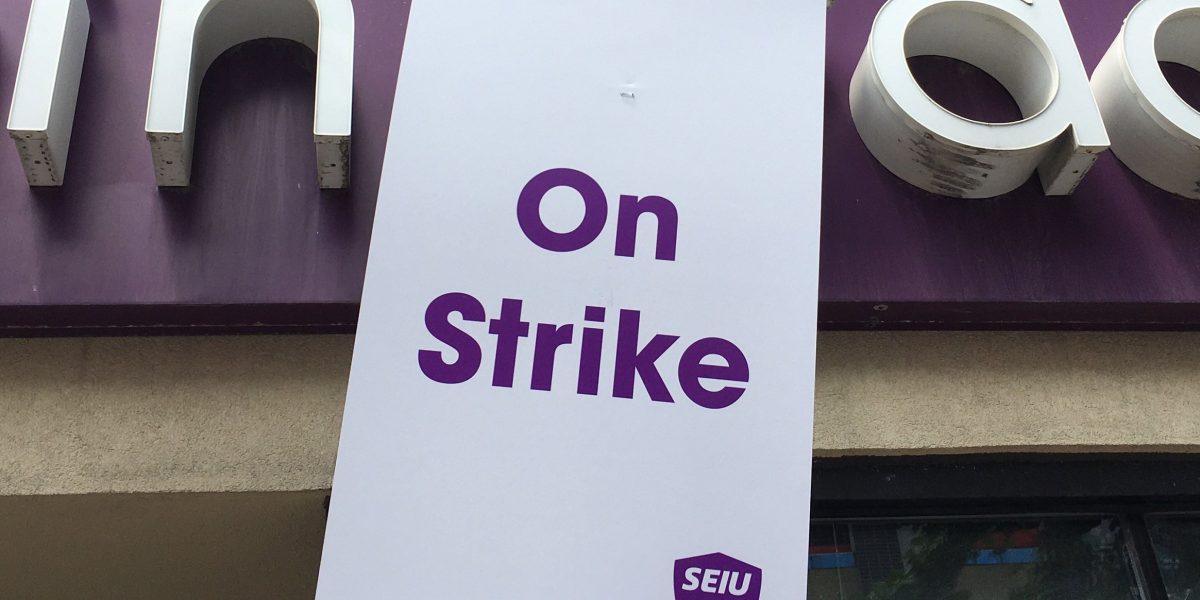 On June 7, workers at Wine Rack stores in Toronto went on strike after months of trying to negotiate a fair deal with their employer. Fighting for a number of pressing issues — including fairer scheduling, higher wages, and respect for union rights — workers voted 86% in favour of striking.

Tensions had been bubbling for some time before the strike. They came to light publicly back in February when the company refused to let SEIU put up union-related posters on bulletin boards — ones which read “Demand Living Wage Now” and “Improve Scheduling Rights.” This led to a high-profile arbitration hearing on May 3. While the company lost its arbitration, it has continued to attack union rights.

In addition to the other issues, workers at Wine Rack have put extra emphasis on the need for a fair scheduling process that respects seniority and the union. “Time is completely arbitrarily divided and schedules vary widely from week to week,” said Francesco Lo Presti, an employee of the Toronto region. “We want a little fairness. It’s difficult to coordinate month-end bills with this kind of precarious work because of fluctuating income.”

In an attempt to avert a strike, the company tried wooing workers into accepting a substandard collective agreement with a $100 grocery gift card. “The company claims ‘we would like to offer another $100 [grocery] gift card for all employees’ but that they can’t until the union accepts the new Collective Bargaining Agreement,” posted Wine Hack Worker, a Twitter account run by one of the strikers. “But the workers at Wine Rack cannot be bought with a $100 grocery gift card,” the thread continues. “We see this email from our employer for what it is: a transparent attempt to prevent us from using our collective bargaining power. We will not back down. #WineRackStrike”.

The low wages and unreliable schedules has led to an annual turnover rate for employees of 50%. The poor working conditions, low-wages and intransigent management is truly surprising in light of who owns the company. While Wine Rack is part of Arterra Wines Canada, the ultimate owner is the Ontario Teachers’ Pension Plan (OTPP) through various holdings.

The workers’ union, Service Employees International Union (SEIU) Local 2, has asked the four major teachers’ unions that are part of the pension plan to demand that OTPP do the right thing by resolving the strike with a fair deal for workers. “When you consider that the Ontario Teachers’ Pension Plan owns Wine Rack, the fact that we can’t use our own union bulletin boards without going through arbitration is extremely disappointing,” said Maxim Gontcharenko, a four-year employee. “I think teachers would find this quite surprising.”

Pressure has also come directly from teachers, organizing through Teachers for Justice (TFJ). Writing on the TFJ website, Mary Lynn Gallienne, a retired teacher, says, “Policies around our pension holdings need to be consistent with the social justice values we impart to our students. Workers rights to organize and bargain collectively for decent wages and working conditions must be supported.”

“Our profession should never be a party to an attack on worker’s rights. We can invest successfully and responsibly,” says Jason Cormier, another teacher. On June 9, the president of the OSSTF, Harvey Bischoff, issued a letter to the CEO of the OTPP stating that the OSSTF supports the striking workers and called the lack of intervention by the OTPP in addressing the issues raised by workers as “troubling.”

Ultimately, the teachers unions will need to pressure the OTPP to change its policies about how it engages in “responsible investing” so workers at companies it owns are treated fairly. Of course, that becomes a unique challenge when the fiduciary responsibility of pension funds is to increase the rate of return for their pensioners. As more people retire, the nature of pension fund investments are sure to be a site of contestation.

A return to “normal”, or justice for workers?

The strike comes at a time when economies, particularly in Ontario, are beginning to “reopen.” It thus forces an important question: what kind of economy are we building in the post-pandemic landscape? Will we see a return to “normal,” one which is characterized by precarity, low wages, and a lack of fairness? Or will we see workers chart a new course, one that recognizes the centrality of their labour and treats them accordingly?

As the solidarity from rank and file teachers shows, Wine Rack workers are not alone in this struggle. Their strike is particularly important for other workers trapped in retail jobs marked by low pay, inconsistent scheduling, and few protections. These same issues, across so many workplaces, are why the Justice for Workers campaign is organizing for decent work for all. Because the whole working class has an interest in as we fight to shape what comes next. A win for Wine Rack workers would help raise the tide for the sector as a whole, helping mount an alternative to retail’s precarious status quo.

To support Wine Rack workers, please follow their call to boycott of Wine Rack stores during the strike. Follow SEIU Local 2 for updates and to find out how and where you can support their picket lines in Toronto. Spring will be doing a picket line visit at on Friday June 11, at 6:30pm at77 Wellesley St East.