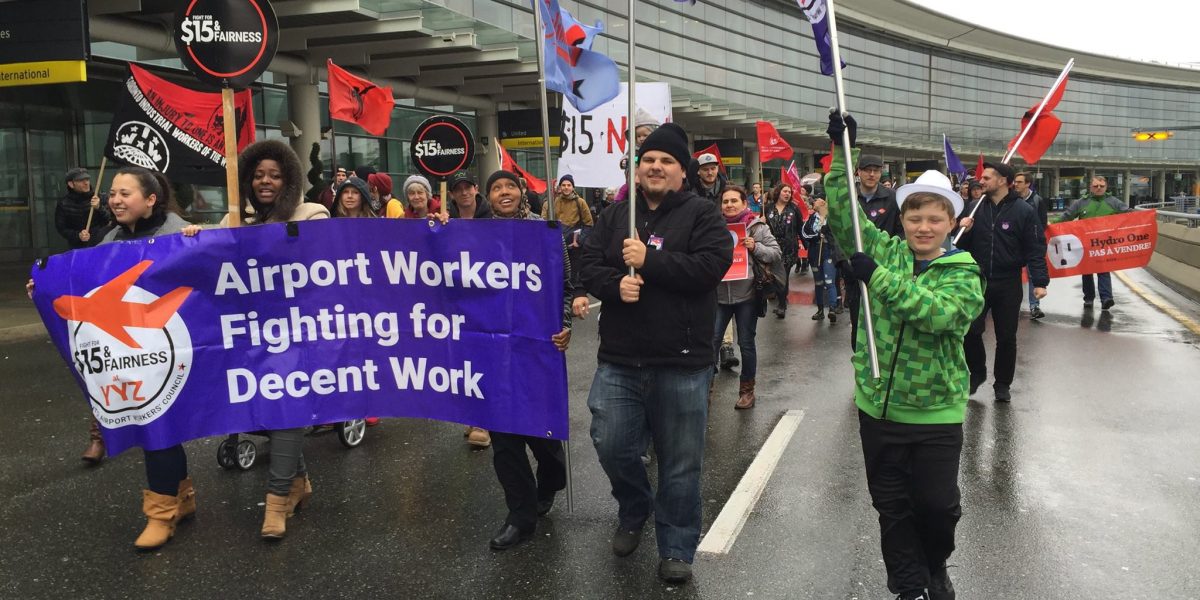 In the 2019 election campaign, Justin Trudeau’s Liberal Party ran on a promise to implement a $15 minimum wage for federally regulated workers in 2020. The Liberals have also passed through Parliament other important improvements to federal labour and employment legislation such as a provision requiring equal pay for part-time, contract, casual, and temporary help agency workers vis-à-vis full time workers. Many of these reforms have yet to be brought into force. It is time for the federal Liberals to act now to make a $15 minimum wage and other improvements to employment standards a reality.

Approximately 900,000 workers across Canada are employed in federal jurisdiction. This means that rather than being governed by provincial labour and employment legislation, their rights at work are set out in the Canada Labour Code and other parts of federal law. Federal jurisdiction includes employees of banks, air transportation companies, railways, telecoms, most federal Crown corporations, and certain other industries.

A powerful social movement across Canada, the United States, and elsewhere, has had a great deal of success at raising minimum wage rates in various jurisdictions in recent years. For example, in California, the Fight for $15 succeeded in 2016 in getting the state government to agree to hike the minimum wage from $10 an hour to $15 an hour by 2022. In Canada, Alberta (under the previous NDP government) implemented a $15 an hour minimum wage in 2018, while BC has promised a minimum wage of $15.20 an hour by 2021.

The hardest-fought battle in Canada to date occurred in Ontario. Against long odds, the Fight for $15 and Fairness succeeded in 2017 in pushing the Ontario Liberals not only to put Ontario on the path to a $15 minimum wage by 2019, but also to win other key reforms like paid sick days and a requirement for equal pay regardless of employment status. Unfortunately, the Progressive-Conservative (PCs) government led by Doug Ford reversed many of these victories. What remained, crucially, was the hike in the minimum wage to $14 an hour, though the PCs cancelled the further hike to $15 an hour.

In a climate where most provincial governments in Canada are openly hostile to workers, the opportunity for a win for workers in federal jurisdiction must be a key priority. A $15 an hour federal minimum wage will directly help raise wages for a substantial number of workers in federal jurisdiction, particularly in provinces with low minimum wages.

In addition, the federal government should move quickly to implement other promised changes, particularly equal pay for all workers regardless of employment status. Employer power in recent decades has been built on dividing workers into job categories—like full-time, part-time, casual, contract, and temporary—and treating them differently. Growing employment precarity is bad for all workers. Allowing lower wage rates for non-permanent and/or non-full time workers is not only unfair to workers in those job categories, it makes it more difficult for permanent, full-time workers to defend their own working conditions.

Levelling up all workers in a workplace to the highest standards is the right approach, and the equal pay provisions the federal government has passed but not implemented are a step in this direction. The proposed provision would also put the screws to temporary help agencies, which squeeze workers wages and benefits while taking a huge cut for themselves.

An important win has already occurred at the federal level with respect to paid sick days. The federal government has amended the Canada Labour Code to provide for three paid sick days annually for all workers with at least three months’ service with an employer. This modest but important improvement underlines the vindictiveness of the Ford government in Ontario, which removed the right to two paid sick days by arguing Ontario was the only jurisdiction with such a benefit.

It is true that most workers (who are provincially regulated) will not be directly affected by any Canada Labour Code changes. However, by setting a high bar, a $15 federal minimum wage and other breakthrough employment standards improvements can give a boost to ongoing fights in provinces like Manitoba, Quebec and Newfoundland and Labrador, where organized movements are pushing for provincial action.

Improving federal employment standards, including a $15 minimum wage, does not only set the bar for provinces—it would also give energy to workers’ fights internationally. In the US, candidate for the Democratic nomination Bernie Sanders is promising a federal $15 minimum wage. In the UK, meanwhile, McDonald’s workers recently went on strike for £15 an hour, which is equivalent to more than 25 Canadian dollars. A federal $15 an hour minimum wage in Canada would make international news, and demonstrate the momentum that is building against employers who have built business models on cheap labour.

The federal Liberals won re-election on a promise they would address the growing squeeze Canadian workers were facing from low wages and skyrocketing housing, health care, child care, and education costs. A $15 an hour federal minimum wage is far from a complete solution to these problems, but would be an important step in the right direction. The federal government must now move from talk to action and get it done.