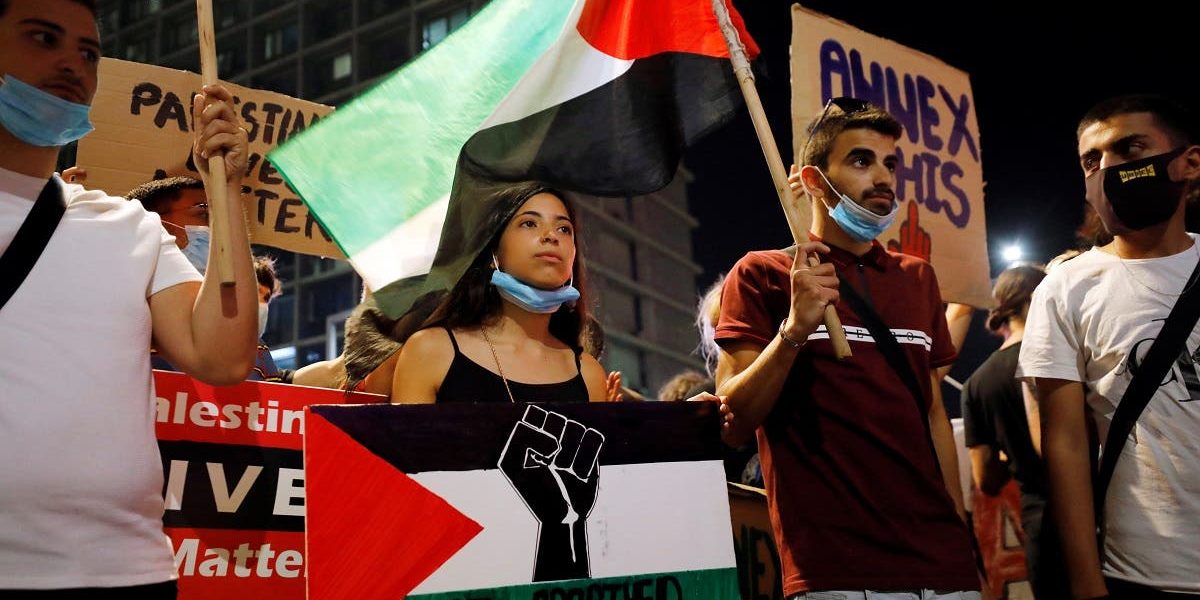 In July, Kairos Palestine issued A Cry for Hope message to Christians, churches and ecumenical institutions worldwide. This was an appeal to “governments and world bodies to employ political, diplomatic and economic means to stop Israel’s violations of human rights and international law.”

As the call explains, “We have arrived at a critical point in the struggle to end the oppression of the Palestinian people. The State of Israel’s adoption of the Nation State Law in 2018 legalized institutional discrimination in Israel and the Palestinian territories, officially depriving Palestinians of their rights to life, livelihood, and a future in their homeland… Fuelled by U.S. support and emboldened by the ineffectual response of the international community, Israel’s newly-formed coalition government has cleared the way for outright annexation of around one third of the occupied West Bank, including the Jordan Valley. These developments make it all the more clear that we have come to the end of the illusion that Israel and the world powers intend to honor and defend the rights of the Palestinian people to dignity, self-determination, and the fundamental human rights guaranteed under international law, including the right of return for Palestinian refugees. It is time for the international community, in light of these events, to recognize Israel as an apartheid state in terms of international law.”

The “cry” from Palestine affirms “Palestinians’ right to resist the occupation, dispossession, and abrogation of their fundamental rights,” including supports the Palestinian call for Boycott Divestment and Sanctions (BDS); calls for study of misuse of the Bible and to offer theologies of inclusion; opposes anti-Semitism and opposes equating criticism of Israel with anti-Semitism; and supports “initiatives between Israelis and Palestinians and interfaith partnerships that combat apartheid and occupation and create opportunities to work together for a common future of mutual respect and dignity.”

While Christians have lived for the last two millennia in Palestine, today there only remains about 46,000 Palestinian Christians in the West Bank including East Jerusalem, and about 1,100 in Gaza. The population of Bethlehem, the place named in the gospel of Luke as the birthplace of Jesus, was 85 percent Christian in 1947, and today is less than 12 percent. “Annexation could be the final straw when it comes to a viable Christian presence in Palestine.” This was the  appeal made by Clergy from four of Palestine’s major denominations in a  Open Letter earlier in the summer.  “For Palestine, Bethlehem and particularly its Christian population… annexation will be particularly catastrophic.”

Christian organizations in Palestine were part of the 2005 civil society boycott, divestment and sanctions call, and have reached out for support over the last fifteen years including explicitly to the international Christian community. In June 2017, the 50-year mark of military occupation, The National Coalition of Christian Organizations in Palestine (NCCOP) said “We need brave women and men who are willing to stand in the forefront. This is no time for shallow diplomacy Christians.”

In was in this regard that the NCCOP said to the World Council of Churches and Christians around the world:

“We ask that you speak in support of economic measures that pressure Israel to stop the occupation and go further to support sport, cultural and academic measures against Israel until it complies with international law and UN resolutions urging the ending of its occupation, Apartheid and discriminations, and accepts refugees to return to their home land and properties. This is our last peaceful resort. In response to Israel’s war on BDS, we ask that you intensify that measures.”

The recent Cry for Hope is a follow up to this 2017 statement, and the earlier 2009 Kairos Palestine statement. As it states, “it is incumbent upon us as followers of Jesus to take decisive action. The very being of the church, the integrity of the Christian faith, and the credibility of the Gospel is at stake. We declare that support for the oppression of the Palestinian people, whether passive or active, through silence, word or deed, is a sin. We assert that Christian support for Zionism as a theology and an ideology that legitimize the right of one people to deny the human rights of another is incompatible with the Christian faith and a grave misuse of the Bible… We cannot serve God while remaining silent about the oppression of the Palestinians.”

On July 21, there were two signatures showing on the Cry for Hope as endorsements from Canada.

One was Elizabeth May, former Green Party of Canada leader and member for Saanich-Gulf Islands. Ms. May speaks of her Christian faith as a practicing Anglican and her theological training, so perhaps support of Christians in Palestine would seem natural. The Green Party of Canada approved the principles of the 2005 Palestinian BDS civil society call in February 2017, without calling it BDS, doing so with support from 90 percent of its membership. However, Ms. May has said that she does not support BDS. It seems Ms. May might have realized after the fact, that indeed the Kairos Palestine “Cry for Hope” includes support of BDS, as her name no longer appears on the endorsements.

The other early signatory, Rev. Dr. Chris Ferguson, General Secretary of the World Communion of Reformed Churches (WCRC) remains. Rev. Dr. Ferguson, is now joined by the United Network for Justice and Peace in Palestine and Israel, and Rachel Warden on behalf of Kairos Canada and several of its partners, with all providing comments that they care about Palestinians, but fall short of supporting the actions named. Ms. Warden’s says “In our humility, we acknowledge that we do not have agreement within our churches and organizations to fully endorse (or take on for ourselves) all of the non-violent strategies for resistance and advocacy that you have proposed. We do, however, support your right to engage in non-violent resistance and will support those strategies that we can.”

It seems that Ms. Warden speaking on behalf of “church leaders of a number of our members including United Church of Canada, Anglican Church of Canada and the Evangelical Lutheran Church in Canada,” indicates there is no support in Canadian Christian leadership to stand in solidarity for the rights afforded to the Palestinian people under the Fourth Geneva Convention, and there is no support for BDS.

This of course should not come as too much of a surprise as most churches and Christian organizations are silent on Palestine. At General Council in 2003, a resolution was passed indicating that the United Church of Canada’s had recognized Israel as a Jewish state. Until 2012, the United Church of Canada supported right of return as it afforded the people of Palestine in United Nations General Council Resolution 194. However, at General Council in 2012, as the controversy swirled about a tepid settlement boycott on a few selected products, the same resolution approved that right of return was accepted only if it did not impact the demographic integrity of Israel as a Jewish state.

Even the policy of the United Church of Canada, the denomination that has come under the most fire for its support of Palestine, is counter to the 2017 Palestine Christian call for support of BDS. The United Church of Canada policy of Palestine includes that Israel is a Jewish state, that the word apartheid is unhelpful and should not be used, and that the BDS movement is “too broad a spectrum of participants with significantly varied and sometimes unacceptable goals.”

Calls from Christians in Palestine in 2009, and then in 2017, have still not been answered by any Christian denominations in Canada, nor by Kairos Canada. Based on the response to the July Cry For Hope it seems unlikely that the United Church of Canada, Kairos Canada, or other churches nor Ms. May, are about to offer more than their concern for the struggling people of Palestine.

It was not always the case.

In 1970, Rev. Dr. A.C. Forrest, the then editor of the United Church of Canada flagship publication, The Observer, had no concerns naming apartheid, in his book The Unholy Land. Forrest said “but the Israelis make the South African whites look like babes in the wood when it comes to practising apartheid and keeping another race in its place and misleading the world about it.”

In 1973, the Canadian Council of Churches was ready to act on the United Church of Canada 1972 General Council resolutions that called on Ottawa to speak out regarding the sale of Israeli bonds, to re-consider its $100 million loan to Israel from the Canadian Export Development Corporation, and among other things, it challenged Canada’s voting record at the United Nations.

Today in the USA, Rev Dr J. Herbert Nelson, the stated clerk of the General Assembly of the Presbyterian Church said in its endorsement to the Kairos Palestine Cry for Hope  “it is long past the time for action. We must join hands in non-violent resistance—heeding the call of Palestinian civil society for Boycott, Divestment and Sanctions.”

Palestinians should not have to wait any longer to hear these words coming from Canada’s Christian communities. Anything less is a betrayal of the people of Palestine, and certainly not showing integrity to the Christian call from Palestine to the international community