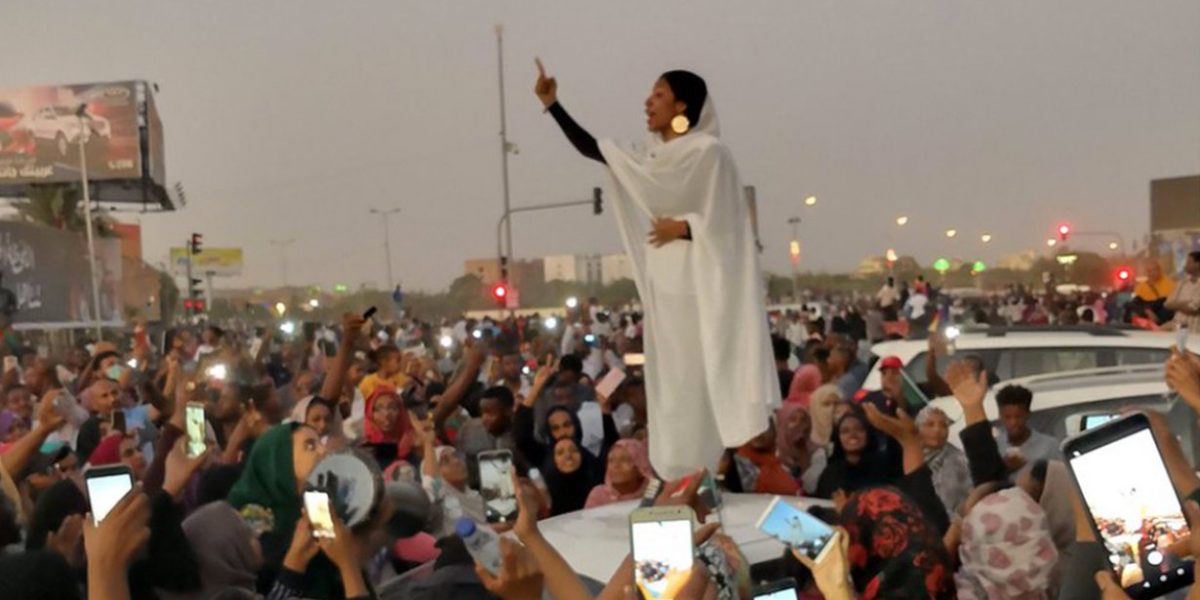 This is part two of our coverage of the current economic and political environment in Sudan. Spring Magazine interviewed Muzan Alneel, a Khartoum-based engineer, Marxist political activist and blogger. Part one describes the economic situation and the ruling class response, and in part two Muzan discusses the resistance.

These articles will be helpful in preparing for the Saturday December 12 reading group, “Revolution Time”

Could there be a new political party, one that represents the hopes of the Sudanese when they overthrew Bashir in 2019?

Most resistance committees (RCs) don’t support the creation of a new party, because political parties have a bad name because they always sell out, are wrong and/or just use people.  That’s been people’s experience.

What is the status of Local Resistance Committees (RCs)?

The first protest called by RCs without the Forces of Freedom and Change (FFC) was October 21, 2019 (anniversary of the 1964 October revolution in Sudan) and the slogan was “supporting the government and correcting the path of revolution.” Since then we see the government not taking the policy stands we expected. But the RCs fear protest would lead to a takedown of the government and then RCs would have to face the military on their own. So RCs always say, “we are not trying to take down the government, but just  put it on the right path.”

This “balance” will be hard because the needed energy to maintain this position is decreasing over time. There is less zeal, just fear of the military, not support for the FFC. RCs would be happy to see an alternative.

And the government has used this duality or ambiguity from the beginning. RCs have used marches to the PM’s office, and to other areas of the capital that have significance, but they haven’t been able to form their own narrative yet. The RCs are created geographically so they are less able to have a single clear political set of interests to represent. They came together for the revolution in 2018 and 2019, but the situation got more sophisticated than they were able to deal with.

On the other side there are arguments (from the FFC members of government) that we need technocrats who “aren’t political”. This narrative also slowed the political evolution of RCs. We have a bad history with political parties, which makes the RCs wary of developing political stances.

But things are now changing. The RCs have been doing political education and economics education workshops. They are getting informed, to get ready to face the government.

The RCs have done a lot of work on the ground e.g. during lockdown and bread and fuel shortages, they organized people to make sure everyone got their quota of bread, something a functioning government should have done. They also took part in the September economic conference and are a big reason why the government can’t say “people support withdrawal of subsidies.” The conference couldn’t make the final decisions the government wanted because of the RCs’ resistance for removal of subsidies. So it’s a good start but not sufficient, as they lack a political compass. They are spending a lot of energy not in the right place.

Having said that, there are some good stories of unions and RCs working together. We have seen mini-sit-ins around the country by the Union of Cleaning Workers/garbage collectors. In one Khartoum suburb, groups worked together to do one action of resistance over union demands for a raise in pay, PPE, and extra pandemic pay for the workers. At the same time the RCs demanded a new municipal law where RCs will be represented on local government bodies. This was the first time we saw workers and RCs coming together.

We expect to see more of this as RCs go back to their neighbourhoods to build their support at that level, instead of a big centralized resistance activities. There will be a focus on education and local depth to get more support from people. They lost support at the beginning of 2020 when they had marches and barricades but not a lot of popular support because of the disruption, and people called them “kids who have nothing better to do.” So the RCs knew they had to strengthen their relationship with the community.

Any comment on the Communist Party’s (CP) recent withdrawal from the FFC?

The reaction has been interesting because the CP has threatened to withdraw before, and as I said earlier, the party is seen as “one leg in, one leg out” of the government. People are indifferent to them now, saying “unless you tell us what happened on the inside of government we won’t listen to you on the outside.” People want to know how we ended up with this government, but the CP, as usual, says “lets’ move on and we’re the good guys.” The CP has tried to sell the concept of gradual revolution and they lost everyone with this concept because it makes no sense to make an alliance with the enemy and then fight the enemy. It’s a classic Stalinist party.

What has been the role of women in the resistance?

I will mention here the example of the Cooperative Women Union, a union of women working in the “unorganized” sector (e.g. tea and food sellers). The union itself is  a very positive addition to the unionized labor of Sudan, and to the Sudanese women specifically. During the lockdown period this union worked with the government to provide financial and material support to 12,000 working women who were left with no income due to the lockdown.

The work of the Cooperative Women Union during the lockdown was essential to minimizing the economic impact on the families of unorganized working women. Their experience was also essential in exposing elitist approaches towards the sector and lack of commitment towards the well-being of the people most affected by the pandemic and related economic hardships.

What is the role of trade unions?

It was our main parallel (para-government, public sector) unions that created the Sudanese Professionals Association (SPA) but they are now lost as part of the divisions in the FFC. The SPA has had its fallouts and divisions. The new leadership is taking positive steps but they have – in comparison to last year- lost most of their base and public support due to their shortcomings, broken promises and lack of transparency during the creation of the government and its first months.

But there are Resistance Committees of workers within government institutions e.g. within Treasury/ Ministry of Finance, who were the first people who spoke against the economic policies of government. Some of these workers reached out to the FFC in 2019 and asked for support against their Minister who was pushing for the removal of subsidies. We see this too in other ministries. Basically the people who took part in the revolution expected the new government to make good policies and were surprised by what actually happened. So they created resistance committees inside the work places within the government ministries.

Like everyone, though, they are exhausted by all this and by new things always hitting us. For example, now we have been surprised by the news of  a Russian military base on the Red Sea region of Sudan! Every time people work on the economy or new laws, something crazy happens and takes over peoples’ discussion and energy e.g. the same happened with the news of the normalization of the Israeli occupation. The older unions were never formalized even after the revolution, so they are more like groups of people with similar interests, there are no union dues. But when something hits them, like higher fuel prices, then bus drivers will put out a statement, but there is no real formal union behind that.

What needs to happen for the revolution to be completed?

Local resistance committees need to be clearer about their goals. We have learned in Sudan. We can see where things went wrong during the days between April 11-30, 2019, post-Bashir when the FFC went into partnership with the military council. But we have learned that this mistake is one that started earlier, in the early 1990s. We learned that a very wide coalition with theoretically conflicted interests, foreshadowing the FFC –  under the leadership  of capitalists, old money and the Sudanese CP, giving them credibility – means the protesters were willing to compromise. So what we’ve learned from 30 years ago is that we must be doing the hard work of creating leadership that comes from the most affected communities. Instead we took the easy route of the old political parties who don’t revolt against the old system, just give it a new name.

It will take a long way to build our resistance bodies and leadership. This revolution has failed already and the right thing to do is to understand that. We should not put more energy into compromising with this government. Instead we need to pressure this government like we pressured Bashir, to save lives. We’re getting to a place to move beyond the FFC and create our own leadership so when the time comes, the alternative leadership is ready, not just a mass of government bureaucrats.

What makes it hard to do that, harder than before, is that before the revolution, there was agreement that the situation was bad and we could discuss how to improve it. But we have lost that and people believe now that “Sudan is fine because we have well educated technocrats.” We need to remind people that the goal was never to just remove Bashir but to remove his policies, and we need to still do that.

We need to clarify our political stance and move away from just being “no to government” but “yes to something.”, i.e. the way is to strike not only so government listens but we should strike so we can show our economic power (and then government will listen).

One of the positive experiences is that of the Demand-based groups coming together in a coalition, the Association of Demand-based Bodies. The new Association includes various organs such as ones that represent refugees, internally displaced people, representing those who are fighting land grabs in both cities and from the military in outer regions, representing bodies resisting the building of big dams and the related forced migration of communities, among others. These people know there is a main thing being done to all of us but we can all use different tactics. This kind of coalition has a bit more analysis, so it’s not just ethnic or geographic. It examines the relationship with government and where we stand on economic interests.  They have a better analysis of economic and political issues lying behind government decisions, for example, how we deal with our wealth. If we had more of this before we wouldn’t have fallen for the myth of “technocratic impartial government.” So we need to be putting up guards against the old regime/technocrats, the poor analyses of periphery vs. Khartoum or national vs. international. And these are good first steps.

Join the December 12 discussion Revolution Time, a discussion of the fight for freedom and justice by the Sudanese people, with presentations and group discussions in English and Arabic, with translations. Panelists: Muzan Alneel (Sudan), young revolutionary in Khartoum; Elham Abdelkhalig (Canada), co-founder of Kandaka International for Women’s Right; Wassim Wagdy (UK) , Egyptian revolutionary