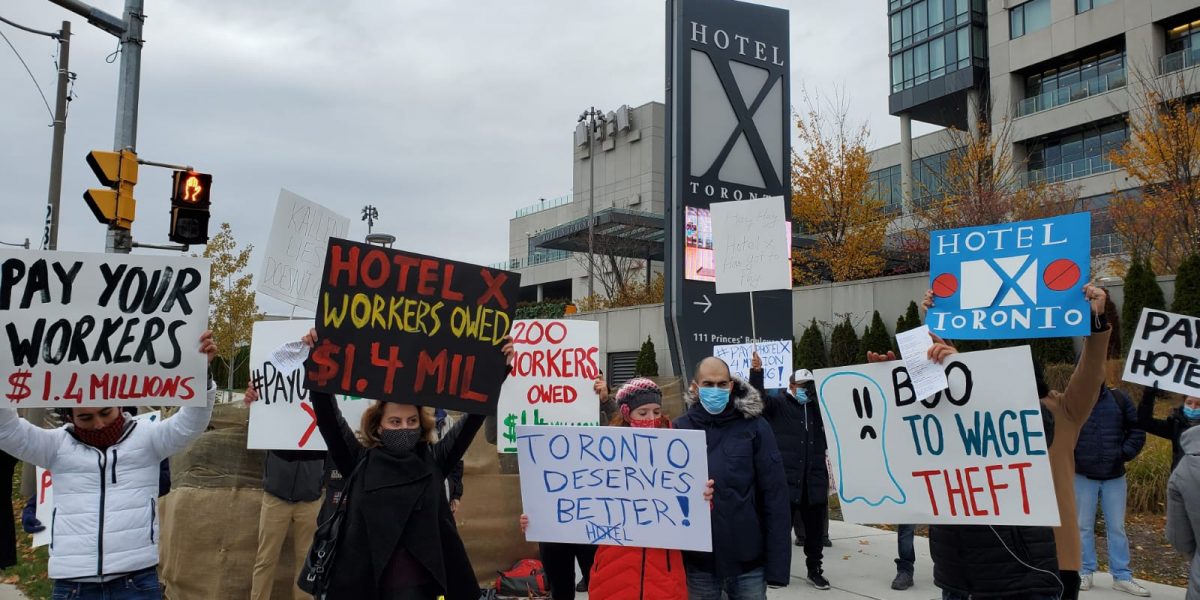 The icy winds blowing off Lake Ontario didn’t deter the crowd of over 100 protesters gathering outside Hotel X demanding justice for the hotel’s workers on October 30.

The crowd was made up of terminated Hotel X employees and concerned community members and supporters. The determination of the group served as a strong reminder that despite facing tremendous adversity, it is worker and community action that can face down the interests of employers and the rich. The fact that the workers were there in the first place was yet another stark sign, of how, all over the world, the COVID-19 pandemic has exposed long existing fault lines, especially the brutal reality of exploitative labour and extractivist economies that prioritize profits over people.

Toronto-based Hotel X owner Henry Kallan terminated, via subcontractors, more than 200 Hotel X employees during the peak of the pandemic in March 2020. Hotel X and Kallan have yet to pay overdue wages or termination pay, totalling more than $1.4 million. Moreover, he did not allow employees to interview or re-apply for their own positions when the luxury hotel re-opened after the initial phases of the lockdown. This has left hundreds of workers in the lurch amidst an unprecedented economic crisis.

As former workers Christine and Lauren point out, they and other workers toiled long hours and busy shifts in the flashy and opulent hotel – working in everything from the hotel bar, to cleaning services, to restaurants – only to be dismissed and ignored by hotel management.

Christine said that the demonstration was to “hold corporations and big companies accountable in the way that they treat staff. We need to get what we are rightfully owed. All of these people worked hard to get this hotel to where it is. Amidst a global pandemic, we found ourselves wrongfully terminated. People are owed their wages … the money that we worked hard to get, we deserve.”

Standing up to corporate bullies

“We gathered here today because the Hotel X owes over 1.4 million dollars to the 200 plus people they put out of work permanently during a pandemic. The fact that they did not offer our jobs back or the opportunity to interview our jobs is just criminally wrong,” said Lauren, a former Hotel X employee. “I cannot willfully support any corporation that treats its employees like this, who also relies on them to service the guests to continue the business that they have.”

Hotel X sits prominently on the publicly owned exhibition grounds. Owner Kallan has plans to scale up his business by building 400 more rooms, for which he has applied for a City of Toronto permit. Will he be allowed to expand and leave the workers high and dry? The city should be pressured to make Hotel X accountable for its poor labour record or its promises of supporting frontline workers and support staff will sound increasingly hollow.

Regardless of what the city does, the workers are not going to back off or retreat until they get back what they are owed. If Hotel X thinks it can out wait the workers they may be in for a rough ride. “Henry Callan was not responsive (to our demands) and didn’t want to acknowledge that he had any issues with this,” Said Chris, a former Hotel X employee. “So we need to come out here and show him what we need to have happen.”

If Callan is allowed to proceed without paying his employees their dues, this will be one more example of privatizing profits and dumping losses on the public. So much for the `people’s premier who looks out for the little guy.’

Show your support for Hotel X workers and sign the petition: https://15andfairness.org/payuphotelx. You can also call Hotel X Toronto by Library Hotel Collection General Manager Fariyal Hasham at 647-475-9269 to express your disappointment! Also tag @HotelXToronto on social media and use the #PayUpHotelX hashtag.