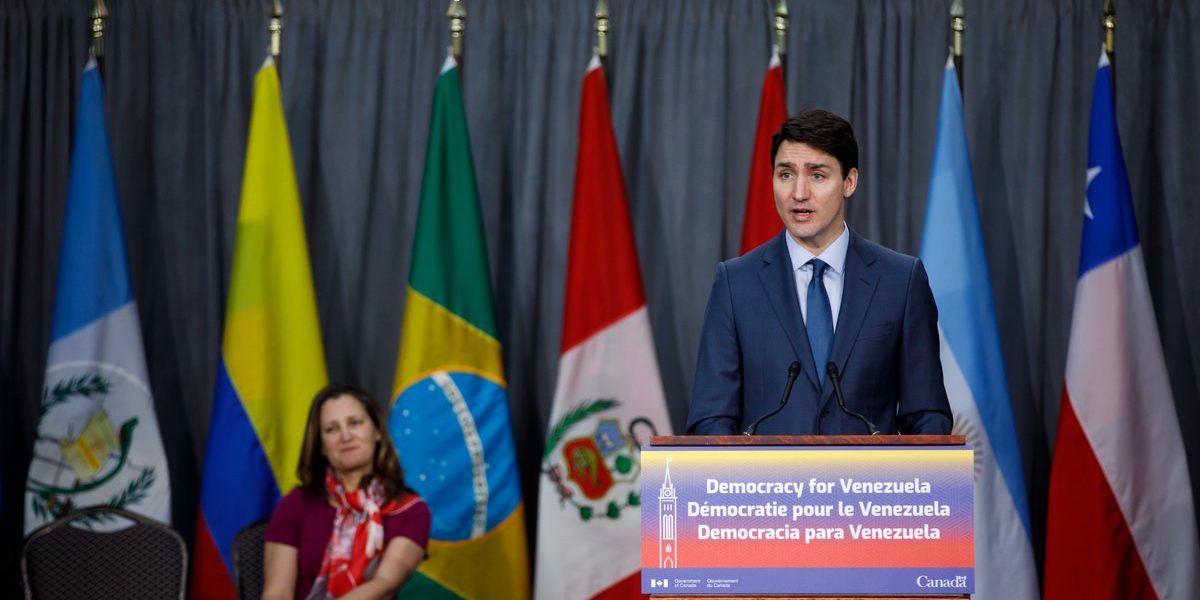 On the one-year anniversary of Canada’s defeat in its bid for a seat on the United Nations Security Council, the Trudeau government is hosting an International Donors’ Conference in Solidarity with Venezuelan Refugees and Migrants. While it may sound like a humanitarian endeavour, it’s the latest phase in Canada’s multipronged effort to overthrow Nicolás Maduro’s government, which has included plotting with the opposition to anoint an alternative president.

A number of opponents of the Venezuelan government will participate in the conference. But no one from Maduro’s administration is invited to address the event. Nor is the main issue driving Venezuelans to migrate likely to receive much (or any) attention, namely the seizure of Venezuelan assets and vicious economic sanctions.

The US, Britain and European countries have seized billions of dollars in Venezuelan government assets over the past two and half years. At the same time the country has faced steadily more extreme international sanctions. Canada has imposed four rounds of sanctions against Venezuela since 2017, which have reinforced and legitimated similar devastating US actions. According to the preliminary report by the current UN Special Rapporteur on the negative impact of unilateral coercive measures, Alena Douhan, “the [Venezuelan] government’s revenue was reported to shrink by 99%, with the country currently living on 1% of its pre-sanctions income.”

The sanctions have contributed to 100,000 deaths, according to former UN Rapporteur Alfred de Zayas, and massive outward migration. While Venezuela’s economic decline began when the price of oil dropped sharply in 2014-2015, the number of Venezuelans leaving the country spiked after the 2017 sanctions. According to Venezuela’s Encuesta Nacional de Condiciones de Vida (ENCOVI), 730,000 Venezuelans left the country between 2015 and 2017. In 2018 and 2019 that number more than doubled to 1.54 million. In March the United Nations Human Rights Council approved a resolution 30 to 15 (with two abstentions) urging all states to stop adopting unilateral sanctions as they impede “the right of individuals and peoples to development.”

In another indication of the two-faced nature of Trudeau’s concern for Venezuelan migrants, Canada has refused to renew the visas of Venezuelan diplomats. As a result, the last individual from that country’s government providing services to Venezuelans in Canada recently had to leave.

The reality behind Liberal rhetoric

The Security Council defeat was no doubt an embarrassment for the Trudeau government. Pushing for a seat was part of their rebranding of Canadian foreign policy after the Stephen Harper government. They need the public and particularly their electorate to acquiesce to their pro-corporate and empire foreign policy, which is the purpose of the government’s high-minded claims. But the Liberals are far more committed to supporting the US empire and corporate interests – which drives their Venezuela policy – than winning favour with populations and governments in the Global South, which largely explains why they lost the Security Council bid.

Similar rhetorical strategies are employed on a wide range of issues. Trudeau boasts about promoting an “international rules based order” while applying unilateral and illegal sanctions on countries and threatening the International Criminal Court to prevent it from investigating Israeli war crimes. A government representative says “we are committed to achieving a world free of nuclear weapons” while they refuse to sign the UN Nuclear Ban Treaty. The government says they follow a feminist foreign policy, while facilitating weapons sales to a patriarchal Saudi monarchy devastating Yemen. They claim to believe in a two-state solution but vote against UN resolutions calling for a Palestinian state. They say they promote democracy while they prop up a corrupt and repressive dictatorship in Haiti. (For other examples check out my House of Mirrors: Justin Trudeau’s Foreign Policy.)

The Liberals’ strategy works since the dominant media and most of Canada’s intelligentsia focus on government rhetoric rather than the underlying international policies. Politicians and people elsewhere are not as inclined to believe ‘benevolent Canada’ mythology, which is largely why the Trudeau government lost its Security Council bid. Maybe it’s fitting that on the one-year anniversary of Canada’s Security Council defeat, the government is organizing a humanistic sounding conference that’s part of an imperial strategy. It clearly illustrates Liberal hypocrisy.

On June 17, to mark the one-year anniversary of Canada’s defeat in its bid for a seat on the Security Council the Canadian Foreign Policy Institute will be hosting “International Solidarity Now: A gathering for a more just Canadian foreign policy”