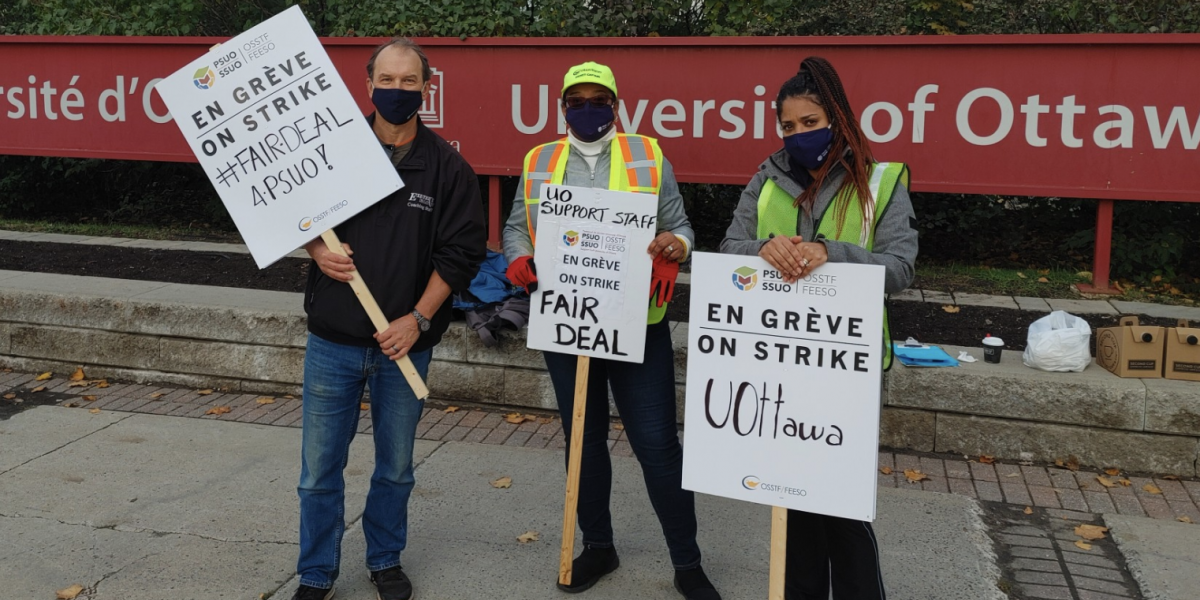 Members of PSUO-SSUO (affiliated with the OSSTF), the bargaining unit representing over 1300 support staff, have been on strike since October 19. The unit has been in bargaining for over 19 months, and a strike was triggered when the union rejected the university’s final offer because of its similarity to a previous offer made in June, which 80% of its 1,037 voting members rejected. Support staff provide all administrative services to students and faculty on campus, which have grown in importance given the university’s shift towards online learning and remote services due to the pandemic.

Cuts during a pandemic

Despite a reported annual surplus of over $200 million over the last three years, the university is proposing a series of devastating cuts for support staff, while refusing to fill vacant positions that have already been funded. In particular, a 20% cut to reimbursement for members’ medication from 100% to 80% has been tabled, a move that is cruel even outside of the current context of COVID-19. For students and professors struggling and in need of additional administrative support that could also create jobs, the university is simply leaving these positions unfilled and not answering questions as to why.

In addition, cuts to maternity and parental top-up leaves have been pushed by the administration. A reduction of a two-week to one-week waiting period to access EI has resulted in savings, which the union has proposed the university reinvest on a cost-neutral basis to put towards a top-up of 100% of salary for members on maternity leave. Unfortunately, the university is not budging on this proposal, while simultaneously wanting to increase the threshold for which members on extended parental leave can receive a full salary top-up.

A cut to retirees’ lump-sum allowance payments was initially proposed by the university, but the administration has since conceded. In its place, however, is a proposed cut in retirement benefits for new hires, a move that would effectively divide union members and disadvantage future hires.

The Ford government’s passage of Bill 124 last November constrained public sector workers’ ability to bargain for wage and benefits increases above 1%. However, the legislation leaves open the possibility for employers and employees to be exempted from this salary restraint through filing a joint application. Despite the union’s proposal to jointly apply for exemption, the university has repeatedly refused.

The need for solidarity

The only reason the University of Ottawa is functioning during COVID-19 is because of the hard work of its incredible support staff, who are not receiving the treatment they deserve. Many of the recent communications sent out to students and employees from the university emphasize how this is the first ever support staff strike on campus, and how rare it is to see any workers picketing on campus; one communication even declared this as the first strike ever on campus. Unionized workers are being forced to picket to defend themselves from administrative cuts during a pandemic. It is imperative that all university bargaining units, staff, faculty and students show solidarity with support staff by demanding a #FairDeal4PSUO.