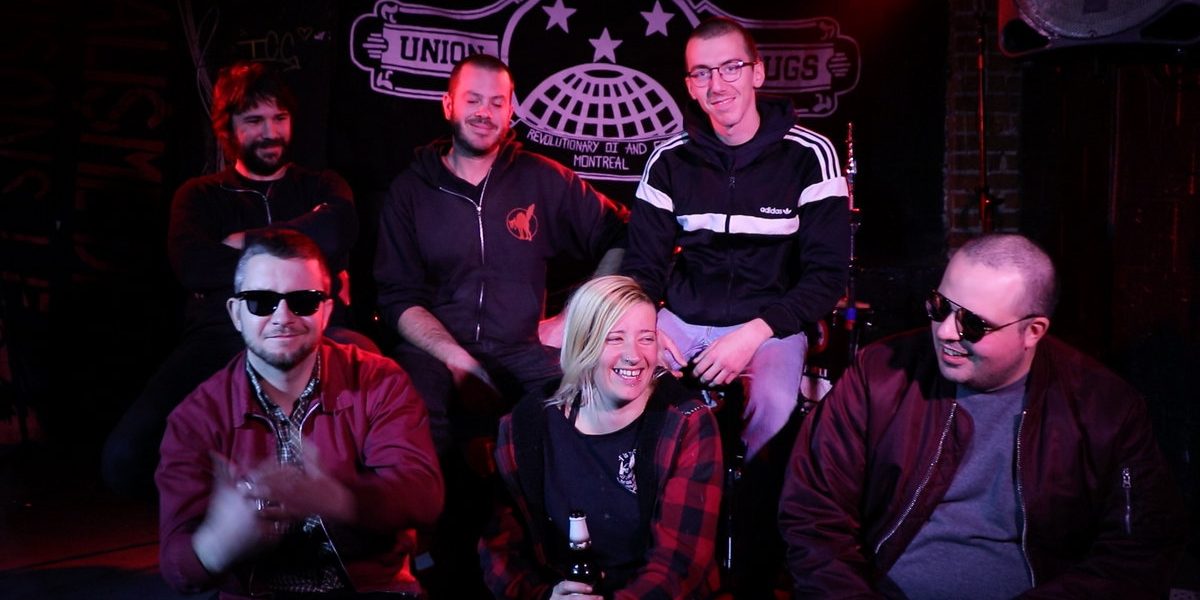 Union Thugs are a Montreal-based six-piece that play a mixture of folk and oi in the spirit of working class and revolutionary anthems. Their latest release, Folklore ouvrier (Worker’s Folklore), presents six of these anthems with a companion zine which details the history and meaning behind the songs and their importance. You can find info on Union Thugs on their Facebook, Bandcamp, and Instagram.

“This short album we dedicate to strikers and those locked out, grassroots activists, militants and delegates, professional shit-disturbers, and to everyone for whom taking it laying down has never been an option!” Folklore ouvrier is Union Thugs’ second release and first EP. The band makes it clear in their introductory track, “[W]e are not musicians, but workers that play music.”

The band sees their music as a tool for organization and the mobilization of political action. All members are active members of groups such as I.W.W. (International Workers of the World), COBP (Committee Opposed to Police Brutality), and RASH (Red And Anarchist Skinheads). To further this message, the EP is delivered with a companion zine, as well as info about anti-fascist movements today and calls to action. The tracks cover work from Anne Feeney, Woody Guthrie, and more. Union Thugs are leading the way in showing that music can not only be a tool for change, but one of revolutionary change and working class solidarity.

I was immediately blown away by the passion and energy that covers this EP from start to finish. Ouvrier is simply drenched in working class power and anti-capitalist spirit. While I wasn’t familiar with all of the songs presented, each one was performed with an infectious energy, and the bilingual zine helped give insight and context into those written for specific struggles.

I think it is sadly too common for bands, and certainly punk bands, to make leftist platitudes of political and social change without backing it up with action. The band is active with anti-fascist and pro-worker activities and heavily promote the struggles they are involved in, and those around the world. It’s clear that Union Thugs see the need for cultural expression that represents the ideas of the proletarian, and not the ruling class. By creating art that is not just for, but by and relating to workers, we are able to actually share and communicate radical ideas while also creating platforms for organization.

As mentioned before, the album’s opener, “Intro,” is probably the most pump-in inducing song I’ve ever heard. Like a youth crew singer getting ready for gang vocals, you can’t help but start pacing around the room and throwing your fists out. It also gives the band a chance to lay the cards out on the table: they’re here, ready for a fight, and ready to unite. “We are fed up and we want change! We don’t think that this change will come from ballots. Ignoring the problem and participating obediently and quietly will not do us any good. We think it’s through organizing our workplaces, our neighbourhoods to take back control. To produce by the community for the community, without bosses to steal the fruits of our labor.” They then turn to the need for international and intersectional solidarity and really get listeners engaged to not only hear what they have to present on the album, but take action afterwards.

The rest of the album is a great lesson in historical struggles, with the zine filling in the gaps and relating their relevance today. Part of what makes this album so great is learning the history of these powerful anthems and getting them stuck in your head for days. “War on the Workers,” is an earworm that gets any picket line shimmying. The track, by activist and composer Anne Feeney, is dedicated to Jim Beals and Karen Silkwood. Beals was killed on the job and Silkwood died trying to expose toxic working conditions. Today, workers are being forced to bear the brunt of the Covid-19 crisis, dealing with increasingly unsafe workplaces and being stripped of their pandemic pay, often in minimum wage positions.

Another highlight is their version of “Union Maid.” While the first few tracks on the album place the musical emphasis on the group’s oi sound, “Union Maid,” goes deeper into the folk side of their repertoire. The zine gives the background to the song, something I was unfamiliar with. In 1940, The Almanac Singers (of which Guthrie was a member) were touring with Bob and Ina Wood, who ran a political bookstore in Oklahoma city where Bob was the secretary of the state’s communist party and Ina was an organizer. The group was performing a series of concerts in solidarity with striking hooverville workers. Ina spent time with Guthrie, criticizing him for putting communist women on the periphery of his songs. He took the message to heart, writing and performing the song while on the same tour.

Folklore ouvrier is working class music for the working class movement. It’s inspiring, catchy, radical, and most importantly, good. By delving deep into the revolutionary songbook and providing context for today, Union Thugs are providing a solid memory of class struggle while also proposing organization and solidarity for those fighting for change in the present. If you’re looking for some punk and folk that asks more of the listener than to simply agree with the lyrics, but one that provides you with the next steps, then Folklore ouvrier is the perfect release.