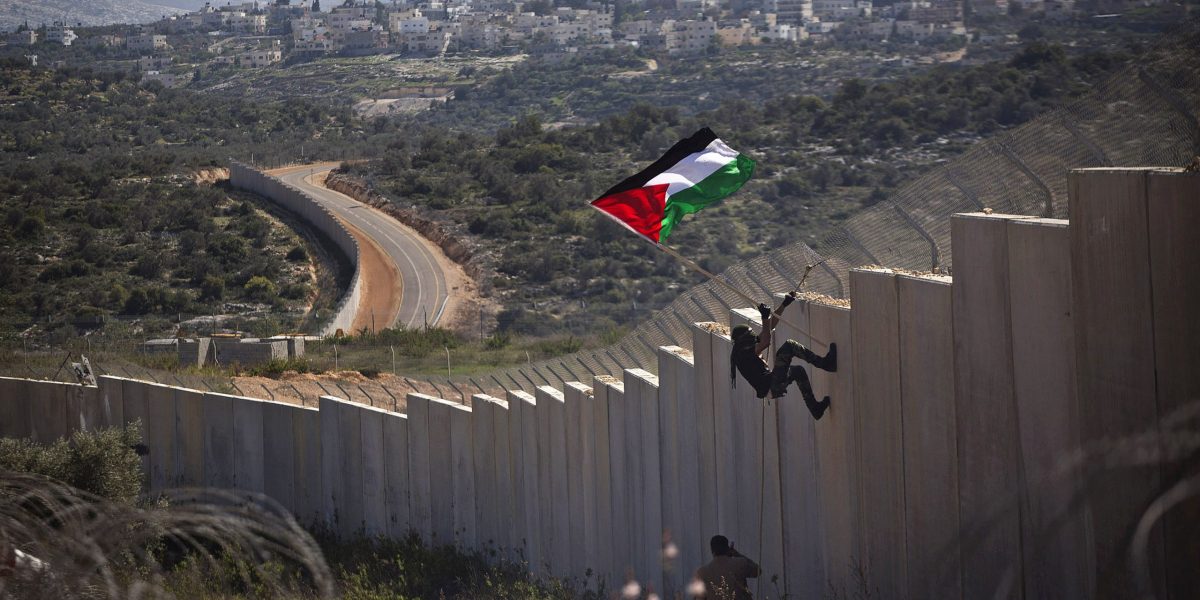 Palestinians have recounted the occupation’s atrocious crimes for more than 74 years. NGOs like Human Rights Watch (HRW), Amnesty International, United Nations, and B’Tselem have published records detailing some of what Palestinians have been saying for years: apartheid is deeply entrenched into so-called Israel’s state structure. These reports are published and received as groundbreaking news, disregarding the decades of Palestinian history, literature, and academic research documenting Zionist violence.

Apartheid is secondary to settler-colonialism

Zionist settler-colonialism is sustained by three criteria: expanding illegitimate borders through the annexation of land, violence against the native population, and Jewish ethnic exclusiveness and supremacy. Ethnic state-sanctioned segregation and apartheid are thus what follows when all three fundamental factors of Zionism are applied. It is imperative to understand that the origins of Zionist settler-colonialism cannot be divorced from imperialism and capitalism. The expansion of European imperialist colonialism, industrialization in Europe and the systematic exclusion of Jews from the labour market, and opportunist European nationalism guided the formation of Zionist ideology.

The first Zionist settlers in Palestine systematically prepared the land for the formation of an exclusively Jewish ethnostate and was very much linked to wider imperial projects. Bourgeois settlers acquired land in strategic locations and proletarian settlers implemented boycotts of Palestinian produce and businesses. The crude implication that the Palestinian and settler-colonial proletariat can and should unite to seize the modes of production from the bourgeoisie is a reductive fallacy. Though the settler working class is exploited by its bourgeois counterpart, it materially benefits from Zionist settler-colonialism and is therefore consistently content with its class structure at the expense of Palestinian bloodshed. A material analysis of the settler-colonial working class demonstrates that its material interests are aligned with those of the imperial core and the settler-colonial bourgeoisie, not collective proletarian emancipation from capitalist exploitation.

Apartheid is thus secondary to Zionist settler-colonialism and is a product of decades of methodical, not arbitrary, ideological programming in Palestine, primarily via the World Zionist Organization’s quasi-state apparatus and allyship with British imperialism. A “state within a state” was formed; Zionist settlers were allowed by the British mandate to establish their own schools and military, the Haganah, and the British also trained Zionist armed forces. Zionist ideology, with its clear political goal of exterminating the native Palestinian population, was entrenched into these institutions and manifested itself in many ways, one of which being apartheid inspired by Afrikaner colonists in South Africa and Jim Crow in the United States.

Visualizing Palestine’s Born Unequal series aptly portrays the occupation’s systemic restriction of Palestinians’ movement. As of today, only Palestinians who receive travel permits from the occupation’s illegitimate courts are allowed to enter or move between the occupied West Bank, Jerusalem, and the territories occupied in 1948. A 700-kilometre apartheid wall separates the occupied West Bank and East Jerusalem, and approximately 705 permanent obstacles, including 140 illegal military checkpoints, are scattered along the wall and between cities and villages. These structures are used to conduct random vehicle and physical searches, and are oftentimes death traps for Palestinian children and adults alike.

In addition to the apartheid walls and illegal checkpoints, a segregated road system dictated by the colour of drivers’ license plates maintains the structural separation necessary for the occupation’s goal of maintaining ethnic exclusivity. Palestinian license plates are either completely forbidden from accessing certain roads and need to apply for permits to drive on restricted roads, while Israeli license plates are not barred from accessing any roads. Under the guise of “security,” this road system facilitates the occupation’s annexation of more Palestinian land, the construction of illegal settlements, and denies Palestinians employment.

In 2015, 52% of settlers report condoning the separation of Palestinian and Jewish passengers on buses in response to the proposed plan to segregate public transport. Palestinian citizens of so-called Israel are also methodically confined to approximately 3% of the land in the 1948 occupied territories, effectively barring Palestinians from accessing schools, services, and employment exclusively allocated to Jewish settlers. In contrast, settlers are free to move through, live, work, and visit all of historic Palestine.

Since 2006, Gazans have been living in a densely-populated open-air prison subjected to an air, sea, and land blockade, which bans all exports and most imports, and forbids Gazan residents from exiting without a permit. The devastating repercussions of the blockade on Gaza include 20-hour-long power outages, rampant food and financial insecurity, depleting medical supplies and medications, and catastrophic environmental crises.

All Gazans are also required by the occupation to obtain exit permits to access Palestinian hospitals in the occupied West Bank and East Jerusalem, and approximately 2000 individuals apply for a permit each month. A third of these applications to access lifesaving healthcare were rejected by the occupation between January and May 2020.

While Gazans endure the pandemic and surging COVID-19 cases, the occupation’s plans for vaccination excluded Gaza’s already collapsing healthcare system. Gaza continues to rely on donations to vaccinate its population, while settlers enjoy booster shots and decreased COVID-19 restrictions. The inhumane air, sea, and land blockade on Gaza and the occupation’s perverse denial to allow Palestinians access to healthcare, coupled with the occupation’s repeated bombardment of Gaza, all serve to accomplish a central component of the Zionist dogma: the ethnic cleansing of Palestine’s indigenous population to form an exclusively Jewish ethnostate.

The creation of two separate “justice” systems for settlers and the native Palestinian population is a necessary component of the Zionist project’s goal of ethnic exclusivity. Military law that exclusively applies to Palestinians materialized in the 1945 Emergency Defense Regulations, before the 1948 occupied territories were recognized as so-called Israel.

Palestinians were forbidden from accessing “closed zones” and working or living in other cities or villages without a permit issued by the military. Following the Naksa, the occupation adopted “Military Order 101,” effectively criminalizing ostensible political “incitement” and “hostile propaganda.” Several orders followed – exclusively applicable to Palestinians, and military courts were subsequently established in the occupied West Bank. These illegitimate Orders allow the Israeli Occupation Forces (IOF) to indiscriminately arrest and charge Palestinians for a slew of “offences,” including the interpreted “intention to harm.”

In 2009, Military Order 1644 was established, positing that Palestinian children who had previously been illegally detained by the occupation be tried in military courts as adults. Approximately 700 Palestinian children are extrajudicially held in administrative detention or tried before the occupation’s military court every year. Defence for Children International reports Palestinian children being subjected to kicking, beatings, and physical and psychological torture during interrogations and imprisonment. Unsurprisingly, their settler counterparts experience none of the aforementioned extrajudicial imprisonment and brutality.

As of today, 500 Palestinians are held in administrative detention without charges or a trial, on account of “secret evidence” undisclosed to the political prisoner and their legal counsel. Administrative detentions are unilaterally decreed by military commanders and are used to blackmail Palestinians or extract confessions through psychological and physical torture, and to keep Palestinians imprisoned through extrajudicial successive extensions of their detention. Oftentimes, condemnation to exile and dispossession are used as leverage against political prisoners, forcing them to choose indefinite administrative detention as opposed to leaving Palestine. Once again, settlers are not subjected to any of the above.

Palestinians can never find justice in illegitimate courts established by a settler colony that is predicated on the annihilation of the Palestinian people. The occupation’s segregated courts and “justice” system, potent indicators of apartheid in action, are therefore means of sustaining settler-colonialism, and cannot be separated from it.

A struggle for complete national liberation

NGOs’ reports ultimately essentialize the Palestinian struggle for national liberation to a struggle for civil or human rights within so-called Israel’s colonial borders. That is not true; we seek liberation that transcends liberal confines of “human and civil rights.” What would human rights even mean, if given to us by the entity occupying our land?

Our goal of dismantling the Zionist project in all of its forms, from the illegitimate settler-colonial state to the comprador Palestinian Authority and the international Zionist lobby, has never faltered. Importantly, we reject the “NGO-ization of settler-colonialism” and Palestinian resistance.

As George Habash and Ghassan Kanafani teach us, our common enemies are Zionism and imperialism. We struggle against the presence of the illegitimate settler-colonial state itself, not its refusal to grant us ambiguous “human rights.”

Join Spring’s event “How do we build solidarity with Palestine on campuses?” on Wednesday, March 16 at 7:00 pm EDT. Register here: https://us02web.zoom.us/webinar/register/WN_W6Vxuk-JSJOqRBcd2HYG_Q