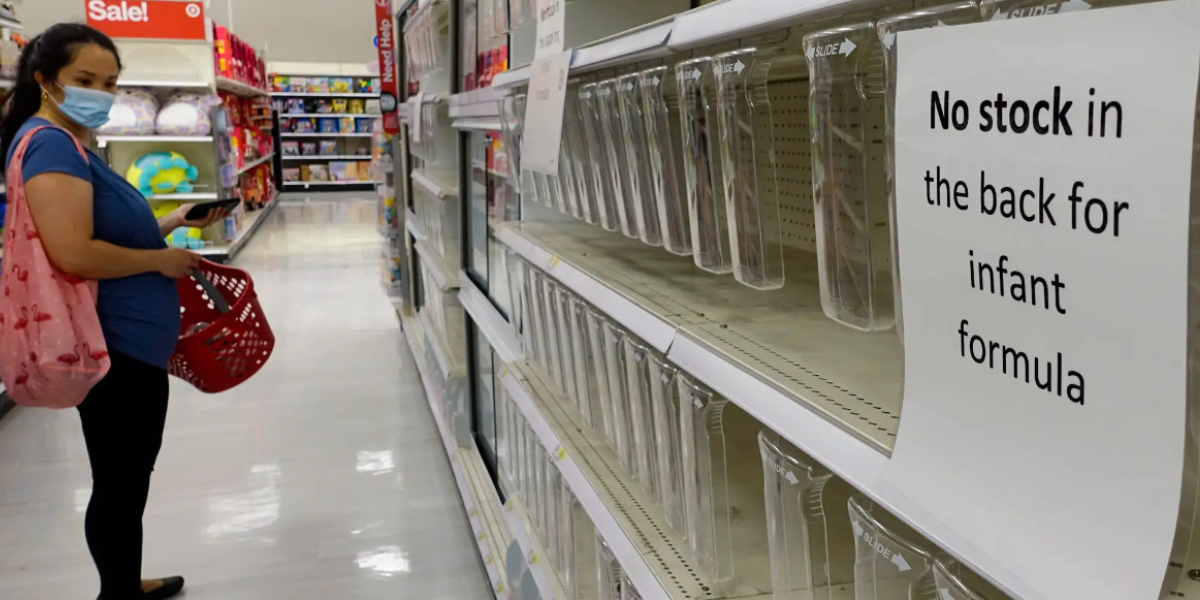 Having a baby during the COVID-19 pandemic has not been easy. Many parents have had to give birth with limited or no support people. Social distancing and lockdowns shut down many prenatal classes and programming for parents. Redeployment of health care workers meant cut backs to postpartum public health support. Many babies went months or even years without seeing other babies. Child care centres have been a key location of the spread of COVID-19. And now, corporate greed has left many families struggling to find infant formula after a major product recall by one of the main producers of formula in North America.

Last month, Health Canada publicly declared a shortage of hypoallergenic formula – made for babies with allergies to cow milk protein and other health conditions. But many families have been struggling to find a reliable supply of their usual infant formula for several months. According to preliminary results from a recent study, a third of formula feeding families have had difficulty finding formula at their local stores.

Infant formula is a unique food product in that it does not have substitutes. It is recommended that infants under six months only consume breast milk or infant formula, and that breast milk and/or formula remain the main source(s) of calories for babies until they are a year old. A food shortage for this extremely vulnerable population should be at the centre of our concerns about food security and food justice, but many families are struggling with the formula shortage in isolation.

How did this food shortage for babies happen?

Infant formula is extremely vulnerable to disruptions in supply chains. A small number of large corporations control the vast majority of infant formula production. Just three companies produce 90 percent of the formula fed to babies in Canada and 100 percent of Canada’s supply of formula is imported.

The infant formula shortages being experienced by families in Canada and the U.S. were caused in large part by a single plant closure in the U.S.

In February 2022, formula manufacturer Abbott voluntarily recalled formulas produced at its facility in Sturgis, Michigan. The Canadian Food Inspection Agency followed this with its own recall. The recall came months after concerns about contamination of formula with cronobacteria were raised in a report from a whistleblower sent to the FDA. While no contamination was directly linked to formula on the market, cronobacteria was found inside the Abbott plant in Sturgis. According to the U.S. Center for Disease Control, cronobacteria can cause deadly sepsis and meningitis in infants, particularly in the first two months of life.

Investigations revealed that conditions at the Abbott plant in Sturgis, Michigan were “egregiously unsanitary” according to a top official of the US Food and Drug Administration department.

Abbott produces a quarter of the formula used by families in the U.S. and is one of the three main  companies that produces formula for Canada. Abbott is also a hugely profitable company, reporting sales of over $43 billion in 2021 globally. They also profited from the pandemic, selling $7.7 billion worth of rapid tests globally in 2021, including 143 million tests to the government of Canada.

Under our current capitalist system, multi-billion dollar corporations like Abbott are allowed to profit off the needs of infants. And, even with oversight, these corporations seem more driven by their bottom line than producing a safe, and readily available food source for babies.

“You can’t breastfeed your way out of poverty”

A particularly unhelpful, and annoying, response to parents facing a shortage of formula has been messages that tell parents to breastfeed/chestfeed instead (see for example this especially egregious tweet from Bette Midler), something that does not actually do anything to feed babies facing an urgent food shortage.

These simplified messages not only miss that nursing is a reproductive justice issue and parents cannot be forced to  feed another being with their bodies, the reality is that families face significant barriers to feeding their babies regardless of how they are fed. The shortage of infant formula is not caused by and cannot be addressed through individual feeding choices.

The shortage of formula supply is just the latest food security issue impacting families with infants. One of the most significant barriers families face to feeding babies is money. Children under two experience the highest rate of child poverty, with one in five babies under two living in poverty in Canada.

Dr. Lesley Frank, author of Out of Milk: Infant Food Insecurity in a Rich Nation, says that people are often surprised that babies have a higher rate of poverty than any other children, but the reality is that low-income families with infants are not provided with the economic support necessary to feed their babies.

“Feeding a baby is labour, and it’s labour that is unrecognized, it’s not supported economically. The wage and income replacement of maternity leave is woefully inadequate,” Frank says. Adding that the extension of maternity benefits to 18 months just makes people poorer for longer.

Families on income assistance, or low-wage earners receiving maternity benefits already cannot afford a basic nutritious diet for them and their families, whether breast/chestfeeding or formula feeding, according to Frank’s research. This means that parents are already sacrificing their own diets and relying on food banks and other forms of food charity to feed their families.

“You can’t breastfeed your way out of poverty,” says Frank.

And to compound the problems, you also usually can’t find infant formula through food banks.

Instead, families resort to “formula foraging,” says Frank, where families forage for formula through buying second-hand formula online (which may include open cans), shoplifting formula, or selling unused formula online in order to pay for new formula.

This foraging is made worse by the current supply issues, forcing families to go to multiple stores to find the formula their baby eats and often paying higher prices at the store.

Instead of focussing on how babies are fed, explains Frank, we should be more concerned that babies are getting fed at all. Without support for families, babies are going to continue to face food shortages.

Understanding infant feeding through food justice could help find solidarity between breastfeeding advocates and formula feeding families by looking at the systemic conditions of infant food security, instead of only focussing on the activities of individual families.

“We need to support families in feeding their children in the ways they choose to feed their children, recognizing that it’s not always a choice,” says Frank. “There are systemic conditions that shape the ways that babies end up being fed in individual families.”

A food justice approach helps to make the connection between increasing wages and supporting breast/chestfeeding, but it can also lead us to question why multi-billion dollar companies are allowed to profit off the basic needs of infants.

Food justice can help answer why we accept a food system for babies that is so extremely vulnerable to the actions of a few corporations.

Food justice can even help us make the links between war and food shortages as the war in  Ukraine is currently impacting the availability of sunflower oil – a key ingredient in formula – something Health Canada says could exacerbate the shortage of formula.

And in particular, food justice can help us recognize that when parents can’t find food for their babies, it is a problem created by our political and economic systems, which can and must be changed.