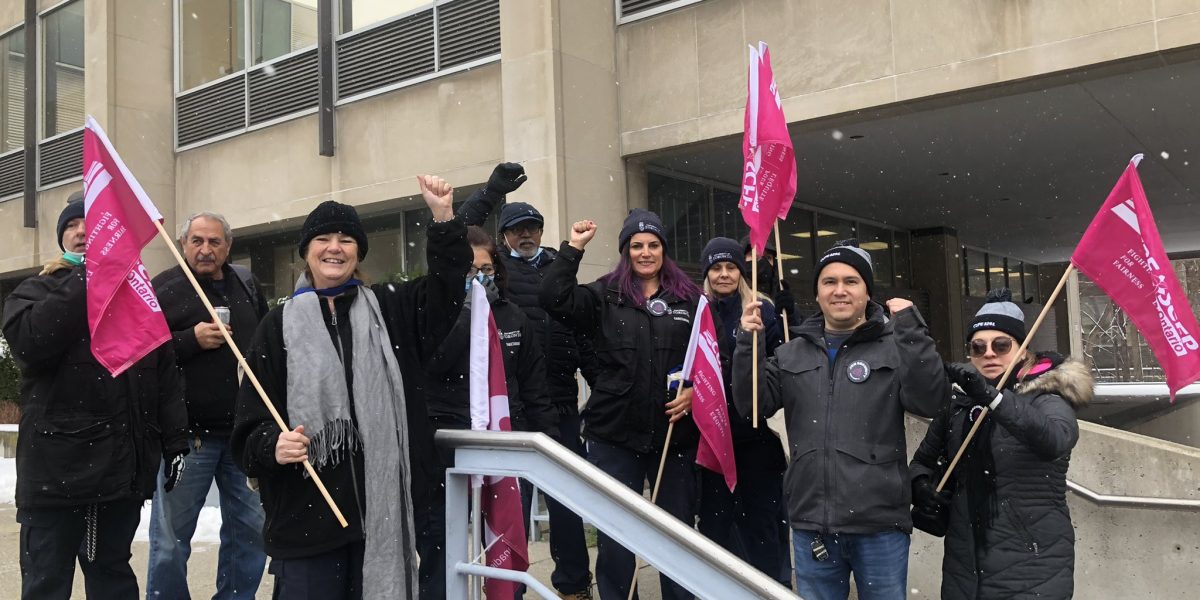 Over 700 service workers at the University of Toronto–members of CUPE 3261 – will be in a legal strike position on Monday, November 21, the same day as 55,000 education workers across Ontario are set to walk off the job.

The U of T service workers are fighting the contracting out of their jobs. In the last decade, over 150 of the university’s caretaker positions at the St. George campus have been contracted out to third-party, for-profit agencies that pay close to minimum wage and have few, if any, benefits.

The consequence is that good jobs–unionized, with decent pay and benefits, and in good working conditions–are rapidly disappearing from campus.

On Wednesday, the union held a Day of Action for Good Jobs at U of T, co-organized with CUPE 3902, whose Unit 3 members (contract faculty) are also fighting for good jobs. The rally attracted nearly a hundred members and supporters, including students and faculty.

CUPE 3261 president Allan James was one of the speakers: “We are asking the University of Toronto to do the right thing and bring caretaking services back in house.”

His speech echoed the demands of the campus-wide campaign, Good Jobs U of T:

According to the campaign website, “good jobs lift workers out of poverty, supporting racial justice and gender justice. Good jobs serve the U of T community and align with U of T’s values of ‘equal opportunity, equity and justice.’”

Other speakers, including CUPE Ontario president Fred Hahn, slammed the university’s hypocrisy for cutting costs on the back of U of T workers, and connected the struggles of caretakers and contract faculty:

In between the speakers, the crowd chanted:

The fight for good jobs at U of T is part of a wider fight for decent work in all parts of the education sector–primary, secondary, and post-secondary–and all across North America. At the same time as 55,000 education workers are preparing to strike again in Ontario, 48,000 graduate student workers at the University of California are on the picket lines all across the state.

In the wake of Bill 28’s repeal in Ontario, workers are feeling more confident about what they can fight for and how they can win. What started and continues to grow in the education sector could build the confidence of workers in other sectors–health care, child care, long-term care, transit, and others–to do the same thing.

As U of T workers approach their strike deadline, they are calling on the public’s support to help them get a fair deal. Here’s how you can help:

The next few days will be critical for these and other education workers. What we do now could make all the difference in helping them win the justice they deserve.

For more information and the latest updates, please visit CUPE 3261 and CUPE 3902.