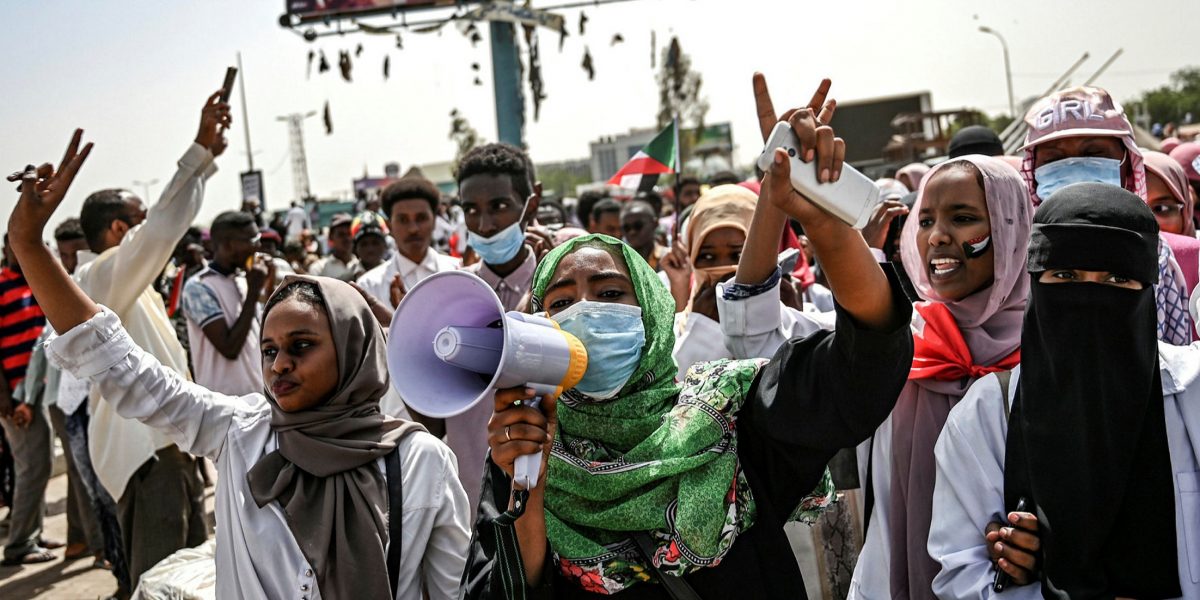 It has been almost three years since millions of Sudanese women and men marched the streets demanding a new reality that reaches beyond their immediate struggles of violence and poverty to a call for freedom, peace and justice. This was the Sudanese revolution of December 2018 which ended Omar al- Bashir’s 30 year dictatorship. Two years ago, in August 2019, a transitional government was formed as a partnership between the military leadership and the coalition of the opposition (Forces of Freedom and Change, FFC), to lead the path to a democratic Sudan (see Amandla! 67).

The dynamic of the two “partners” ruling post-revolution Sudan is often described by the Sudanese prime minister Abdallah Hamdok as harmonious. This harmony, between representatives of a military regime and the civilian opposition that marched to topple it, can be puzzling at first glance. To understand it, we will explore the Sudan shaped by the “harmonious partnership” and the tools shaping it.

Toothless committees instead of transitional structures

At its highest level, Sudan has been shaped into a state without any structure that would allow citizens to engage in their governance, or challenge those in power. Two years into the transitional period, the Transitional Legislative Council has not been formed. This is despite repeated promises both by the FFC and the PM. The Higher Council for Judiciary that is supposed to decide on the Constitutional Court and judicial reform has not been approved. The same goes for the Higher Council for Prosecution, the different commissions for Legal and Institutional Reform, Transitional Justice, Gender Equality, Human Rights, etc.

This tactic provides the public with the illusion of governance and a distraction from corruption, negligence and violations. Inclusion in committees also ties a good portion of the politically active to the existing regime, as well as providing them with the illusion of access to decision making. This can easily be confused with power, in the absence of proper analysis.

On the other hand, we see developments in other areas. Sudan has been removed from the list of “State Sponsors of Terrorism” (SST). There have been several economic conferences for “Friends of Sudan”, in Berlin, Riyadh, and Paris. These are conferences designed to introduce Sudan as convenient raw material for international investment. They are celebrated in official media. To achieve this, the government is introducing “legal reform” that safeguards international investments. This includes passing five new laws on the financial system, partnership between the public and private sectors, investments and industry.

A look at the track record of the transitional government on legal reform shows that in the past two years, and without a parliament, the transitional government has passed eighteen new laws, eight new bylaws, and five major amendments to existing laws. Much can be understood from the pattern of these reforms. Changing the economic infrastructure of the state to lay the ground for “opening up the country for investments’’ is the major theme of both the economic laws and those related, so as to meet minimum human rights obligations.

The reorganising of the economic sector within this pro-investment path has manifested in removal of subsidies, privatisation and economic “liberalisation”. The neoliberal project in Sudan was accelerated in an aggressive manner. It has created the expected inflation, increase in poverty, and protests met with varying levels of violence. Ironically, at the same time as the state apparatus continues to crack down on citizens, especially outside the capital Khartoum, the country ratified both the Convention Against Torture and other Cruel, Inhuman or Degrading Treatment or Punishment, and the International Convention for the Protection of All Persons from Enforced Disappearance. This was praised by the international community.

So the characteristics of the “harmonious project” can be summed up as:

This is a project that is “in harmony” with the regional investments and global political goals of the regional and international “friends” supporting the civilians, the military, or both. It is producing a reality very different from that dreamt and fought for by the protesters of the December revolution.

Divergences from the revolutionary path were a risk predicted by the protesters as the partnership between the military and the opposition leadership was taking shape. At that time, the safeguard proposed and accepted by many was the “power of the burning tyres” and marches in the streets. Protests were trusted and expected to bring down any government that took the counter-revolutionary path, like they once brought down Bashir. This safeguard is yet to materialise with any significant impact, despite several counter-revolutionary decisions and actions from the government.

To sustain this situation, the government has utilised several tactics to manipulate the general public and tame their demands for revolutionary change. Neoliberal policies – privatisation and minimising the role of the state in service provision – were introduced in the same way they always are: “There Is No Alternative”. This is the “realistic, non-ideological and technocratic solution”.

Regional and international public support mostly came in the form of festivities aimed at lending legitimacy to the government’s policies of impoverishment, while dangling the over-used carrot: rejoining the international community after over 20 years of sanctions. The festivities varied from the Paris conference to “support Sudan’s historic transition towards democracy”, to tweets by foreign diplomats, ignoring protocols, to announce support for desubsidising fuel while the decision is still being debated by the National Economic Conference.

These known tactics, manoeuvres and catch phrases of aggressive neoliberal projects have achieved significant success in Sudan due to the welcoming environment of the country’s political reality. Most of the protestors – and young Sudanese in general – have lost faith in politics. They have equated it over the years with the elitist and bourgeois politics of Sudan’s ruling class and opposition leadership. The repeated treasons and several forms of corruption displayed by the bourgeois leadership over decades are used to justify a call for “apolitical governing”, and for a “non-ideological” path away from the “filth of politics”. This has also enabled the “apolitical technocratic government” to redirect the revolutionary energy of the youth and grassroot organisations towards “practical and apolitical” goals – cleaning streets and joining committees.

However, several political grassroot organisations in Sudan are adopting a stronger analysis and admirable tools. Examples of these include revolutionary neighbourhood committees, organising political education programmes, and workers associations rejecting austerity and forcing a public discussion of economic policies.

The growth and development of organised popular resistance can provide Sudan a path out of the neoliberal grab only when supported by proper and contextualised analysis of political economy. It is the lack of such analysis that allows for a phrase such as “encouraging private investments” to be presented as a favourable result of the Paris Conference, instead of what it truly is: a threat to the economic rights of the majority and a divergence from the revolutionary demand for justice.

Proper and contextualised analysis of political economy can only be provided by an organisation aware of its political nature, committed to the interests of the impoverished majority of the Sudanese population, and possessing the proper analytical tools to present solutions capable of improving the material reality of the lives of the majority. These requirements describe the revolutionary organisations and politics necessary if we are to imagine and walk a practical and realistic path towards protecting the economic rights of the majority and achieving the revolutionary demand for justice.

This is republished from Amandla!