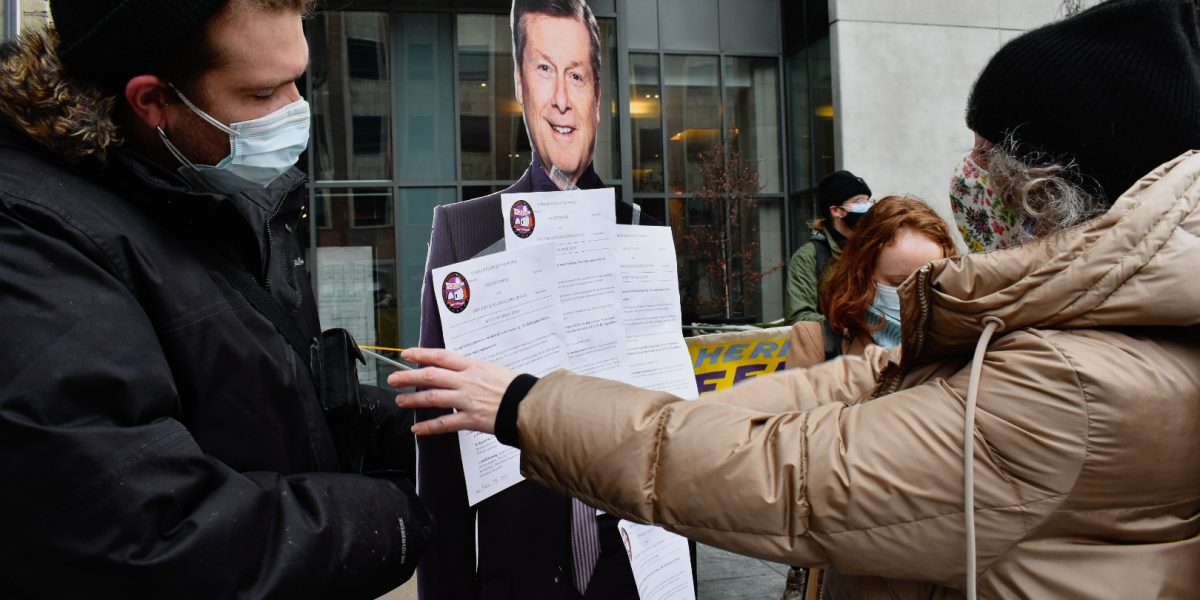 On Sunday, February 28, the Encampment Support Network (ESN) organized a peaceful action in front of Mayor John Tory’s residence at One Bedford Road. While Toronto police guarded the front entrance, community members from across the city arrived throughout the day to sign a Notice of Action and deliver it to a life-sized cut-out of the Mayor Tory.

The notice called upon the mayor and Toronto City Council to immediately halt its use of injunctions against Khaleel Seivwright who built tiny shelters for encampment residents across the city. The notices also called upon Tory and councilors to immediately stop the policing and harassment of community members living in encampments.

On Feb. 19 the City of Toronto served a Notice of Application for a court injunction against local carpenter Khaleel Seivwright, to halt the construction, placement, and relocation of tiny shelters. Over the past few months, Toronto Tiny Shelters have provided warmth, privacy, and security for many people in encampments.

“The City of Toronto has a housing crisis. This pandemic has made it worse. The shelter system has left many people with no options. With winter approaching, I knew that without shelter many people would die as they do in Toronto every year.”

Each shelter includes a smoke and carbon monoxide detector and a fire extinguisher. Khaleel gave the Tiny Shelters to the community to determine amongst themselves who needs them the most.

“We are approaching a crisis as the we get deeper into the winter. There are simply not enough shelter beds and hotel rooms to house people. In the gap, Khaleel began to build tiny shelters for people who are forced to live outside. The city has responded by calling the shelters ‘waste’ and has taken up a policy of dismantling the shelters.”

Housing justice advocates have criticized Tory for refusing to use emergency powers available to him to call for an end to all evictions in the city in the midst of the pandemic and an unprecedented housing crisis.

Doucet explained that with a COVID-19 outbreak in shelters and hotels, many people have opted to live in the encampments because they can maintain social distancing while also living in a community of their choosing. Based on the city’s own data, there are 17 active outbreaks of the COVID-19 virus in shelters and congregate settings in Toronto.

“Encampment residents are building an infrastructure where the city has failed, but the city’s response is to dismantle the camps and displace people,” said Doucet.

According to city data, each month about 600 new people are using the shelter system during the pandemic. Many racialized communities, where front-line workers live in overcrowded apartments, are facing the prospect of mass evictions. Without paid sick days, front-line workers are forced to go to work and risk contracting the virus or stay at home and possibly end up on the streets.

Greg Cook works as an outreach worker at Sanctuary Toronto and is a member of the Shelter and Housing Justice Network, a partner of the ESN. He explained that the city’s current strategy is focused on rendering homeless people invisible.

“The housing crisis in the city forces people to live near ravines and under bridges but these places are out of sight,” said Cook. “Encampments set up in places like Liberty Village, Alexandra Park, Moss Park, and Trinity Bellwoods Park are targeted by the city because of their high visibility.”

“The city wants to invisibilize homelessness. The encampments have brought what was always a problem – borne out of the prioritization of development and profit over the basic needs of all of Toronto’s residents – into the public eye. So the city has been working hard to clear them. This lawsuit against Khaleel is part of that strategy – with the city using to the law to justify inhumane policy that will result in further harm and death.”

“These will continue despite the city’s individual targeting,” said Atri. “The city’s priorities are clear when it chooses to target individuals in communities committed to community support – Instead of building dignified housing for all.”