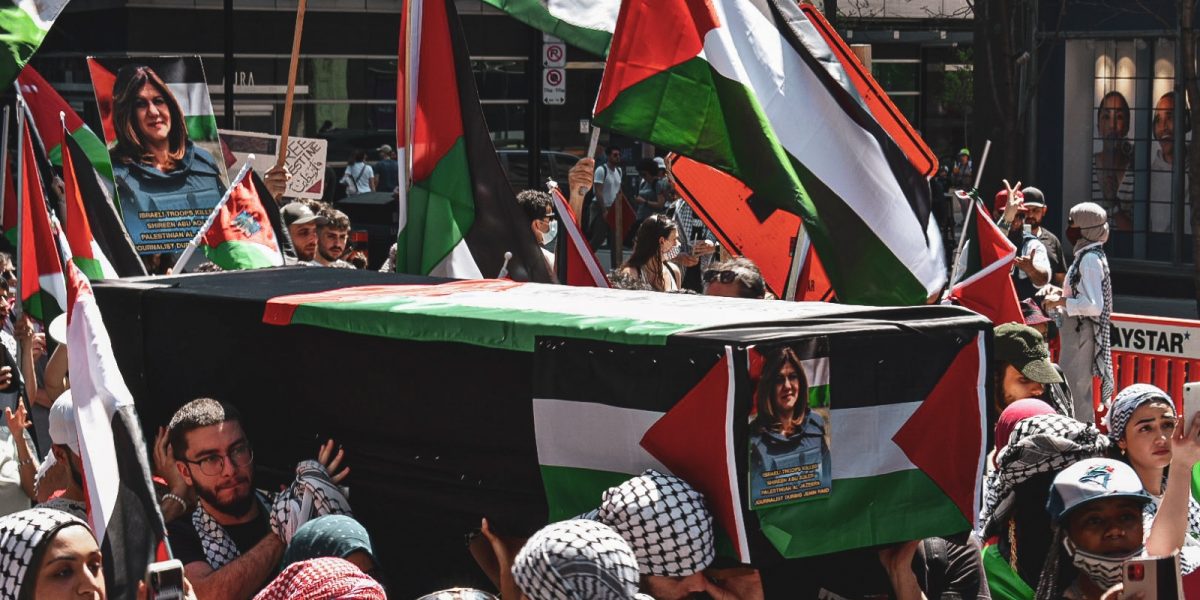 On May 15, Palestinians mark Nakba Day (“the catastrophe” in Arabic), to remember the mass expulsion of Palestinians that accompanied the creation of the state of Israel. Yesterday, thousands marched through the streets of Toronto demanding the right of all Palestinians to return to their homeland, and justice for slain journalist Shireen Abu Akleh.

Over 700,000 Palestinians were driven out of their homes by militia groups that eventually formed the modern Israeli Defence Forces (IDF). Israeli militias destroyed more than 500 Palestinian villages in 1948. Palestinians were ethnically cleansed from their land, and displaced into refugee camps in East Jerusalem, the West Bank, the Gaza Strip, and neighbouring countries like Egypt, Jordan, Iraq, and Syria.

Yara Shoufani is an organizer with the Palestinian Youth Movement (PYM). Her grandfather was 16 during the Nakba and displaced from Safad in northern Palestine near the border with Lebanon. Her grandfather’s side of the family sought refuge in Southern Lebanon, where he met Yara’s grandmother.

She recounted growing up with the stories of the occupation of both Palestine and Southern Lebanon by the state of Israel. “The Nakba is not a singular event. It’s a process that began before 1948 where Zionist colonialism started as early as the 1920s and was facilitated by the British mandate.”

The Nakba never ended and has been a continuous process as Israel continues to expel Palestinians, steal their land, and destroy their homes and communities for Israeli settlements. More than 12 million Palestinian refugees remain stateless today. As Shoufani stated

This year marks 74 years of the catastrophe of Palestinian dispossession from their homeland. It arose in the same week that Israeli occupation forces murdered the prominent Palestinian journalist Shireen Abu Akleh.

“Shireen is the 50th journalist to be assassinated by the Zionist state since 2000. We can confidently conclude that there is an ongoing strategy to target journalists telling the truth,” noted Shoufani. “Shireen was not coming to Palestine from another part of the world. She was a Palestinian and was recounting her own life story; she wanted to tell the story of the ongoing Nakba.”

Shireen Abu Akleh was clearly marked as a journalist with a press vest when an Israeli soldier shot her dead in the Jenin refugee camp. Yara explained that the site of Shireen’s death, Jenin, is significant because the people of Jenin have been steadfast in their resistance. To date, not a single Israeli settlement exists in Jenin. Shireen wrote about Jenin as a place of particular importance to her in 2002 during the Second Intifada when occupation forces assaulted Jenin.

Thousands held the intersection of Yonge-Bloor in front of the Israeli consulate as speakers like Yara Shoufani, Ali Mullah (a decades-long organizer in the Palestinian liberation struggle), and John Clarke (a veteran anti-poverty activist) addressed the crowd.