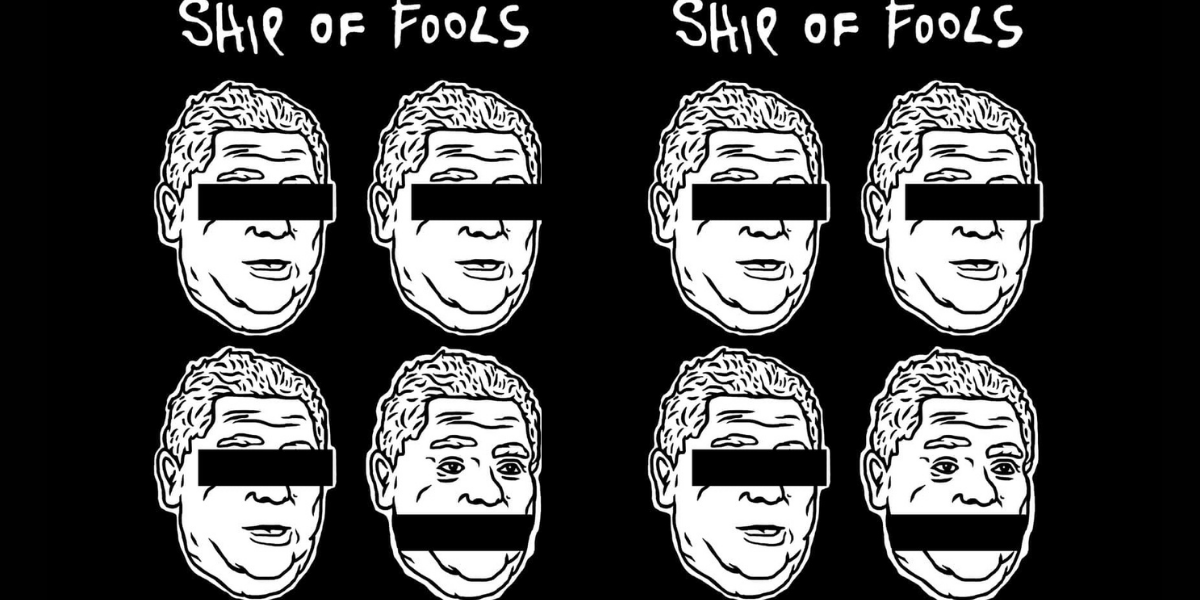 From a recent EP release to Doug Ford and tour plans, Ship of Fools have kept busy with their own brand of melodic hardcore. Spring Magazine had a chance to talk with vocalist, Andrew Yeo about Covid, Ontario, and their latest EP.

Where did you all meet? How was Ship of Fools formed? Does the name come from the Fucked Up song?

Niall, Greg and I all went to the same high school. I am a year older than both, but I got to know Niall more personally through his older brother who was in my grade. About 4 years after high school ended, Niall and I reconnected as friends and decided to try and put something together and play some music. He was playing drums in a metalcore band at the time and I just wanted to play guitar in a band. We had a few different bassists and a drummer join us at the beginning, but we couldn’t really get things going. Our drummer at the time wasn’t really into what we were doing, so our friend John joined the band on drums, followed by our buddy Jesse on bass. We recorded and released our first EP together called “Old Scars.” Shortly after that, John quit the band, and thankfully we were able to connect with Greg, who joined the band and added a whole new element to previously written & new songs. We released our EP “Broken Knuckles” in 2015 and about two years later Jesse left the band. We knew Chris from going to shows back in the mid 2000s, so we asked him to join the band. That’s the lineup you see today!

At the beginning of the band I was having a really hard time trying to put a band name together. I think I even got to the point of reading random signs on the road to see if it would fit. I believe “Self Storage” was the closest I got to a name with that approach, haha. Fucked Up’s ‘David Come To Life’ was heavy in rotation at that time and ‘Ship of Fools’ had a nice ring to it. I’ve always hated that we took the name from that song, as I always thought it was super cheesy, haha. But as we’ve grown as a band, Fucked Up still is a massive influence on us, and I feel like we’ve made the name our own.

What sort of specific influences, both lyrically and musically, do you draw from?

It’s actually funny, because collectively we only all like one band, who is Propagandhi. We all have different influences in our own way with our own instruments. For example, Niall comes from a more metal background and one of his biggest influences is Protest the Hero. Greg and Chris have more of an old school, skate punk influence. Personally for me, I take influence lyrically from bands like Idles.

Your latest EP, Status Quo, released in April of this year. First off, it sounds awesome! Secondly, you’re definitely taking shots on this album, not just at capitalism and the system, but specifically Doug Ford. Let’s talk about your pal, shall we?

Oh, Ontario’s fearless leader!? It’s actually interesting because prior to this release we never really wrote about politics or the social climate. Our songs were generally about mental health, addictions, ect, so they were a bit ‘darker.’ Upon Dougie’s election, I was seething at the fact that this man had absolutely no platform and only had the interests of the wealthy at hand. His cuts to healthcare and schools are criminal, and we’re paying for his negligence now.

The lyrics in ‘Open for Business’ certainly take aim at Ford again catering to corporations and not people. You talk about the importance of education, defunding the police, the need for affordable housing, even his buck-a-beer campaign!

Ultimately when writing this song, I wanted to pick out the points of his “campaign” and compare them to the things that really matter, like affordable housing, education and healthcare. This man rode the Buck-a-Beer & the’ A Place To Grow’ license plates instead of focusing on what people in this province really need. It was an easy way to get votes his way. As Covid hit, we’ve seen his poor decisions become more amplified and because of his ego, he passes the buck or avoids all conversations about what needs to be addressed. We all know what has happened the last four years down in the States, and from the outside looking in, it all seemed so surreal. Yet here we are in Ontario, dealing with our own egotistical ‘leader’ who all but denies any accountability of the poor decisions he’s made and continues to make. It sounds all too familiar.

The song ends on a high note “But I’ll stand with all my neighbors / And I’ll fight for my Ontario.” What is your Ontario?

I’m not blind to the fact that the economy needs to be a well oiled machine to keep our provincial government from going into deficit. When I speak of “My Ontario” I think of jobs for the unemployed, living wages, more funding into schools and special needs programs. I think of a reformed policing system, because what we have right now does not work, and will continue to fail the very people it is supposed to serve and protect. It really goes back to the old saying of “treat others the way you would like to be treated.” If we had more people employed, more funding into mental health services, ect we would see growth in the economy. Taxing the wealthy would fill the gaps of the cuts that have been made to our communities. This system continues to rinse and repeat itself, so why not demand change? Why not hold the small amount of small minded people in charge of our well-being accountable!? Something’s got to give.

And going to the EP as a whole, what was it like to work with both Greg Hounsell of Brutal Youth and Scott Middleton of Cancer Bats? How did Covid change the recording process?

We became friends with Brutal Youth a few years ago & I’ve always held them in high regard as one of Toronto’s best bands. Greg reached out to us a few years ago about working with us after we released our first LP “A Perfect Place for Harmony.” We had these songs well rehearsed and initially planned on recording them in the spring of 2020. Obviously, Covid happened, so we sat on them and continued to work on our second LP while in lockdown. Once restrictions eased up and we were able to have practice again, we worked at finalizing the songs and were able to head into the studio in October. I should mention, that when I say studio I mean a small jam space in Toronto, haha. The room was so small, but it made the drums sound so big. Greg really knows how to find our sound and is a perfectionist in the process. I would highly recommend working with him if you get the opportunity. We reached out to Scott to see if he would master the EP and he was great to work with. We actually hope to work with him more in the future.

And I can imagine you can’t wait until you get a chance to play these songs live, what do you think shows will look like when they’re open again?

At this point, our biggest priority is the safety of others. As much as I would love to hit the road now, I hope that measures are successful and will protect people who make their way out to shows. I do think shows will be much better though. Sure there may be some restrictions, especially at the beginning, but I think people’s need for live music is so huge. I don’t think too many bands will be playing to empty rooms over the next couple of years. I hope that people get out and support bands once they’re able to, because artists need as much support as possible after all of this.

While some might only know New Market for Jim Carrey and Glass Tiger, it’s got quite a lively punk scene. What are some of the bands and venues that you can’t wait to get back to and see?

The Newmarket punk scene is the best punk scene in Ontario. I cannot stress this enough. I’ve never met so many like minded, wonderful people, who really exemplify what it looks like to support your local punk scene. Bands like The Readys, who really helped us out when we first started, have become some of our best buds. Newmarket has some great bands like Razorbath, Letterbomb & Green Light District, but I also have to give a huge shoutout to bands like The Highdives and Heavy Petter who travel down from Barrie for most Newmarket shows.

Right now you can pick up the new EP digitally, any plans on physical releases?

Oh yeah! We will be releasing it very soon on 7” vinyl, as well as some new merch to go with it, so hopefully people will enjoy the merch packages we will be offering. Pre-order will be available soon!

And lastly, what’s next for Ship of Fools?

I think right now, since we’re in a stay-at-home order, we are just excited to get into the garage again and jam. We are continually working on our second LP. However, I think priority number one will be making sure our songs and set are ready to go as soon as things open up again. Before Covid hit, we had shows with Cancer Bats and Strung Out cancelled, so hopefully those are rescheduled. In the meantime, we just want to get “Status Quo” into people’s ears. Hopefully people like it.

It’s late at night and you’ve just finished a gig in whatever mental state you might be in. All that’s open is a 7-11 or similar convenience store. You grab something to drink, something salty, and something sweet. What do you get?

In Ontario we have On-Routes, which are service stations along some of our highways. They usually have a Tim Hortons and a KFC or something. The ones that have a Burger King are usually stopped at. I can speak for myself in saying I can’t consume BK anymore, it makes me sick, but the guys love it. Even if we’re not really in the mood, it’s almost become a tradition to make a BK stop. My stomach is off thinking about it. Other than that, if a late night gas station has a Tim Hortons, I’m usually grabbing a steeped tea. I don’t really have much of a sweet tooth, haha.