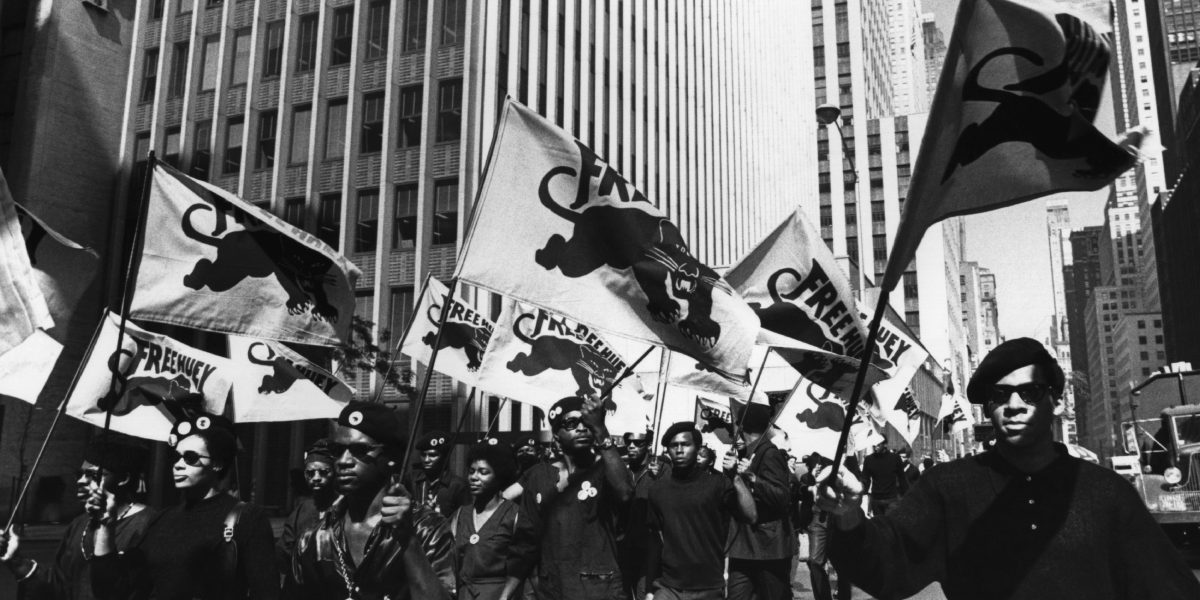 Hilliard writes candidly about growing up in Alabama and his first encounters with activism and survival strategies; lessons learned from his family in hard work, perseverance, community, solidarity and defiance in the face of truly dreadful poverty and racism. His family eventually moved to California where Hilliard met his childhood friend and eventual leader of the BPP, Huey Newton.

This Side of Glory takes the reader on Hilliard’s attempts to feed his young family, working various jobs, but finding only frustration with racism and low-wages, turning to alcohol and street violence before eventually joining the BPP and finding in that a purpose for his life and a vessel to channel his anger into political activism.

Rise of the Panthers

The party started off modestly–Newton, Hilliard and few others went out on patrols, armed with shotguns, trying to stop police from harassing black people in their neighbourhoods. But amidst the civil rights movements, riots and protests of the 60s, the BPP grew quickly and began to make concrete its political vision for black people in America. The party really began to take off when Newton was arrested for killing a police officer and the party launched an incredibly bold and popular campaign to free him. Their work continued to grow during this period as the Oakland BPP opened community food banks, health care clinics, and really campaigned hard on their 10 point program which emphasized housing, health care, and an end to war, exploitation and police violence.

What becomes very clear throughout Hilliard’s story is that the vision that began in Oakland was one of socialism, internationalism and Black Nationalism. However, this was not the Black Nationalism of the Nation of Islam or the countless other groups using that title. As leading BPP member, Bobby Hutton says: “we’re nationalists, because we see ourselves as a nation within a nation. But we’re revolutionary nationalists. We don’t see ourselves as a national unit for racist reasons but as a necessity for us to progress as human beings and live on the face of this earth. We don’t fight racism with racism. We fight racism with solidarity. We don’t fight exploitative capitalism with black capitalism. We fight capitalism with revolutionary socialism.”The BPP was leading the argument in activist circles that radicals of all races, religions, sexual orientations and genders had to come together to fight oppression and exploitation. Through their newspaper, TheBlack Panther, they organized thousands of people into political activity. A paper sale would be the most exciting thing some of the neighbourhoods they sold in had ever seen, and became a way for the party to grow beyond the confines of West Oakland. TheBlack Panther had a readership of 250,000 at its peak and the BPP could claim 10,000 members in 1969.

Decline of the Panthers

However, in many ways the BPP would come to be undermined by their own success. As they grew quickly in the revolutionary atmosphere of the 1960s, branches began to pop up all over the country that did not have the same vision as the Oakland founders. Many chapters committed crimes and allowed sexism to continue within their organizations, things that were anathema to the foundation of the BPP. Charismatic and confident leaders could right the party in times of trouble, but Hilliard paints the picture of a party that was unable to argue against its leaders and make decisions outside of the few top figures. This lack of democracy and accountability would later wind up landing Hilliard in jail and Hutton dead. In addition, the fast paced recruitment and pace of activity allowed the scores of FBI spies and provocateurs (backed by millions in government-funding) to infiltrate and undermine the work of the BPP.

The incredible campaign of police harassment, espionage, entrapment and even murder divided and weakened the party. Hilliard was sent to jail after an ill-advised attempt to ambush Oakland police in protest of Martin Luther King’s assassination ended in disaster. While in jail, he saw the party succumb to the whims of a newly-freed Huey P. Newton who turned to extortion, drug dealing and used the party to fashion his own brand of black capitalism.

What is stark about Hilliard’s story is the bleak results of the US government’s violent suppression of the BPP and protest movements of the 60s. After getting out of jail, Hilliard was startled by the lack of political activity, the absence of community and the nihilism of the streets of America that had gone years without the politics of hope of the Panthers and the anti-war movement; meanwhile Reagan did his best to beat the labour movement into submission. Hilliard’s comments on the young men on the streets, underscore the importance of revolutionary organizations and social movements to offer some kind of alternative to the nihilistic individualism that exists in the darkest corners of the capitalist system: “What happened here? I think. Twenty years ago these guys would have been panthers. Now they’re violent, undisciplined, apolitical, fratricidal maniacs.”

There are far too many incredible stories and lessons from this book to relate in a little book review. Hilliard paints a vivid picture of a party that was able to mobilize people around calls for bread and butter, but inspire them to demand so much more. He demonstrates the vicious nature of the state when faced with a challenge from the grassroots, and has left an incredible document for those struggling with how to make social change today.