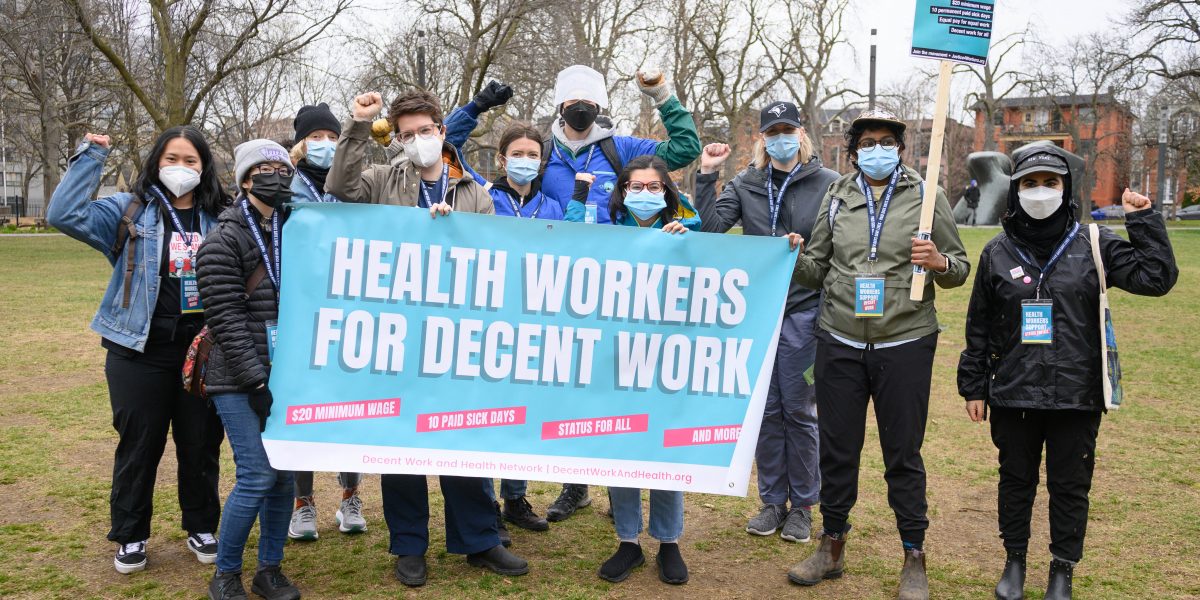 I’ll cut straight to the chase – Ontario still does not have permanent paid sick days. Zero. After a devastating pandemic with thousands of deaths, still NO paid sick days.

When the pandemic started, it was right after Doug Ford canceled Ontario’s 2 permanent paid sick days, the effect of which we saw right away during the early waves of the pandemic; and the effects of which we are still seeing today as patients flood ER rooms and hospitals with preventable diseases.

Just last week a report in the Toronto Star revealed that hospitals in Ontario were forced to close 80 times during summertime – that’s over 1700 hours of inaccessible emergency medicine!

This is the task at hand for the provincial government. Workers in Ontario are being failed by inadequate health policies.

Recent research showed that jurisdictions that adapted mandated paid sick days saw a decrease in mortality rate between 3%-10%!! Even one extra hour of paid sick leave was associated with a measurable decrease in mortality from suicide, homicide & alcohol poisoning. The same study also calculated that there were four specific counties in the U.S. where the mortality rates would have been 7.5% lower in working-age adults in 2019 if state laws hadn’t blocked attempts to mandate paid sick leave.

This goes on to highlight just how harmful canceling paid sick days is to workers’ lives.Doug Ford has canceled paid sick days once before and he is set to cancel them again in March 2023 when the Worker Income Protection Benefit is set to expire.

Moreover, instead of actually listening to the health evidence and offering workers with permanent protections, what this government did was remove mandatory 5-day isolation right before the new school term started. This will likely increase infection rates and negatively impact workers in precarious jobs, many of whom are racialized. Again and again, it is racialized workers who are bearing the brunt of the pandemic.

The province’s approach to our health is as if the pandemic has ended but not everyone can afford to just brush off the pandemic. Doctors, nurses, PSWs, were on the front line providing care for patients who couldn’t stay home and recover without paid sick days. The whole pandemic was proof that without paid sick days, workers will suffer. And yet this government’s only response has been to extend their temporary and inadequate three paid sick days for a period of over 700 days!!!

It’s outrageous. Paid sick days are not a controversial issue – there is universal support  on this and from ALL opposition parties in Ontario.

Right now, there is a crucial window to make paid sick days into a permanent law. The NDP has tabled Bill 4, Stay Home if You Are Sick Act, 2022 which would provide all workers in Ontario with 10 permanent paid sick days and 14 additional days during public health emergencies. And this because of OUR organizing.

The Liberals and Greens have expressed support for 10 paid sick days which means the only one blocking this bill from becoming the law are the Conservatives. Premier Ford and his government have voted down paid sick days over 27 times. We have to make sure that they do not repeat the same mistakes.

Bill 4 will be debated and voted at the end of November which means, from now till mid-Nov is a key moment to mobilize and increase the pressure on this government so they listen to the science, and finally implement 10 paid sick days.

In the next few weeks, what we really need to do is get our communities together to send a strong signal to ALL MPPs that there is no option BUT to legislate paid sick days. That means we need to get involved in activities and outreach in our local neighborhoods and networks. This is the moment to push harder and keep pushing until we win. It’s possible because we have done it before and we know it can be done again!

Join an outreach near you to talk to your community about paid sick days.