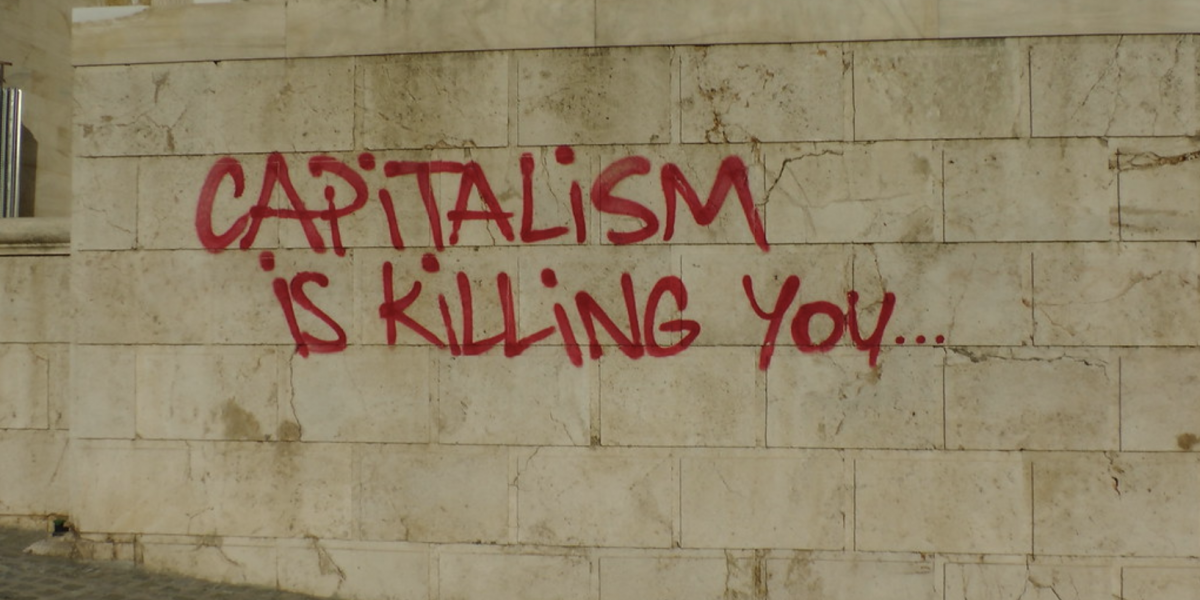 In response to the COVID-19 pandemic, socialists insist that “Capitalism is the Virus!” Such a phrase is not a casual flip of the script or a ‘what-about-ism’. Popular discourse surrounding virology (and epidemiology) simply accounts for capitalist rhetoric. Neo-liberals apply concepts of natural selection and “survival of the fittest” to viruses, to humans, to businesses, to ideas, and to our capitalist economy. By picking at these threads, the slogan — capitalism is the virus — becomes more analytical. Simultaneously, we critique capitalism by highlighting how the material conditions it fosters prompt pandemics and how the solution is socialism.

Throughout history, viruses and bacteria — tuberculosis, pneumonia, small pox, polio, measles, influenza, cholera, etc. — killed more humans than anything else. It is only recently, in the last 50 to 100 years, that chronic diseases like cancer and heart disease killed more people than infectious diseases in the global North, and life expectancy has soared from around 50 years to 80 years of age. This dramatic shift is commonly attributed to scientific and technological advances, like the discovery of antibiotics, which entered clinical practice in 1942, and widespread vaccination programs that became common around the same time. By extension, these advances are credited to capitalism, the “free market of ideas,” and competition between corporations for profit. Although a tempting hypothesis, this relationship is not borne out in the data.

The decline of infectious disease in the global North

Mortality due to tuberculosis already declined a full 90% from its peak in the mid-1800s before effective antibiotics entered clinical usage. Measles killed fewer and fewer people despite no change in incidence level before an effective vaccine in the 1960s caused the number of cases to plummet. So, what was the cause of the decrease in infectious disease mortality in the years leading up to effective treatment and vaccines? Thomas McKeown, epidemiologist and historian of medicine, put forth a thesis in the 1960s that argues that increases in population in the 1800s resulted from increases in nutrition due to improving economic conditions. This idea has since gained significant traction.

What brought about improved nutrition? The industrial revolution, associated with more efficient agriculture and increased wealth generation, was necessary. Importantly, it was not sufficient. The first wave of the industrial revolution in mid-1700s no doubt increased wealth for the ruling class in the Global North—fuelled by slavery and colonization of the Global South. But, for the working class of the Global North, the industrial revolution produced the crowded impoverished cities that spread tuberculosis. It took at least 50 years before the working class gained any significant increase in wages and living conditions. Why did wages increase? It is not a law of capitalism that real wages for the working class increase over time. Quite the opposite. As rates of profit fall due to competition, workers get squeezed one way or another (by outsourcing, automation, stagnating wages, layoffs, slashed benefits). Instead, workers organized unions, fought for better wages, safer working conditions, and more democratic control. Mass organization, general strikes, and militancy redistributed some of the massive wealth accumulated in the early capitalist system. The resultant improvement in proletarian living conditions fostered resilience to pestilence and increased life expectancy in the Global North, while colonization continued to fuel so-called “tropical diseases” in the Global South world.

Today, the connection between poverty and mortality — the social determinants of health — is taught in medical school. But, the relentless austerity endemic in the capitalist system, necessary to combat declines in the rate of profit and to keep the capitalist machine humming along, promotes and maintains the poverty and malnutrition that makes people susceptible to both infectious and chronic diseases.

This is not the only way capitalism is a virus. The profit-motive led companies to bury internal studies linking a diet high in sugar with diabetes, smoking cigarettes with lung cancer, and industrial carcinogens with multiple forms of cancer. Instead, corporate-funded think tanks and industry groups obfuscated and lobbied against regulation. The pandemics of lung cancer, mesothelioma, other environmentally-linked cancers, and diabetes, so-called “diseases of old age”, would have been largely mitigated if profit did not factor into the equation. Similarly, the most pressing emergency in the world of microbiology, antibacterial resistance, springs from the bowels of capitalism.

Although a redistribution of wealth decreased mortality from bacterial infections well before antibiotics were discovered, the new medications did save lives. However, pharmaceutical companies quickly obtained patents and aggressively marketed antibiotics. This essential medicine could be found in tooth paste, gum, and lipstick. Pharmaceutical companies lobbied doctors to prescribe their new antibiotic. Worse, antibiotics became entrenched in industrial agricultural practices, where they are commonly added to feed to promote animal growth. Unnecessary usage of antibiotics, driven by profit, selected for resistant microbes, and now antibacterial resistance kills an estimated 700,000 people a year. If we do nothing to address this crisis, it is predicted that resistant microbes will kill 10 million people annually, some 400,000 in Canada, by 2050.

While humanity suffers, is Big Pharma re-doubling efforts to save us? Not a chance.  Despite the pressing danger of antimicrobial resistance, company after company is shuttering their antimicrobial drug pipeline. Only four of the top 50 pharmaceutical companies, by sales, operate an active antimicrobial drug discovery pipeline. Why? It is not profitable. Short courses of antibiotics for acute infections, or the development of vaccines for unpredictable pandemics, are not as profitable as lifetime treatments for chronic diseases like diabetes or heart disease. This is not a conspiracy; these companies are very open about it.

A rule of capitalism is that short-term profits are better than long-term losses. There is no purifying selection in capitalism that roots out companies that place human survival in peril.  Just the opposite. More profit is to be had from slashing workers’ benefits, selling antibiotics for animal feed, funding disinformation groups, and selling addictive and harmful products. In the pharmaceutical industry, the bigger a company gets, the less it spends on R&D — and the more it spends on lobbying. That is how they increase profit. Not by developing new drugs that help people, but by increasing market share and getting doctors to prescribe their costlier medication instead of other alternatives. The profit motive also rules the carbon sector, which is why catastrophic climate change is driving humanity to the brink of extinction. This is why life expectancy in the US is actually now decreasing. The gains of past working class struggles are being erased.

What is the solution? Socialism. Just like mass mobilization led to real material gains for the working class in the 1800s, which directly led to improved nutrition and less death due to pestilence, it’s time to rise up around the world, reclaim our industries and put them to work for us, not for the capitalists who leech off social production. We can learn from the shortcomings of past movements. History teaches that simply relying on legislation or on the reform of capitalism results only in temporary wins, which are restricted by borders and maintain the colonial and capitalist state responsible for global poverty and its pandemics. In capitalist society, the ruling class controls the means of production, but what they lack is a superiority in numbers.

That’s why it is vital to mobilize masses with the vision of workers’ control and workers’ democracy in mind—for workers of the world to unite. When the moment comes, and with many capitalist catastrophes on the horizon it may be soon, we seek to elevate the working class to the role of rulers of society.  It is absurd to expect capitalists to play politely — to put the interests of the vast majority first. Have no illusions in phony class alliance with them. Capitalism is the virus. We must inoculate ourselves against corporate propaganda and wipe the system of exploitation and oppression off the face of the earth.