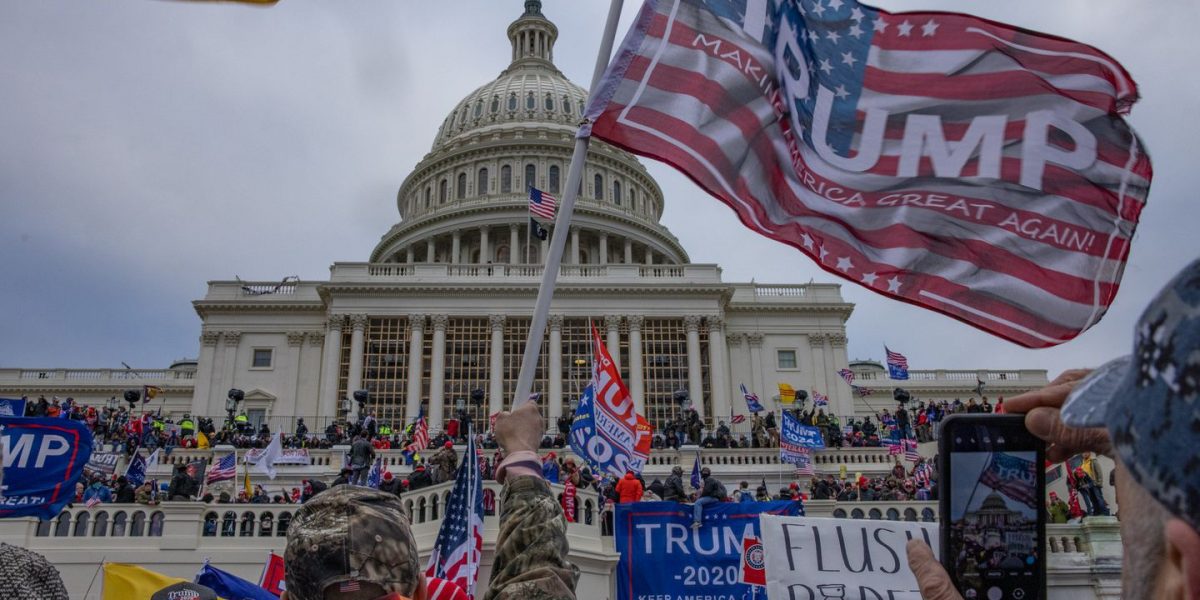 My mum texted me saying, “I’m watching the horrific events unfold in DC”. My mind immediately jumped to, “Oh no, not another Black life taken by police”. Then I turn on the TV and see, oh wait, white supremacists taking a field trip into the Capitol.

Black people and other people of colour cannot walk down the street without the fear of being shot dead, or in the case of Breonna Taylor, sleep in their own home. Jacob Blake, now paralyzed, was shot by an officer seven times getting into his car while his three children were in the backseat. George Floyd was choked to death by a police officer’s knee in broad daylight. Taylor was shot eight times and killed by police in her own home. And the list continues, every year.

Then you have a gaggle of goons clad in Trump attire, hailing confederate and American flags, wearing civil war shirts adorned with the date, storming the Capitol, sitting in the House Speaker’s chair, in Nancy Pelosi’s office – with little to no resistance from the state police. They’re trying to take what they think is theirs – and to a certain extent, it is. This president (no capital) has convinced them this is their country; one that has been stolen from them. He has stoked their disenfranchised fire and fanned the flames of their bigotry towards those they’ve been raised to hate.

It was like Trump invited and incited them to take a day trip into the Capitol, with the police was their guide. “I know you pay a membership here but please don’t break that; we like our windows and doors here.” “Oh, okay, you did. Well, we’re going to have to ask you to leave. And well, please don’t take Nancy Pelosi’s mail as a souvenir. But sure, you can have a selfie.”

We now know police fired some bullets and released tear gas, and five people have now died in the chaos. One death was from an attack on a police officer, leaving many to question why the national guard was not called in. Because we know that would be the case if those storming the Capitol were people of colour: we saw the national guard deployed to the Lincoln Memorial in droves during the protest over the death of George Floyd. Had the same protests stormed the Capitol, we would see police brutality and dead bodies in the streets. Words like “riot”, “siege”, “infiltrate” would be used instead of “protests”. The media is slowly backtracking on the word “protest”, but not fast enough for it to be forgiven.

Twitter chose a wire service photo of a Black police officer on a headline about the woman dying after being shot at the Capitol. The original Reuters photo was taken to illustrate a police officer shooting pepper spray at a protestor – not bullets. This is all part of the racist teachings.

And for goodness sake, could the media please stop comparing the US to so-called “third world countries”? It’s insulting to other countries who have things like a proper healthcare system for their citizens, that don’t use prisoners as slave labour, that respect democratic voting processes, or that don’t equip their citizens with guns. It is also exactly what the US does to developing countries – incites and supports right wing coup d’états.

If this sounds personal, it is. My dad “deserted” the US over fifty years ago. I love my relatives there, but I am so thankful he gave up that membership because he didn’t want to murder Vietnamese people and children in the name of the state. People also need to give up the idea that the “Greatest country in the world” has fallen. This is America – it has never risen past a racist killing machine.