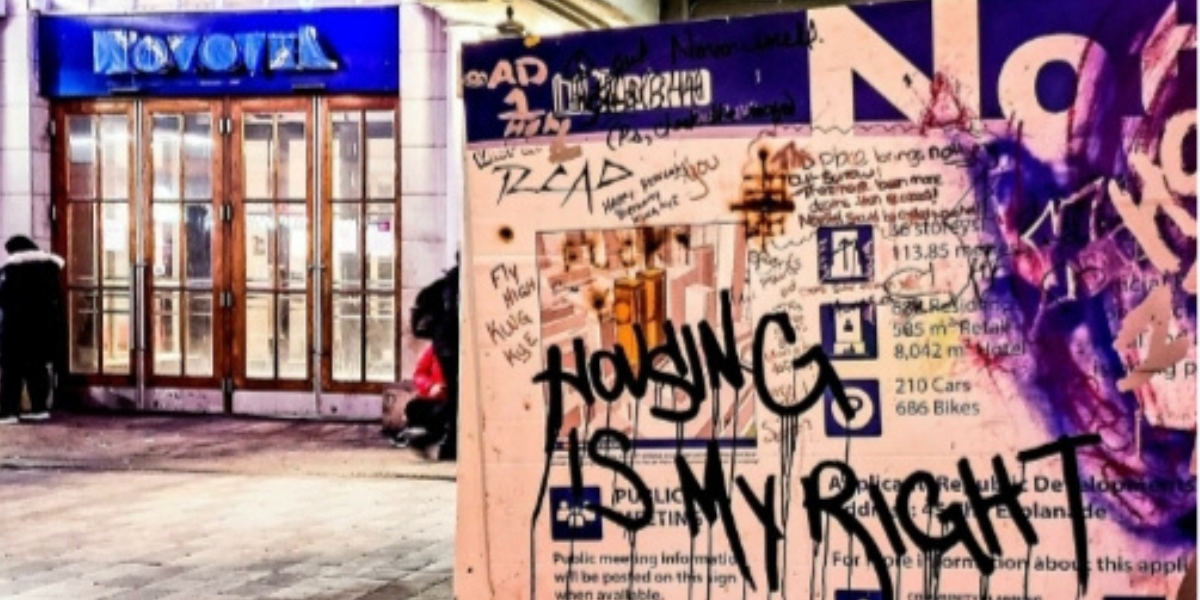 I am a frontline community health worker directly supporting unhoused folks and the larger community most impacted by the violence of capitalism. I have worked on the frontline through the entire pandemic and have witnessed mass amounts of systemic violence, trauma, and death.

Rising rents and rules that favour developers precipitated the immediate crisis, but the shelter system in Toronto has been in crisis for years. It is increasingly difficult to find any available spaces, even in emergency violence against women (VAW) spaces. Many unhoused people decided to live in outdoor encampments instead of shelters where covid outbreaks were common. People felt safer in the outdoors, away from the punitive rules and restrictions on their personal liberty. People congregated in specific areas of the city where there are more services to support them. Park encampments sprung up in these areas, referred to by residents as Tent City.

The shelter system serves approximately 8600 people a night. The city data shows that an average of 40 people were turned away from shelters each night in the past year and a half. As a frontline worker, I can attest that this number is dramatically low. This number is recorded from the data of people who call central intake to find a shelter bed. The number of people sleeping outside is much higher: many unhoused people don’t bother calling for a bed most nights because they know there isn’t any space.

Approximately six months into the pandemic, the city of Toronto finally offered hotel spaces as temporary shelter for those living on the streets to avoid community spread. There also was, and still is, hotels specifically for those with positive COVID-19 infections to stay if they have no place to self-isolate. When the shelter hotels became available, many people were suspicious of the city’s intentions. Due to long histories of institutional violence, including incarceration and medicalized-psychiatric violence, it took a long time for many people to accept these rooms in hotels, even in the harsh winter. When some people finally agreed, many were shipped out on buses to hotels in other areas of the city, many far away from their community and the resources and services they rely on (social services, doctors and other medical services). Those that refused to move were threatened by the city, harassed by police, and had their belongings and tents trashed and thrown out by city workers.

On top of being homeless, many were subjected to police harassment and violence. The City of Toronto sued a community member who was building temporary small, insulated shelters for unhoused people in the winter. It became a crime to help people not die from exposure on the grounds of the “property rights” of the city, intentionally forgetting that this city is built on stolen Indigenous land.

In the experience of many community members and the staff that support them, the shelter hotels were horrible from the start. People who sought refuge in shelter hotels were treated like they were serving a jail sentence as the city enforced strict curfews on adults. Community members faced evictions back onto the streets for the most marginal reasons like using illicit drugs. The staff hired to work in these hotels were not trained in social service work or any related field. Anyone following the opioid epidemic knows the centrality of overdose training, but the staff hired to work in these hotels lacked basic training in overdose response.

The abstinence enforced in the hotel are not only short-sighted, they can also have deadly consequences. People will continue to use drugs despite these rules, and a combination of regressive policies, stigma, and an untrained staff have caused countless deaths in these hotels, and the shelter system itself. In 2021, there were 1496 suspected overdoses in the shelter system, 83 of which were fatal. This is a massive increase from 2020 with 808 suspected overdoses, 53 of which were fatal. So far in 2022, there have been 720 suspected overdoses and 48 fatal overdoses. These deaths are inexcusable and entirely preventable.

After almost two years of being in these shelters, the City of Toronto has shut down the program at Novotel and is in the works to shut down the rest of the program. The City claims that people have been given workers to help move people into transitional housing or “other shelters.” While this sounds encouraging, most of these statements are misleading at best, and more often are downright lies. From first hand experience I have seen a number of people kicked out of these hotels with only a few hours notice, some with only a few minutes to gather their belongings, those not able to gather all their belongings had what they left behind trashed. Many people never heard from a worker to help them through the transition, while others waited around to be transferred and never had any worker show up to take them to another hotel.

After being ‘housed’ for over a year, many people are now homeless again in winter, which is especially cruel. My co-workers and I have been calling the hotels, shelters, and Streets2Homes (an organization that is supposed to house people) with no answers. Often we are told that certain people – those who have been living in the hotels – do not exist on the records. Sometimes we are told they missed intake and therefore don’t get another chance. Often, multiple housing organizations pass the blame onto other organizations. They often do not work together to support people. Recently, activists have uncovered that Toronto Public Health has advised the city in June to keep the shelter hotels open until at least the end of 2023. The city ignored public health experts, and opted to evict residents onto the street in the winter. Toronto’s shelter system is intentionally broken, compartmentalized, and individualized. It doesn’t work for those in need and was never meant to.

Fighting on the frontlines

But let me be clear: I am not blaming frontline workers for the crisis. Many of us are experiencing extreme burnout from navigating a cruel and unjust system and experiencing the second hand trauma that comes from witnessing such violence. It is difficult to continue to see suffering en mass daily and not be able to do much to support people. We are working against massive systems of injustice and oppression. In many cases, we are mediating the cruelty of the system. On top of this, many of us have had to deal with the constant stream of deaths from the homelessness and opioid crisis. There is very little support for the frontline workers who are expected to individually “self-care” our way through the crisis. Many social services are a bandaid for the larger problems produced by the on-going cruelties of colonialism and capitalism. Social services are like the release point of a boiling kettle. Without them, the problem may explode, but social services were never designed to address the root of the problem.

The answer was never temporary shelters or hotels. The solution is housing for all–not armed riot police, not evictions, not abandoning people on the streets in the middle of the winter.

If we want to change the current situation, those of us in social services need to organize. This is difficult given the high levels of burnout, but it is essential for not only our own well being, but for the well being and future of our clients, and those most impacted by the system. As socialists, the needs of unhoused people and those living in poverty need to be on our radar. We need to support the organizing of those living in poverty. Social workers and others working in social services also need our organizing support. Building solidarity with those in social services is essential to help with the extreme burnout and organizing abilities.

As of November, 2022 has seen 103 deaths total in the shelter system. In 2021, 221 people experiencing homelessness died in Toronto, most of which were preventable. The statistics are staggering and unacceptable because housing is a human right.

Each of these deaths represents more than a number. Each death represents a person, a human being abandoned by this city, a member of our community taken from us by this capitalist nightmare. Each death compels us to support the organizing of unhoused people and organize ourselves too.