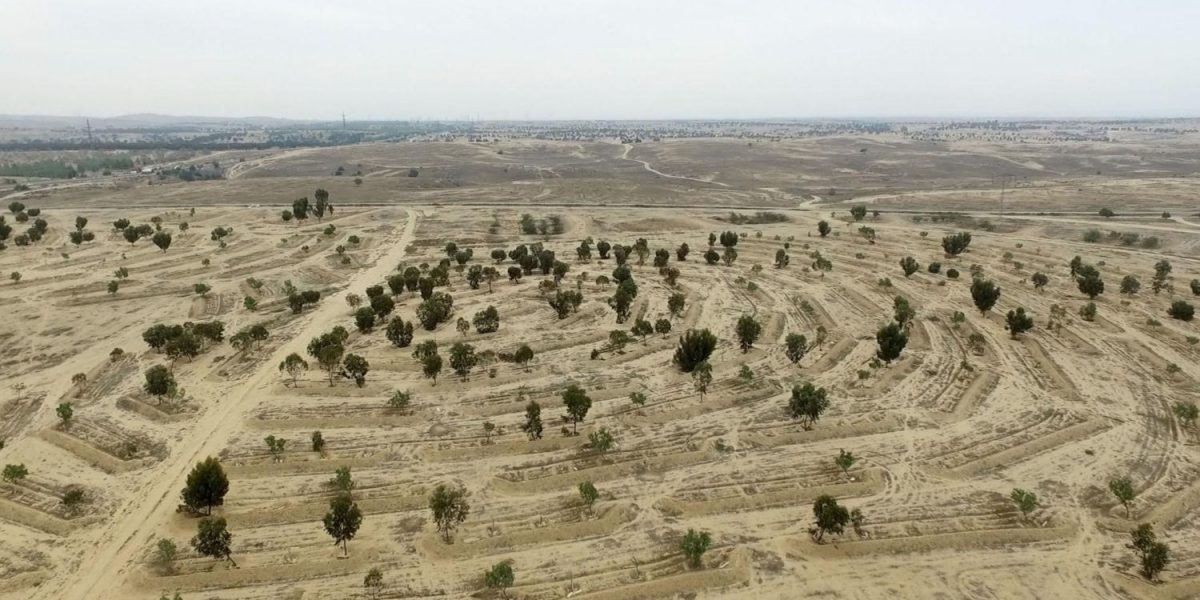 In Palestine, settler-colonialism often appears overt and explicit, as with the demolition and ethnic cleansing of Palestinian towns and neighborhoods like Sheikh Jarrah and Silwan. At the same time, Israel deploys more subtle, sinister forms of erasure, attempting to replace the culture and geography of Palestine with a reimagined Zionist “homeland” so that even the land itself becomes physically unrecognizable to its Indigenous inhabitants. The Israeli state practice of destroying Indigenous flora and fauna and replacing them with foreign specimens is one aspect of such greenwashing efforts.

Greenwashing refers to the ongoing practices of appealing to environmentalism, while maintaining acts of violence upon certain communities and peoples. The Israeli state and the Jewish National Fund (JNF) facilitate greenwashing efforts, uprooting and replacing endemic habitats across all of Occupied Palestine, and with a particular focus on Al-Naqab in recent months. The JNF’s influence in this regard cannot be underestimated: the organization owns and maintains 13 percent of all stolen Palestinian land. By planting trees atop Indigenous villages, uprooting endemic agriculture, and blocking Palestinians’ access to extremely scarce water sources, the JNF continues to play a key role in the uprooting and desecration of Palestinian land and livelihoods.

Trees as a colonial weapon

For years, the JNF has planted hundreds of pine trees across Palestine that are not Indigenous to the Levant. For example, after the Palestinian al-Tira village was completely demolished by Israeli occupation forces, the JNF planted hundreds of pine trees to conceal the dispossession of Palestinians and built the Carmel National Park in its place, which remains Israel’s largest national park. Non- indigenous pine trees were ill-suited to the natural Palestinian environment and have killed off many other native plants in their vicinity. The establishment of Israeli national parks began through uprooting the natural vegetation of olives and fruit trees. By planting pine trees, the JNF rendered Palestine’s natural environment highly vulnerable to ecocide and habitat destruction, as pine trees killed nearly all surrounding flora due to their high acidity level.

Canada Park, located in the West Bank, is another site designated as an Israeli national park that the JNF constructed only after the Zionist army demolished villages in the area. Once the land was cleared, the JNF replanted a recreational forest over the remains of Palestinian homes. In total, the JNF and Israeli state have uprooted more than 160,000 olive trees to build these artificial forests. The loss of so many olive trees is not only a tragic for their symbolic power as emblems of Palestinian culture and geography: it is also a devastating loss for Palestinian farmers, thousands of whom have had their main source of agriculture and income taken from them.

In Al-Naqab, Palestinian Bedouin houses are systematically destroyed at a fixed pace to provide increased access to land for Israeli agriculture. Palestinian Bedouins in Al-Naqab, who maintain the land for their livelihoods, have resisted ethnic cleansing for decades while simultaneously reckoning with their almost complete lack of a feasible local economy to sustain themselves as a result of the occupation. There are over 40 Palestinian Bedouin villages in Al-Naqab that are “unrecognized” by the settler state and as a result of their unincorporated status, are denied access to water, electricity, sewage, education, healthcare and roads.

In the past month Palestinian Bedouins in al-Naqab have been mounting resistance efforts to an accelerated campaign by the JNF to uproot and displace them from their homes. Protests in Al-Naqab have been ongoing for over 2 weeks and families in the villages are calling for a weekend of action on January 28 – January 30.

The JNF has charitable status in Canada and continues to operate despite the efforts of organizers to revoke its charitable status. The building of Canada Park was funded by JNF Canada and lies atop the ruins of three villages: Beit Nuba, Imwas, and Yalu. The villages of al-Araqeeb, Umm al-Hiran, and Silwan are all under immediate threat of being displaced by the JNF, despite ongoing resistance to forced expulsions and police raids.

Palestinian organizers globally are calling to revoke the charitable status of the JNF. There are ongoing calls to divest funds from the JNF to end its significant role in the ongoing ethnic cleansing of Palestinians. Join the call to action to #DefundtheJNF.

On Saturday, January 29, Tkaraonto/Toronto will hold a march in defense of Al-Naqab and in support of Palestinian resistance efforts to ongoing displacement and dispossession. The march will start at 2 PM from Yonge-Dundas Square to the Israeli Consulate. Come stand with Palestinians in our struggle against Zionist ethnic cleansing. Join us as we oppose greenwashing and take a stand against ongoing settler-colonialism in Palestine.