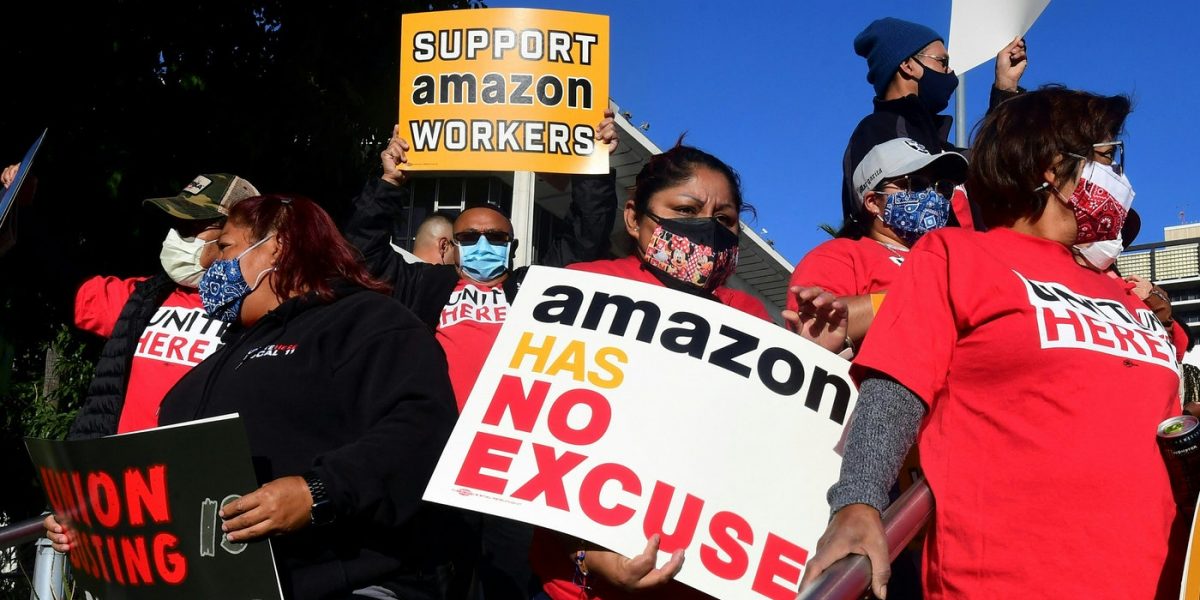 On April 1 ballot counting began to determine whether the 6,000 workers at the Amazon warehouse in Bessemer, Alabama will win union recognition. This is the first union vote faced by Amazon in the United States since 2014. A union victory in Alabama would boost the confidence of workers across the United States and the rest of the world. The lesson would be workers could take on one of the world’s biggest corporations and win.

The vote was the culmination of efforts by workers, local organizers and a shifting political climate around labour rights, inequality and Amazon. Years of campaigning by the Fight for $15 and vocal criticism of Amazon from political figures like Kshama Sawant, Bernie Sanders and Alexandria Ocasio-Cortez have shined a light on Amazon’s poor labour record and raised expectations of workers. The ground has shifted so much over the last year that even newly elected President Biden has come out in support of the union.

While labour unions have maintained popularity in Europe and other parts of the world, in the United States they have been in decline since the 1970s, today just over 6% of private sector workers are in unions. The reputation of unions and the advantages they present for the working class have been downplayed drastically with the rise of corporatism and anti-union rhetoric in America. Amazon has tried  to tap into this anti-union sentiment through its multifaceted disinformation campaigns. It is running anti-union ads on Twitch, YouTube and other social media platforms urging workers to vote “no” (so of these ads have been taken down). It has also hired pro-Amazon voices on social media, and utilized closed door meetings to talk about why workers don’t need a union.

Amazon’s public relations office also aims to reflect a “progressive” image of the company, constantly boasting their $15 minimum wage (which is a comparably low wage among other factory/warehouse workers), putting up ads in the newspaper to push for the $15 federal minimum wage and calling themselves an actual progressive workplace.

The reality for many workers at Amazon is quite different from the picture painted by Amazon’s corporate propaganda. As one worker recently noted about why they are supporting the union drive:

“We need change more than anything because they have to stop: the mistreatment of people, the favoritism, and just turning a blind eye to stuff. It’s all too much wrong going on there, but they wanna talk and harp about, “we’re paying this much amount and we’re offering these benefits.” But is it worth people losing their sanity though?”

In Canada, Amazon’s over 23,000 workers are not unionized. The company has been accused of firing workers who tried to unionize, ultimately violating the Employment Standards Act. Amazon has been known for their Orwellian work environment, consistently monitoring workers and their productivity to “avoid inefficiency” even preventing them from bathroom breaks. Workers’ who show up  five minutes late or don’t deliver packages fast enough can be subject to excessive wage or shift reduction. The management by stress approach used by Amazon has led to high employee turnover has only worsened during the pandemic, which is by some accounts is double other retailers.

Over the years Amazon’s unfair labour practices in Canada have emerged with a number of couriers/delivery drivers speaking out about the wrongful termination of employees (often those involved with unions), the closure of one courier company’s Mississauga operations in June 2019, that permanently laid off workers, and the bankruptcy of another courier.

As the UFCW pointed out in its lawsuit against the company, “Amazon has sent an unequivocal message to the courier drivers at its Scarborough and Mississauga distribution terminals that unionization equates to job loss.”

Amazon’s giant facilities in Canada have also been the subject of mass outbreaks of COVID. Just this past month Brampton public health officials had to close the Amazon facility, against the wishes of Amazon, because of a mass outbreak of COVID that saw up to 900 workers contract the virus. Workers described how the company is flaunting social distancing rules and how its worksites have become a major vector for the virus.

The post-pandemic world will be defined by who will have to pay for the crisis, workers or bosses. Amazon is a giant corporation, headed by one of the richest people on the planet. Its market share and profits have increased enormously over the course of the pandemic. These profits come from a highly exploited workforce, who have thus far been unable to win union recognition. If the workers in Bessemer, Alabama are able to defy Amazon and win a union this would be a beacon of hope for workers in the United States, Canada and beyond.