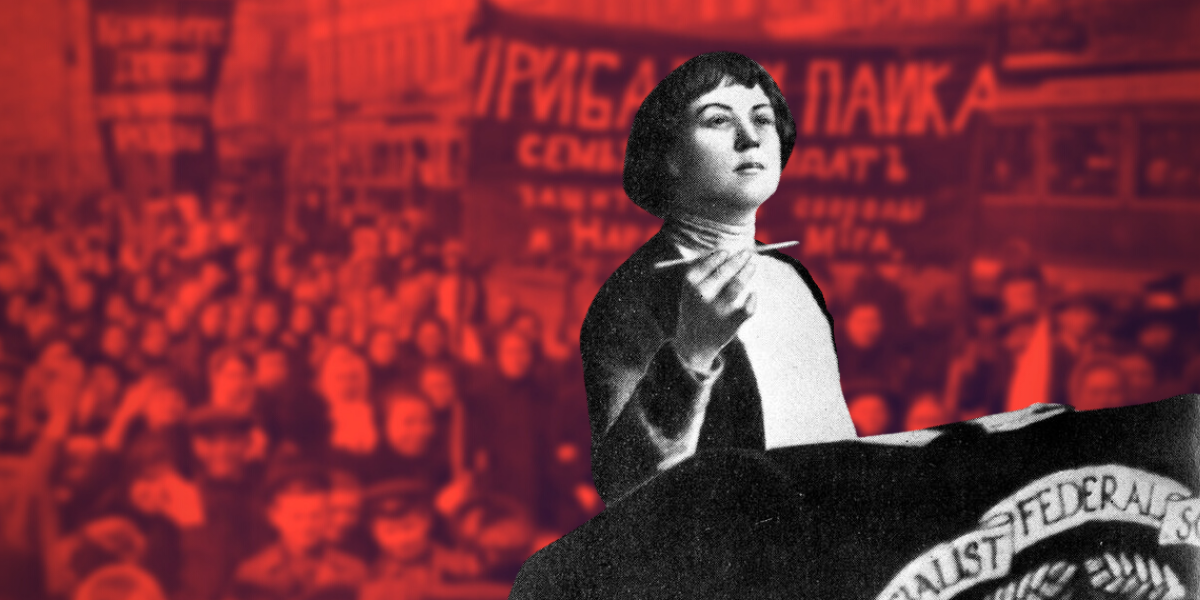 Alexandra Mikhailovna Kollontai, one of Russia’s most prominent socialists and revolutionaries, was born on March 31, 1872. Kollantai was a strong advocate for working class womens’ rights, the first female member of a governing cabinet, and the first female diplomat. Independent, both in her personal life and her political views, she believed that womens’ liberation was integral to the success of socialism.

Kollontai was born into a wealthy aristocratic family. A comfortable upbringing primed her for marriage to a wealthy aristocrat and a life of leisure, but she chose to break from her privileged background and forge her own path. Starting with her insistence on marrying for love rather than social position, Kollontai challenged social norms from an early age.

Yet she found that being the wife of Vladimir Kollontai and mother to their son was far from satisfying. According to her personal legend, a visit to workers’ housing at a textile factory in 1896 exposed her to the deplorable conditions in which most of Russia’s working class lived and opened her eyes to the need for systemic change. She subsequently became involved with the underground Marxist movement and aspired to become a socialist writer, but realized she needed to learn more. Despite the difficulty of leaving her husband and five year-old son, Kollontai traveled to the University of Zurich to study.

Her time in Zurich shaped the course of her personal and political life. Upon returning to Russia, she left her husband and dedicated herself to improving the lot of women. As she deepened her study of Marxism and solidified her views, it became clear that her principle enemy was bourgeois feminism.

At the beginning of the 1905 Revolution, Kollontai went head to head with the Union for Women’s Equality and publicly called for proletarian women to disassociate themselves from the bourgeois feminists. She believed that women could be liberated only through “the abolition of private property, the end of traditional marriage, and the withering away of the family.”

At the time, “the Woman Question,” a discussion concerning the legal rights and the political, economic, and social roles of women, had become increasingly urgent across Europe. In Russia, the question had been a central part of the socialist movement since the 1860s. In 1909, Kolontai wrote The Social Basis of the Woman Question, which argued that women should work within the socialist movement to further their own collective aims. Moreover, she believed that the exclusively male government would not create meaningful reforms for women, writing that “only direct participation in the government of the country promises to assist in raising women’s economic situation.”

In Kollontai’s opinion, bourgeois feminists were unlikely to further the interests of working class women. Along with Clara Zetkin, she insisted that “the Woman Question” was not separate from the overall aims of socialism. Rather, womens’ rights were critical to the success of the socialist movement.

Kollontai believed that women’s oppression was inevitable under capitalism, and that working class women had to organize to fight for themselves and their class. She writes that “for the majority of women of the proletariat, equal rights with men would mean only an equal share in inequality.” She believed that class struggle and the struggle for women’s rights are irrevocably intertwined and that one could not advance without the other.

Kollontai remained largely isolated in her views, since many Russian socialists believed that the revolution would resolve women’s inequality on its own. Lacking support and inspired by Clara Zetkin’s leadership within the German Social Democratic party, Kollontai threw herself into organizing. While still in Russia, she founded a Working Women’s Club, which offered lectures and library access to 200-300 women at a given time, and attempted to bring a worker’s delegation to the All-Russian Women’s Congress in 1908.

After a warrant for her arrest forced her abroad, she organized strikes in France and Belgium. She also attended the Second International, campaigned for women’s suffrage with Clara Zetkin in London, and spoke in Denmark, Sweden, and Bologna. She was arrested in Germany and Sweden, but released quickly on both occasions. During her time abroad, she began corresponding with Lenin and ultimately joined the Bolshevik party.

Upon Kollontai’s return to Russia just after the 1917 revolution, Lenin appointed her Commissar of Public Welfare. Although it was a secondary position, the appointment allowed her to become the first woman on the council and the first woman appointed to any modern government.

In her new position, Kollontai sought to expand women’s access to services and created a “Prenatal Care Palace,” which provided care and teaching for expectant mothers. Unfortunately, she was met with strong opposition and the facility was burnt to the ground soon after it opened. Undeterred, she went on to found a Central Office for Maternity and Infant Welfare, but did not have enough funds to effect meaningful material change. Later, she became the director of the Zhenotdel, the women’s section of the Central Committee.

Kollontai is often remembered for her ideas about the family and sexual liberation. She elaborates on these values in the Autobiography of a Sexually Emancipated Communist Woman. She believed that children should be brought up and cared for in communal homes away from their parents, but was aware this idea would not be well-received among peasant women as well as other communists.

Kollontai saw how workers’ efforts at establishing public services, like communal dining rooms, nurseries, and wood supplies, often failed due to unnecessary bureaucracy. Seeking to involve ordinary workers in government and counter the power of the centralized state, Kollontai became a leader in the Workers’ Opposition. She authored a pamphlet on the issue that angered Lenin and resulted in her removal from the Zhenotdel.

While Lenin supported Kollontai and other communist women in the campaign for women’s rights, the growing power of the Soviet bureaucracy in the mid to late 1920s ultimately quashed their efforts and rolled back a number of important reforms for women. The rise of Stalinism by the late 1920s meant the eradication of dissent within the USSR and the purging and murder of  many old Bolsheviks.

Kollontai was lucky to have survived, but this came at a price. Despite her previous commitment to pacifism, she was forced to either adapt to Stalinism or flee. Beatrice Farnsworth writes that from 1937 onwards, she “began…to destroy her political self.”

Fearing for her own life and that of her former husband, Pavel Dybenko, she compromised her values and assimilated to the Stalinist regime. She traveled abroad to represent the Soviet Union as a diplomat, although less is known of her diplomatic career due to secrecy surrounding the matter. While she turned to writing to express her views, outwardly she remained devoted to the regime and was granted various awards for her services before her death in 1952.

Kollontai was a committed socialist and revolutionary, making numerous personal sacrifices throughout her life. She was a leading socialist organizer and thinker and played a significant role in advancing the interests of working class women inside and outside Russia. Her accommodation to Stalinism and the inability of the Soviet government to build on her and other socialist women’s vision for women’s liberation should not diminish her achievements.

Kollontai’s extensive writings leave behind a vision of a society in which women’s advancement and workers’ liberation go hand in hand. Although this vision was not realized in her lifetime, her idealism and dedication remain a source of inspiration.