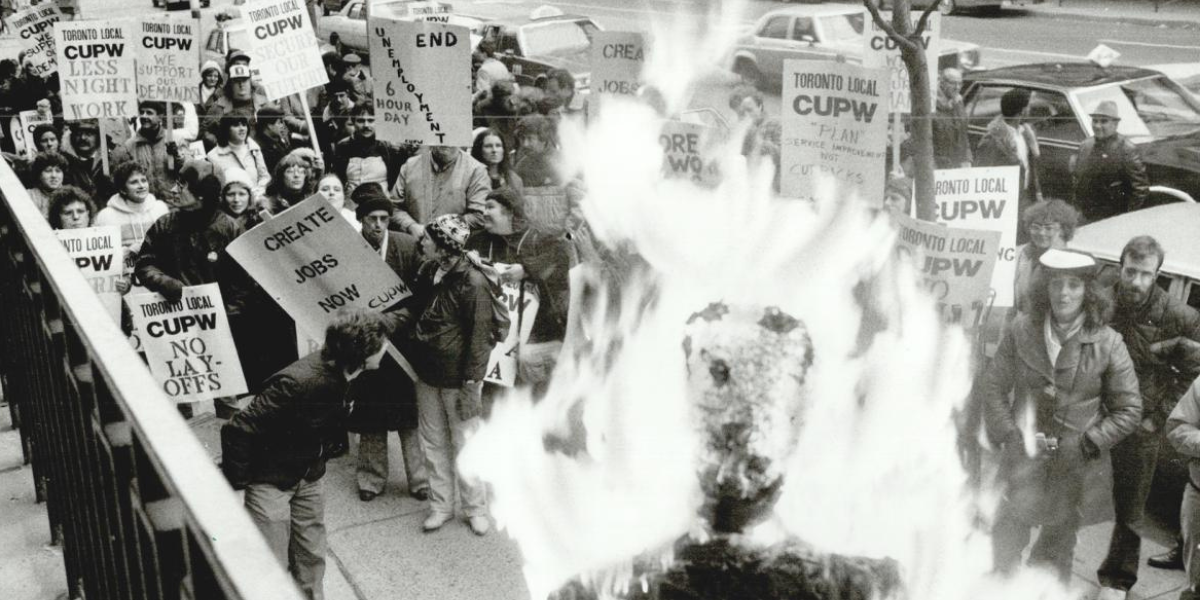 In February 1981, the then president of the Canadian Union of Postal Workers (CUPW), Jean-Claude Parrot, penned an article in the CUPW publication entitled “The low-profile approach – a disaster”. This article was a critique of other parts of the labour movement that sought not to challenge employers and governments who attacked workers, but to accommodate to them. Parrot exposed why a low-profile approach to bargaining and solidarity would only embolden employers and rightwing governments. The article was written in the wake of an illegal strike by CUPE healthcare workers in Ontario. It was also written just months after Parrot had finished serving two months in jail for defying back-to-work legislation in 1978. At the time that strike was criticized by the president of the Canadian Labour Congress. As 55,000 education workers prepare to defy the Ontario Conservatives, this article is a powerful reminder about the need for class solidarity and a confrontational approach by labour to unjust laws.

Recently in Ontario, 12,000 hospital workers defied provincial legislation and walked off the job in a bitterly fought struggle with an employer whose view of industrial relations belongs in the Stone Ages. In fighting to achieve a decent living wage, better working conditions and to protect their jobs against further cutbacks, these hospital workers also had to fight for their basic right, the right to negotiate with the right to strike. In doing so, they were forced, despite the law, to reject binding arbitration, defy court orders and injunctions and stand up against an employer who provides them with the worst working conditions of all hospital workers across the country. And that in Ontario.

The response of the labour movement to this most important labour struggle launched by CUPE was very eloquent in its silence. The absence of visible support for these workers by either the leadership of the labour movement or the NDP in face of one of the most significant labour struggles in Ontario since the Inco workers’ strike in Sudbury opens to question what I call ““the low-profile approach”.

As a joint strategy, the low-profile approach is designed for the labour movement and the NDP to be perceived by the public as being nice and reasonable. Their reasons for this are, first, that they do not want to provide the government with an excuse to introduce bad legislation taking away your right to strike or other rights you have under the law. Secondly, they do not want to create controversies that will provide ammunition against NDP candidates at election time. While many leaders of the labour movement and of the NDP might be implementing this low-profile approach in good faith as a strategy, the fact remains that this approach hurts those who count on these leaders the most, the workers themselves.

Presently, we, Canadian workers in both the public and private sectors, are coming under increasingly serious attacks from employers. The Ontario Hospital Association, B.C. Tel, Chrysler and Treasury Board are but a few examples of employers who are taking an increasingly hard line”’ against their employees. Judging from recent statements made by federal and provincial governments, we can expect even more attacks in the future.

It is the present practice of major leaders of the trade union movement and of our political allies to take a low-profile approach during major confrontations. Is the “low-profile” approach the answer to the “hard-line” approach of the employers ? Obviously not. This was surely not the answer in the case of CUPE hospital workers in Ontario, nor was it the answer in the Inco steelworkers in Sudbury or the postal workers’ strike.

The struggles of Canadian workers are too serious and too difficult for the labour movement to drop from sight. Fortunately, several other leaders of the labour movement have understood this. One just has to look at what the B.C. Federation of Labour is doing to organize actions all across British Columbia in support of workers who are in a serious struggle against some of the most anti-worker employers in this country.

The labour movement has the ability to provide effective leadership to Canadian workers during what is likely to be a period of increasing attacks by employers. It’s simply a question for the leadership to change its strategy, a strategy that is not working and is, in fact, becoming a disaster for the workers. Furthermore, this strategy does not work for our political allies either, as it seems that a low profile equals low votes for NDP candidates who take this low-profile approach not only on workers’ issues, but even on their own party policies.

In the final analysis, this low-profile approach is, in my opinion, perceived as a sign of weakness and, therefore, does not prevent the government from introducing bad legislation and does not help NDP candidates at election time. If leaders in the labour movement expect support from the membership and if NDP candidates expect support from the public, they must be perceived as being strong, committed, dedicated and prepared to take a stand on controversial issues. Respect must be earned.