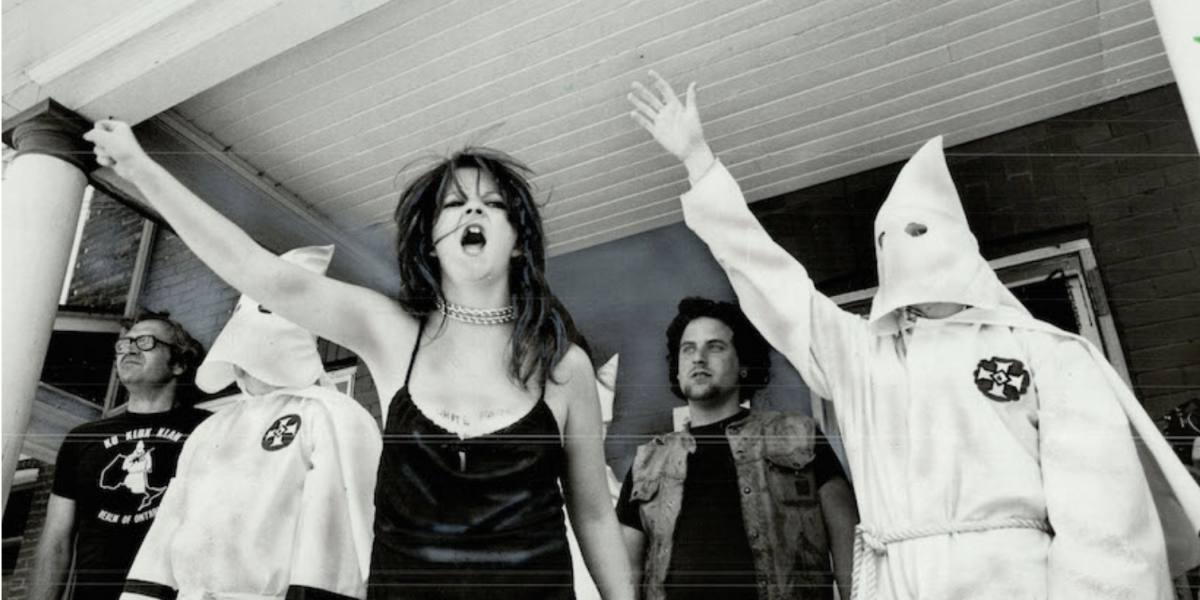 The Ku Klux Klan in Canada: A Century of Promoting Racism and Hate in the Peaceable Kingdom by Allan Bartley (Formac, 2020)

The Ku Klux Klan in Canada is Allan Bartley’s condemnation of Canada’s history of racism and bigotry. In response to the mainstream perception of Canada as a tolerant multicultural nation, the author has crafted a narrative that illuminates the attacks on various minorities across the country, perpetrated under the banner of the Ku Klux Klan (KKK).

The KKK first rose to prominence in Canada after the 1915 Toronto premiere of “The Birth of a Nation.” The racist film was an instant hit. Advertised across Canada as “the 8th wonder of the world,” it entertained audiences with imagery of the American Civil War and inspired racist Canadians to organize through the Klan. The second half of the film, set during the reconstruction period in the American South, glorified the KKK as the arbiters of morality in a world gone mad after the end of slavery. Its popularity translated into the naissance of the “Canadian Klan” in diverse forms and locales.

Birth of the Klan

Bartley illustrates how the KKK took root in Canada after audiences eagerly lined up to see Hollywood’s first feature-length film. The theatrics of the film glorified the violent tactics of the Klan, paving the way for Kleagles (Klan Recruiters) from America to visit Canada to stoke racial tensions and rally together local racists. The public interest that flared up was often short-lived; however, there exists a trove of these moments of surging support for the Klan throughout Canadian history.

The KKK, as an avenue to act on sectarian hatred, was transported north to Canada by those looking to profit from the sales of Klan memberships and robes. Such ambitions were eagerly fed by the homegrown racism that often predated the arrival of American Klan organizers. The Kleagles rebranded to fit the needs of Canadian bigotry and racism at different levels of society. The Canadian Klan exploited sectarian differences that would not have been as relevant in an American context; namely, the divide between Protestant anglophones and francophone Catholics.

The book details the responses of public officials and members of civil society groups who were either willing to turn a blind eye to the Klan or actively work with them to further their own political agendas (e.g., numerous Orange Order Lodges across the country, well known defenders of “Anglo-Saxon heritage” in their own right before their Klan involvement). Meetings for Klan recruitment often took place at Orange Order Lodges. This book helps readers gain insight into the fundamental role racism has played in Canadian society and the cultural forces that can challenge it.

The Klan’s resurgence in the 1980s and the 21st century was not met with the same widespread support it received in the 1920s, as the book offers accounts of how anti-racist groups pushed back against Klan activities. However, Bartley rightly marks the election of Donald Trump in 2016 as a catalyst that renewed Canadian-based white supremacist ideologies, identities, and movements. In the wake of Trump’s election Canada saw a spike in anti-immigrant, anti-Muslim, anti-Black, and homophobic incidents and attacks across the country.

Bartley makes note of the attack on the Centre Islamique de Quebec on January 29, 2017, when Alexandre Bissonnette shot six Muslim men to death and wounded nineteen others. Bissonnette’s social media posts make clear references to Trump’s victory and anti-Islamic rhetoric. The internet provides a fertile platform for the proliferation of racism and bigotry. White supremacist material can be anonymously published online for a community of like-minded people, negating the fear of public backlash. American racist websites such as Stormfront.org offer a “Stormfront Canada” subsection dedicated to their northern neighbours.

Bartley’s work provides a nuanced look at the role of the KKK in Canada. He contributes to the discourse confronting the racist past of Canada, connecting the reader to histories that challenge the reputation of a diverse and racially harmonious Canada. Canada’s past KKK activities can be connected to the contemporary hatred propagated online by and for Canadian audiences who are interested in the same sort of division, racism, and bigotry symbolized by KKK. The Ku Klux Klan in Canada aptly illustrates how the hateful legacy of the KKK was implanted and flourished in Canada.