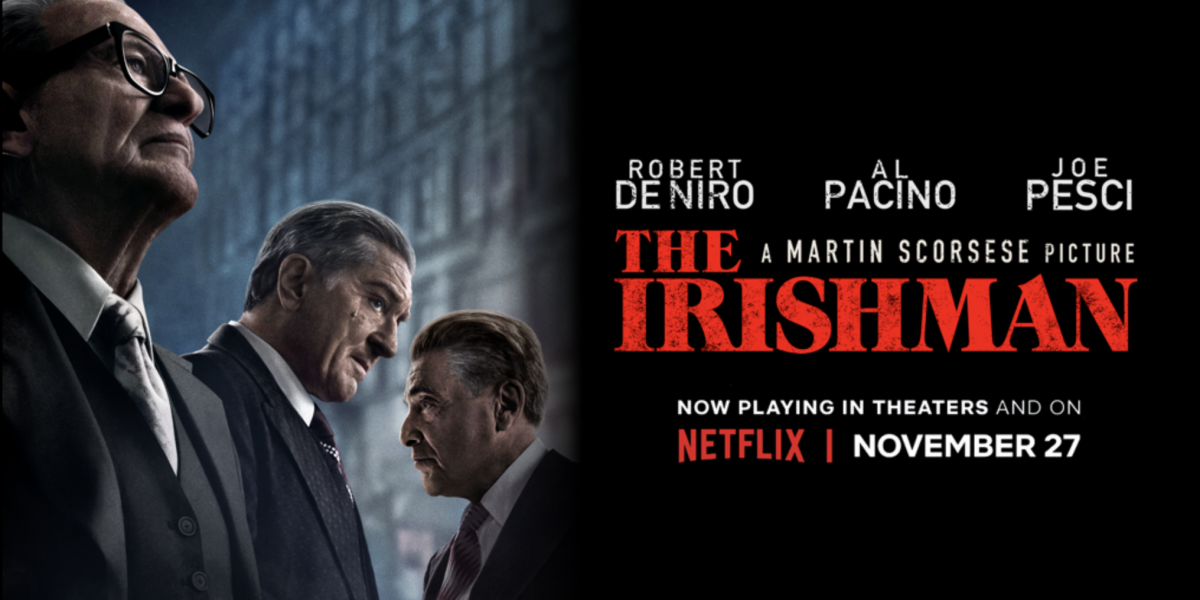 When it comes to gangster and mob films, few directors have mastered the genre like Martin Scorsese. Goodfellas remains arguably the greatest film of its kind and the thought of him bringing back Robert DeNiro and Joe Pesci (the latter out of retirement) to join Al Pacino in a film about Jimmy Hoffa and his downfall at the hands of the mob was exciting for those who love film.

In the lead up to release of The Irishman, Scorsese decided to inject himself into some pretty tense cultural debates, slighting super hero movies as amusement rides and cautioning that the enormous budgets and screen time they suck up was a threat to more innovative but smaller films struggling to make it into the cineplexes. Putting aside the irony that The Irishman had a budget of $160 million (mostly devoted to age reducing technology), he made legitimate points about an industry unwilling to take chances on edgy and risk taking art instead of the guaranteed money generators of mindlessly fun action films.

So here was hoping that Scorsese showed the world how it’s done.

The Irishman takes place in the 1960s and 1970s,following Frank Sheeran (played by DeNiro), a Philadelphia truck driver and eventual Teamster local president, who befriends crime boss Russel Bufalino (played by Pesci masterfully) and becomes a henchman for him. Eventually, Sheeran is sent to assist Jimmy Hoffa (played by Pacino), president of the International Teamsters Union, who has developed links to organized crime eager to access the Teamsters’ $8 billion pension fund for various projects. The film then chronicles the friendships and political conflicts that develop between organized crime and Hoffa, as the latter goes to jail for fraud and when released is eager to return to the presidency of his union. Sheeran tries to mediate between the different forces, but Hoffa is depicted as stubborn and unwilling to compromise with criminals who would not hesitate removing him from the scene, which of course they famously do. Eventually, Sheeran must live with the crimes he has committed.

In terms of filmmaking, The Irishman is a very different film than Goodfellas or other Scorsese works. It is less flashy, less dynamic shots, the pacing slow and contemplative, with hardly any musical score. More than anything, it’s a character study of Sheeran and the consequences his life decisions have as he grows older. This means that the first two-thirds of the three hour and twenty minute movie are a bit of a slog. That said, the last hour is riveting and the denouement is heartbreaking, reminiscent of Clint Eastwood’s Unforgiven, where the end of life for bad men is fully contemplated and it ain’t pretty. Bad men die alone.

Scorsese is also smart to let the performances speak for themselves, and the less glitzy product lets the very toned down Pesci and DeNiro shine. They are less caricatures of mob men (which they arguably are in Goodfellas) and more rounded characters, unsure of what to do in moments of crises, filled with regrets about what they have done and how it has impacted the ones they love. Especially for Pesci, each line is delivered thoughtfully, where so much is unsaid but revealed clearly in the subtle facial expressions he shows. Sadly, Pacino’s performance is the opposite. His Hoffa is stubborn to a fault but also clownish and over the top. As others who knew Hoffa or have heard of the actual Hoffa, this was not him.

In many ways, this is one most disappointing part of The Irishman, its handling of Hoffa and unions. It is easy to focus on the corruption that was rampant in the Teamsters, with their ties to the mob and their misuse of members’ money. But there was also the other side of this, a union that was keen on fighting for its members, having no qualms about challenging crappy employers when their members were done wrong. There is a passing moment when Sheeran is being honoured by his local and Hoffa gives a speech where he notes that Sheeran held the record for most times arrested on a picket line. But none of those moments, those strikes, those conflicts, are ever shown.

We have seen plenty of mobster films, with their blood and guts, but why not show us even a glimpse of the Hoffa world that made him a hero to many Teamster members, even after he was sent away to jail. There is no mention of Hoffa organizing dinners with rank-and-file members after leaving prison in his attempts to win back the union presidency. Instead Scorcese focuses on his tete-a-tete with other union heads, keen on keeping the pension slush fund in their hands. In a movie this long, there certainly was room to include some of these elements and reflect a more complicated figure like Hoffa than we get from Pacino’s hammy performance.

Another qualm is how male focused this film is, even compared to previous Scorsese films. The women characters have few lines, and the one character that has more of a plot role (Anna Paquin as Sheeran’s daughter) barely says a word. Although Scorsese is trying to get at the failures of men and how their failures as fathers, as husbands, as members of their union have lasting and tragic consequences, leaving them to die alone, the dearth of words left for women characters (who are the victims of the male actions) is ridiculous at times, especially in light of how much time the film takes.

Despite these serious shortcomings, The Irishman is a good film, one that shows a different side of Scorsese, a film that is relatively subtle for a gangster film, focused on the emotional toll that the gangster life takes, and the regret that follows those who manage to survive. Scorsese is a pro and his mastery of the form is on full display. It has already won the National Board of Review and New York Film Critics award for Best Film and will certainly be an Oscar contender. That said, it left too much unsaid and gave a very one-sided depiction of the world it wanted to reveal. For me, that leaves it well short of any sort of masterpiece some are calling it.