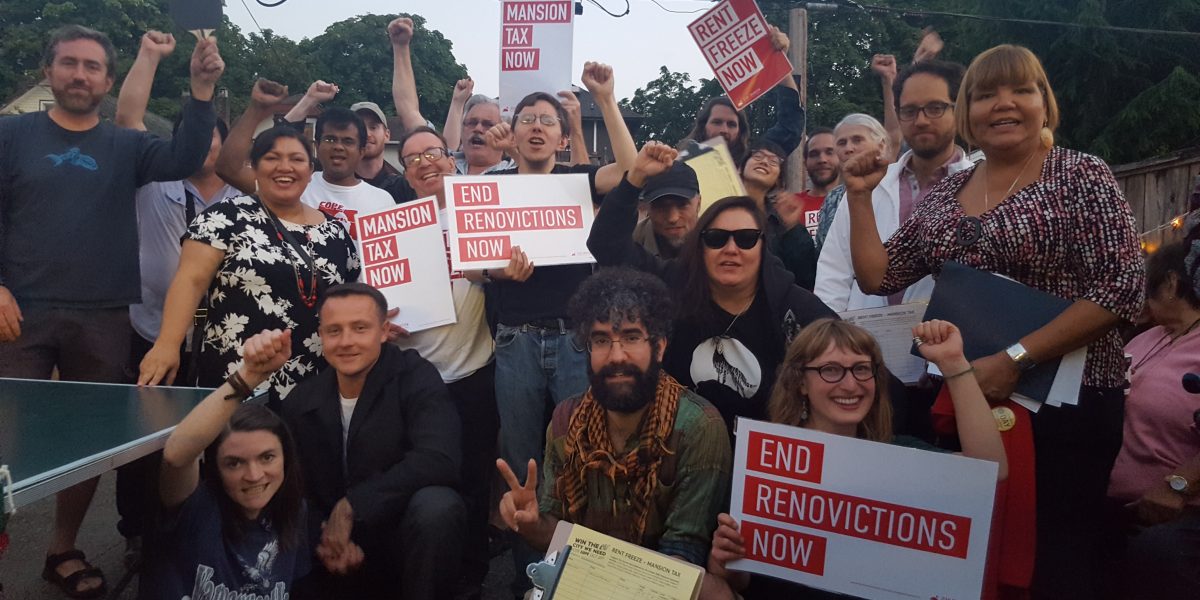 Canada is in the midst of a housing crisis, epitomized by Vancouver. With a one percent rental vacancy rate and an average rent of $2,130 for a mere one bedroom apartment, it’s no wonder that there are more than 2,000 homeless people in Vancouver—with that number expected to  grow unless something is done to alleviate the lack of affordable places to live.

The 2016 Census data identifies more than 144,000 households in “core housing need”—in need of affordable housing due to spending too high a percentage of income on shelter costs or due to the poor condition of their home. This number has almost doubled in the past 20 years. While most of these households are renters, 39 percent are owners—working class owners at risk of losing their homes when the housing bubble bursts. The census further identifies those spending more than half their income on shelter costs as being in dire need. This number grew from 55,760 households in 2006 to 67,125 households in 2016. These are mostly renters, and are considered to be people at risk of homelessness.

Trudeau’s Liberals have promised relief from the housing crisis. But what specifically have they promised?

The Liberals’ plan to alleviate the housing crunch might sounds good at first. Trudeau is proposing to increase the supply of housing by providing incentives to developers, and to make it easier to buy a home, by providing a five to ten percent shared mortgage with CMHC for first-time buyers. But like so many of Trudeau’s proposals, once we look beyond the superficial aspects, we see that this plan will solve little.

Increasing supply has been touted for years by previous governments and business interests as a solution to the rental housing crisis, but it hasn’t helped. As long ago as the 1960s, right-wingers promised that building housing for more affluent renters would help those less fortunate by a sort of “trickle-down” theory of housing called “filtering.” According to this theory, well-off renters would leave more affordable rental units to move into the newer, fancier ones—leaving older, more moderately-priced units available for lower-income renters over time.

In Vancouver, and no doubt elsewhere in North America, this approach has proven a dismal failure. While some more affordable rental units may be vacated by those moving into new developments, without real rent control that ties rent increases to the unit rather than the tenant, landlords can and do jack up rents between tenants. This makes previously affordable units increasingly unaffordable.

Everyone can be a homeowner…and have a risky mortgage

Are the Liberals right to encourage more people to buy rather than rent? For many working people, owning a home seems much more attractive than being at the mercy of a landlord. Rents are very high, especially in Vancouver and Toronto, and many feel that money spent on rent is wasted compared to money used to build up equity via a mortgage. But homeownership is not the solution the Liberals say it is.

First of all, condo prices are out of sight. In Vancouver in 2019, the average price of a one bedroom condo is $600,000. The annual income needed to make a typical mortgage for that condo affordable (i.e. monthly payments no more than a third of income) would be about $85,000. With the estimated median income in Vancouver at approximately $37,000 for individuals and $91,000 for couples, buying a condo is just not possible for many working Vancouverites. To be eligible for the Liberals’ Home Buyer incentive, the home must cost less than four times the family’s income, with their annual household income required to be less than $120,000, Vancouver and Toronto residents are unlikely to be eligible for the Liberals’ plan anyway. But even for those in other areas who are eligible, the incentive is not a great idea.

In the present period, extremely low interest rates have made home ownership possible for some working people. But when workers buy a home, they often are stretching themselves financially in order to pay a down payment and afford monthly payments.  Owning a home has become a common type of investment; as people are less and less able to rely on government and workplace pensions, they are increasingly using a home as an investment to save for retirement.

But this assumes interest rates will stay low and house prices will keep increasing. Unfortunately, interest rates are likely to rise in the future, and they don’t need to rise much for many workers to be at risk of defaulting on their mortgages and losing their homes. And if workers run into financial trouble and are forced to sell, a burst housing bubble or even a small drop in house prices can mean big money problems for them.

The NDP’s faith in the market

Jagmeet Singh has said the NDP proposes to build half a million “affordable housing” units over the next decade. It’s not clear what proportion of these would be truly affordable, though, as only some are slated to be co-op or non-market housing. The NDP plan seems to be to spur investment in “affordable” housing by the private sector by providing incentives like removing the GST from the cost of building this housing. Singh has also proposed giving low income renters a subsidy, and doubling the first-time homebuyers’ tax credit.

While affordable rental housing is desperately needed, experience in Vancouver has shown that the private sector is incapable of building truly affordable housing. What the NDP is proposing sounds far too similar to the Vancouver ‘Rental 100’ program, which offers financial incentives to developers to build rental units, as long as they are deemed affordable. But the city’s definition of “affordable” in Vancouver is a whopping  $2,056/month! And, as activists in the Vancouver Tenants Union (VTU) have explained, these rents are just for the initial tenants- without Vacancy Control (real rent control tied to the unit), and landlords can jack up the rents for subsequent tenants. Ironically, older and more affordable units are often demolished so that these so-called affordable ones can be built on that site. This means that tenants are “demovicted” when the older, truly affordable building is demolished, and many cannot afford the higher rent in the new building.

The NDP’s proposed homebuyers credit just repeats the mistakes of the Liberals’ policy in pushing people to buy homes that they may be unable to afford when rates go up. And while some kind of relief for low-income renters is needed, a mere subsidy ends up just going into landlords’ pockets as they adjust their rents accordingly. So what is a better solution?

Truly affordable housing, built by the government, is the only solution. A little bit of history shows us what is possible when it comes to public housing. For example, in the four years between 1985 and 1989, the federal government helped fund 5356 units of social housing per year in Canada. If they had continued this level of funding, more than 130,000 affordable units could have been built between 1994 and 2019. But instead, the federal government passed on this responsibility to the provinces in the 1990s. With the advent of austerity all levels of government decided that public and co-op housing weren’t something they wanted to fund. However, experts in regional planning note that this lack of affordable housing is directly related to the increase in homelessness over the same period. They also note that other regions like China, Singapore and Hong Kong have put money into increasing the supply of public housing- and we could do the same.

The waitlist for social housing has increased by 45 percent in the past five years, with the waitlist for affordable seniors’ housing increasing by 100 percent. The Canadian Center for Policy Alternatives (CCPA) has called for between 5,000 and 10, 000 units of non-profit housing to be built per year in Metro Vancouver alone just to keep up with demand. They suggest that the government could spend about $3 billion a year to build this housing on publicly owned land, and recoup the cost over time via the resulting rental income.

While the proposal to invest in social housing put forward by the CCPA is not unreasonable, since it’s not that different from that made in the post-war years, it won’t happen without a massive fight. The underlying problem behind rising condo prices, and therefore also rising rents, is that while housing should be a common good and a human right, it is a lucrative investment opportunity under capitalism. Indeed, COPE city councilor and housing affordability activist Jean Swanson hit the nail on the head when she said at a rally last fall that “we need to take the profit motive out of housing like we took it out of healthcare. The status quo and the market will never solve the crisis.” But how do we do that?

To win even limited reforms like slightly increased investment in social housing, we need to mobilize working people in large numbers to fight like hell. If you are interested in joining that fight in Vancouver, you should start by joining the VTU. But we can’t stop there; as a socialist, I would argue that we need to expand the struggle for housing justice to link up with those of other working people. That’s the only way to win Jean Swanson’s and VTU’s vision of housing justice for all.