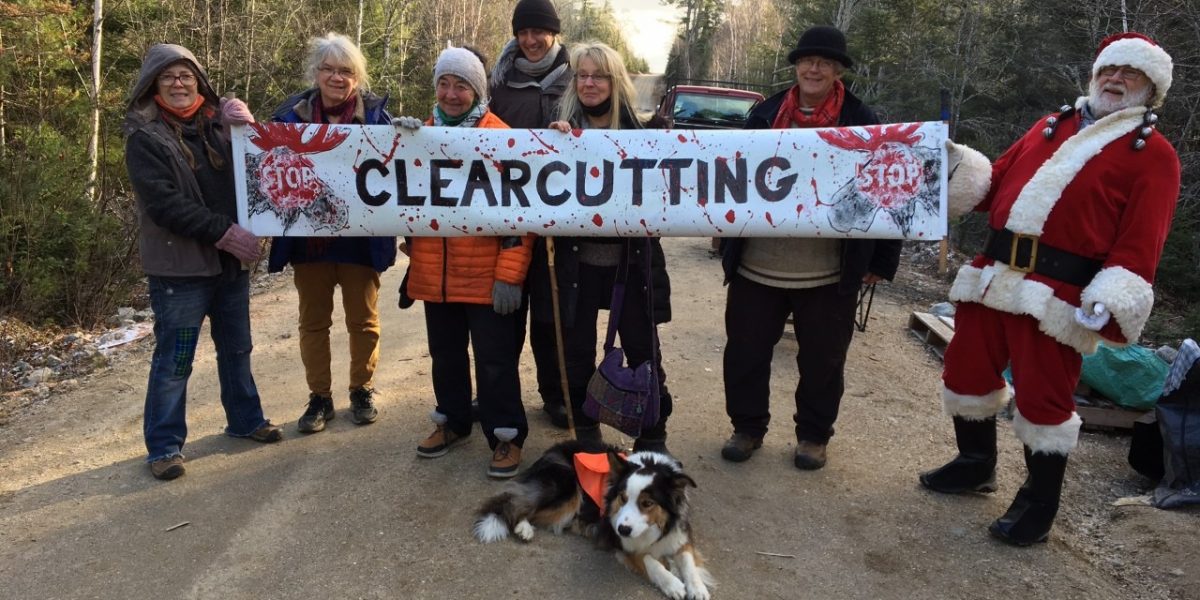 Nina Newington lives on a small farm in Nova Scotia. She is a writer, a carpenter, and designs gardens. She hails from England, but has since settled in Western Nova Scotia. Newington has many passions, and one of those leads to finding herself in the woods.

You see, Newington is working alongside other activists to protect the local woodlands and endangered moose. I had a phone call with Newington, during one of the rare times she is home and has reception- we discussed the ongoing issues with the forestry industry. Newington says that the forest industry in Nova Scotia is nothing short of terrible.

“We have been promised various reforms over the last 10-12 years the most recent being a report that came in 2018 saying they would shift from clear cutting to more green alternatives,”  remarks Newington. “However, they basically have done nothing but relabel clearcutting”

Due to this lack of respect for the woodlands and the already endangered mainland moose Newington, along with many others decided to take it to the frontlines. As Newington notes:

“A lot of different groups have been working on this, basically the clear cutting is happening across the forest and woods that could have been ecological forestry, we heard of clear cutting going on in an area that is habitat for mainland moose – the department of land and forestry is supposed to be protecting endangered species which includes the mainland moose and have failed to do this for all the years the moose have been endangered- meanwhile saying don’t worry we are working on it”

The reality, however, is that nothing is being worked on, the provincial government has since approved more clear cutting on crown land, despite there being plenty of moose sightings in the area. It is because of this that forest protectors have set up an encampment in Digby County near the community of New France.

The encampment has been on a logging road in Digby County since October 21. On November 22 a second blockade was set up on another access road. This move was triggered by the activists seeing more logging roads being built, signalling that more cutting is coming.

On November 22 the forest protectors were gathered around a fire ready to settle in for their first night at the new encampment. Their calm evening didn’t last long however, as two RCMP vehicles and a truck of loggers pulled up to the encampment. The loggers had caught wind of the occupation and called the RCMP. The forest protectors explained that they were allowed to be there, and that the RCMP would need an injunction, and so they left.

The forest defenders continue to demand safer ecological forestry practices– they are fighting for the woodlands that are home to many creatures, including the endangered moose.

On December 15, nine of the protestors at the encampments were arrested after being served with an injunction. The protesters were charged with criminal contempt of court. They were released and will appear in court in March 2021.

Days later on Friday, December 18 protesters confronted the local Liberal government to demand a moratorium. With one protestor and activist, Jacob Fillmore, camping out in the Halifax Grand Parade since the forest defenders were arrested days earlier. It is clear that support for the group is coming from across the province.

The forest protectors are not the only ones concerned, local hunters have expressed to the activists that they are on their side.

“Hunters are horrified. A lot of them have hunted this area for two, three, decades. They come back and end up getting lost because the forest has been destroyed,” said Newington. “A place they would have hunting blinds is suddenly gone, and there is very little wildlife once the forests are destroyed”

The continuous clear-cutting is having a devastating impact on the forests, the wildlife, and the locals. The COVID-19 outbreak has made a dent in their planning, with some demonstrations and actions having to be cancelled, but they are still going strong;

“Some people write letters, some sign petitions, some schedule, some make art and banners, some march, and some are here at the encampment – it takes a village” says Newington. She adds that “At the encampment we drink great coffee and we have good food!”

Newington hopes to see encampments and blockades like this crop up across the province. She wants to see logging suspended in certain areas, and for us to treat the forest how it should be treated. Her biggest hope is that we change how we view nature, and to learn to respect it the way the Mi’kmaq have for generations. As Newington states:

“When I read or listen to stories from that tradition it is so apparent to me that those traditions were built around keeping humans in order. When you listen to those stories they are so clearly rooted in interconnection, it often makes me cry, it is not complicated. It is a completely different model than what we are operating in. No doubt in my mind.”

Newington mentions future efforts involving local Mi’kmaq and stated that herself and other members are reaching out to local Mi’kmaq land and water protectors. Newington sees the interconnectedness but also sees how working together on projects like this can be seen as a type of reconciliation.

“Reconciliation is saying we [settlers] screwed up and we have a lot to learn from you and can we walk forward from here,” says Newington. “To me, to even begin to understand the forests we have to start learning to see in a two-eyed seeing lens and to be teachable”

Two-eyed seeing – Etuaptmumk –  being a term coined by Eskasoni Elders Albert and Murdena Marshall, it means a way to look at the world through two eyes, one being an Indigenous lens and the other being a Western lens.

Nina Newington hopes to see these blockades take off, and for nature and all its connections to be protected and respected. Something we should all strive for – especially in relation to reconciliation.

“We are currently raising funds to cover legal fees. Ecojustice is taking on part of our case in conjunction with Jamie Simpson and Juniper Law,” says Newington. “Any funds left over from our legal costs will be donated to Ecojustice.”

If you want to get involved visit Extinction Rebellion Nova Scotia’s Facebook page  or email xrns@riseup.net.

You can donate to Ecojustice here: https://www.gofundme.com/f/support-our-forest-defenders . E-transfer to XRAnnaco@gmail.com  Name if required is Debbie Stultz-Giffin. Omit hyphen if your bank fusses. Please note spelling is Giffin not Giffen. Security Q and A not necessary.