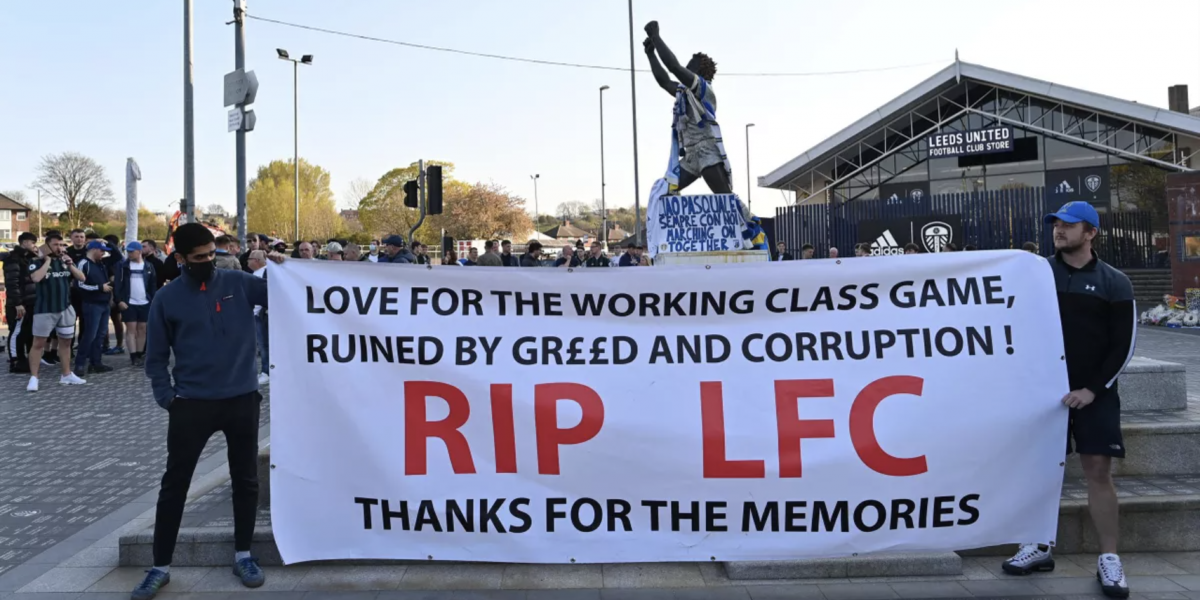 “Made by the poor, stolen by the rich,” read the banners held up in protest of an event that can only be described as the largest power grab in recent history of soccer. On April 18, some of the richest clubs in the world proclaimed the European Super League (ESL) –  a breakaway from the traditional pyramid structure of European soccer competitions.

This was met with the largest protest the sport has ever seen, as fans, players, managers and experts were unanimous in their condemnation of the Super League. By the next morning, thousands had gathered in the streets in front of the stadiums of these clubs demanding they withdraw from the competition. The pressure kept mounting as the governing bodies of soccer issued ultimatums threatening the ESL clubs with expulsion from national and international soccer.

All that pressure paid off, as one by one the ESL clubs withdrew from the competition. A victory for the working class against a cabal of the richest men in the sport, or so ran the sentiment across social media.

Why was this such a big deal?

Hyper-commercialization is not a new trend in European soccer. Money ruining the sport is a common sentiment held by fans, particularly in England. What makes the ESL particularly evil is that it’s a blatant power grab that goes against the very ethos of European soccer competitions. Whereas teams from the different domestic leagues must qualify for a place in the Champions League, the founding members of the Super League would have a permanent place in their competition. In short, this was an attempt by a self-selecting cabal to rob European soccer of its crown jewels and take control of its elite competition.

Part of soccer’s allure is its unpredictability: the idea that the team at the bottom of the table could defeat the team at the top, that success is not guaranteed. But this unpredictability works against the interests of billionaire owners. The Super League would exclude every other club from the riches and glory that comes from participating in Europe’s top competition, while exponentially increasing the wealth of the founding clubs. The idea of a closed competition for the top clubs in Europe, where the clubs control rights to the competition, is not new–proposals for a European Super League have been floated since at least the late 90s–but reasons why these rich owners chose this particular time for their announcement of the ESL is made clear when you examine which clubs pushed for the competition.

Manchester United, Liverpool and Arsenal, the three clubs with the most English league titles, are owned by US sports companies that made their fortunes by maximising revenues in a closed shop system. In the US, where the teams at the top leagues remain there indefinitely, and new teams must buy their way in, the investments of those sports companies are protected. It was only a matter of time until they tried to bring that system to Europe. In Spain, F.C. Barcelona and Real Madrid F.C. have both reported significant losses during the pandemic, which they cite as the reason for why the ESL has to happen. Nevermind that these clubs have been hemorrhaging cash for years now due to a history of bad decisions.

In fact, the pandemic and resultant empty stadiums have disproportionately hurt the smaller clubs, since they are more reliant on ticket sales. The ESL is an attractive idea during the pandemic when stadiums lie empty. But here, there is an aspect of disaster capitalism. Back in October 2020, Manchester United FC and Liverpool FC, two of the six English clubs that have signed up for the Super League, had drawn up plans for a local power grab. They would be willing to send rescue packages to the smaller clubs, in return for complete control of English soccer. The proposals were shot down then, but the idea of taking advantage of a disaster while everyone is struggling has reared its head once again. The Super League promises to hand out solidarity payments to help the other clubs through the pandemic. The price, of course, is handing over the keys of European soccer to the founding clubs indefinitely.

The Super League clubs further claim that the younger generation are losing interest in soccer, and the prospect of watching Europe’s biggest clubs play each other every week will bring them back. But this is a problem of their own making, as ever increasing ticket prices have priced out the younger generation. But rather than making attendance more accessible for local fans, the ESL wants to focus on ad revenue overseas. Local fans do not matter- that is the message of the ESL.

What can we learn from this

This particular week will likely be remembered in history for a number of reasons.

One, soccer (just like anything else that’s widely consumed) is political. But when Jeremy Corbyn suggested the need to reign in these billionaire owners in favor of democratizing the sport, fans and media criticized him for being a ‘communist’. Rich owners have too much power and do not have the interest of the sport or the fans in their list of priorities. Democracy and transparency are just obstacles to making money. Profit motives outweigh all other considerations, particularly with big investors involved. Bear in mind the history of these clubs were born and grew from workers. Capitalists have basically taken over and now cast aside the communities that built these clubs.

Second, mass mobilization works. What took wealthy capitalists years to plan was foiled in two days by mass protests. While many have argued that it was actually threats of expulsion by governing bodies that foiled the ESL, this is a flimsy position given that the clubs that pulled out first had faced the most resistance from the fans. Where protests in Italy and Spain were haphazard, the protests in England were coordinated and immediate. It is unlikely to be a coincidence then that all six English clubs were racing to pull out, while Spanish and Italian clubs lingered on.

Third, it’s also worth noting which clubs were resistant to this ‘heist’. The biggest were the German clubs, and Paris Saint-Germain F.C (PSG). PSG had conflicting interests as they owned broadcasting rights for the Champions League. But the German clubs resisted because of the 50+1 fan ownership model which would mean any executive who pushed for the ESL would likely lose their position at the club.

More work to be done

The whole debacle has prompted English soccer to acknowledge there is a problem. Suddenly, Jeremy Corbyn’s position does not sound outlandish. Seems like ‘communists’ might know a thing or two. There are now calls from different corners in English soccer for setting up independent regulators to oversee the sport, or to implement the German model, that ensures that the club’s members have a voting majority. It is clear that the clubs cannot be allowed to regulate themselves or things will keep getting worse.

And while the ESL would have been worse, European soccer in its current state is not a great system either. The governing bodies of soccer, like FIFA and UEFA, have an embarrassing record of corruption scandals and human rights abuse. The ESL incident exposed further hypocrisy, as even when the news of the Super League was breaking, UEFA formally announced the new Champions League format would add two slots awarded by historic performance. This allows the top teams to almost guarantee that they will qualify for the Champions League. This is, in essence, the Super League being slipped in under our noses. UEFA, in their official statement, mentioned that club executives were consulted in introducing the new format; managers, players and fans are notably absent from the statement. The three pillars which make soccer possible were left out of the biggest decisions.

This lack of democracy is even more apparent in the national leagues. Newcastle Utd. FC fans have been protesting their owner for years to no avail. Arsenal FC owners have practically said they do not care about the success of the club on the field. Manchester United fans have been protesting the takeover by the Glazer family since day one. It would also be naive to think this is an issue with these particular owners. These issues are structural: the system favors big clubs and their big investors, and like any big corporation, these boardrooms will always make decisions that maximize profit to the detriment of the communities they pretend to serve. This disenfranchisement of the fans, alienation experienced by players and staff, lack of transparency on part of owners and their executives- this is part and parcel of neoliberalism that plagues the sport.

What was incredibly tragic about the ESL was not just how much it would have funneled wealth to big clubs, upending the entire pyramid structure that distributes wealth (however little) down to the very grassroots level. No, what’s absolutely gut wrenching is how a few ultra-rich men thought they could push for something that is widely unpopular among fans, media, and players alike. A few boardroom members who have no participation in the sport beyond their desire to make more money could threaten the fabric of the game, whereas fans, players, ex-players and pundits–people who live and breathe this game–have virtually no say. These clubs are community assets with over 100 years of history in their respective cities that matter to their community. But capitalists will take that away in a heartbeat. There is a cruel irony in the banners that read “Football (soccer) is Nothing without Fans” that were flying at Old Trafford while their owners were preparing to launch the ESL without the fans’ consent.

Made by the poor, and stolen by the rich indeed.