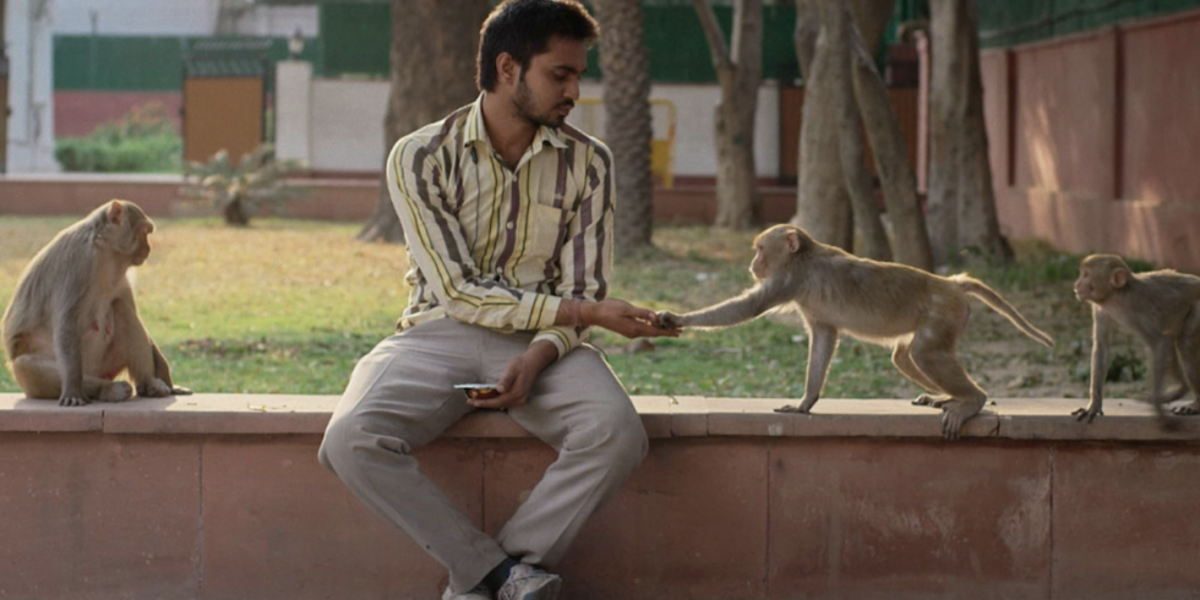 In an interview with Prateek Vats, the director of the recently-released Hindi movie Eeb Allay Ooo!, he expresses an anxiety about the depoliticization of films in India. The ideological function of all mass media under the current BJP regime has been to inculcate an unquestioning patriotism. A work of popular art like Eeb Allay Ooo is marked by its uniqueness by pushing back against patriotic narratives and its exploration of labour relations.

Set in central Delhi, the film tells the story of Anjani, a migrant worker from the eastern state of Bihar, who lives with his family on the outskirts of the city, and has the job of driving monkeys away from the red sandstone abodes of central Delhi’s bureaucratic divines. The monkey population creates a menace for the governmental functionaries who live in this well-to-do part of the city. Anjani’s “monkey-repeller” job, however, is not as easy as it seems, for these monkeys are well-versed in interacting with humans, and intimidating them.

Most reviews of this movie coyly side-step the question of its barbed political criticism, focussing on the aesthetic finesse with which Vats’ film delivers the message. While these reviews acknowledge that the movie thematically deals with questions of nationalism, religious extremism and bigotry, and the arrogance  of the middle-class and the elites, the director himself has stressed an entirely  different element: that of contractual labour. In an earlier interview from 2019,  when the movie had not been released to the public,Vats said:

“I have been fascinated with this system of contracts by government  institutions and private parties … These people might work for the  government, but they are not recognized as government employees, and they  don’t get a pension or other benefits. You can get them to do anything. No  strict qualifications are needed for the job. It depends on how much you can  bend and accommodate.”

It is this economic critique that rests right below the surface of the laudable and brave political critique of right-wing fanaticism and religious obsession that the movie has been praised for. Indeed, contractual labour, in its particular  manifestation in India, has been in the limelight in the last year, right after the  movie’s release.

In March 2020, the government of India declared a sudden and immediate 21-day lockdown that compelled millions of migrant workers, most of them contractual labourers, across the country to leave for their homes. The event only showcased the state of extreme precariousness that contractual workers navigate in India. In the wake of this move, and the developing humanitarian crisis, the government at the end of March in 2020 directed employers to continue paying salaries to their contract workers and to not fire them. Soon, however, employers and businesses opposed this move as being anti-business.

The opposition from the capitalist class was translated into legislative action by the BJP-led government of  Uttar Pradesh, the most populous state in the country, when it scrapped all but three of its thirty eight laws that had guaranteed some labour protection. Among the laws scrapped for three years in a bid to “revitalize” the economy was of course, the Contract Labour Act. Madhya Pradesh, another state with a BJP government, followed suit, amending a majority of its labour laws. For instance, the Contract Labour Act is amended, “contractors will have to  register only if the number of workers is 50 instead of the current 20.”

Eeb Allay Ooo’s depiction of the plight of contract workers is an apt narrative for the current economic state facing so many workers. The film being made right before, and released right after, the onset of the intensification of the state’s attacks on labourers, the film  uses the “monkey” as an empty symbol that renders sensible the economic absurdities pushed by a government that is determined to put profits before people.

It is not only that the precarity and cruelty faced by the contractual migrant workers reaches a level of dehumanization that resonates with their jobs — of  driving away monkeys. It is rather that the monkey is an image here charged with the economic feeling of contemporary India. Anjani’s relationship with the monkeys leads to situations that evoke the general precariousness of the contractual work performed by exploited migrants. Thus, we can say that it is this symbolic monkey that draws vast sources of labour from the countryside, and then renders them “unskilled” by putting their labour-power to such menial ends. The monkey  produces demeaning forms of employment and which are routinely attacked by the ruling class around them.

Indeed, Mahendra, the skillful monkey repeller who teaches the newcomer Anjani the tricks of the trade, is ultimately murdered by a mob for accidentally killing a monkey.  The monkey compels the workers to speak (the words “eeb allay ooo” are a  warning call for the monkeys), but in words that render them objects of curiosity, mockery, or disdain, alienated from the world around them — a “reverie of distant  drums” as one character notes. In another instance, it is while hopelessly searching for jobs online that an irritated Anjani unfairly lashes out at his helpful romantic interest, Kumudh, leading to the end of their relationship.

The monkey restricts any and all workers’ initiatives — Anjani is harshly reprimanded for using photos of langurs, an animal that the monkeys are scared of, in order to ease his strenuous work. He is fired for dressing up as a langur, another trick that helps him drive monkeys away. And, with the automatized langur we see near the end of the movie, it keeps them under the constant threat of being rendered “obsolete,” and thrown back into the reserve army of labour — unemployment.

The actual forms of the contract worker’s relationship to their work, which Vats depicts as a “monkey” in his movie, are diverse; one more dreadful than the next. One need only scan the pages of a publication like the People’s Archive of Rural India (PARI), to find similar stories of the daily struggles of contractual, migrant workers all over India. For example, you would read about how Ashok Taare, the BMC sanitation worker in Mumbai, who, like many of his co-workers contracted COVID on the job and was provided no medical care and consequently passed away, or that of the 24-year-old Vivek Sill, a migrant worker from Hooghly district in West Bengal who, despite working on multiple glitzy construction projects in Andhra Pradesh, was stuck in a cycle of contractual employment.

Eeb Allay Ooo clearly reflects this precarious reality of contract labour that is so pervasive across South Asia and much of the world.