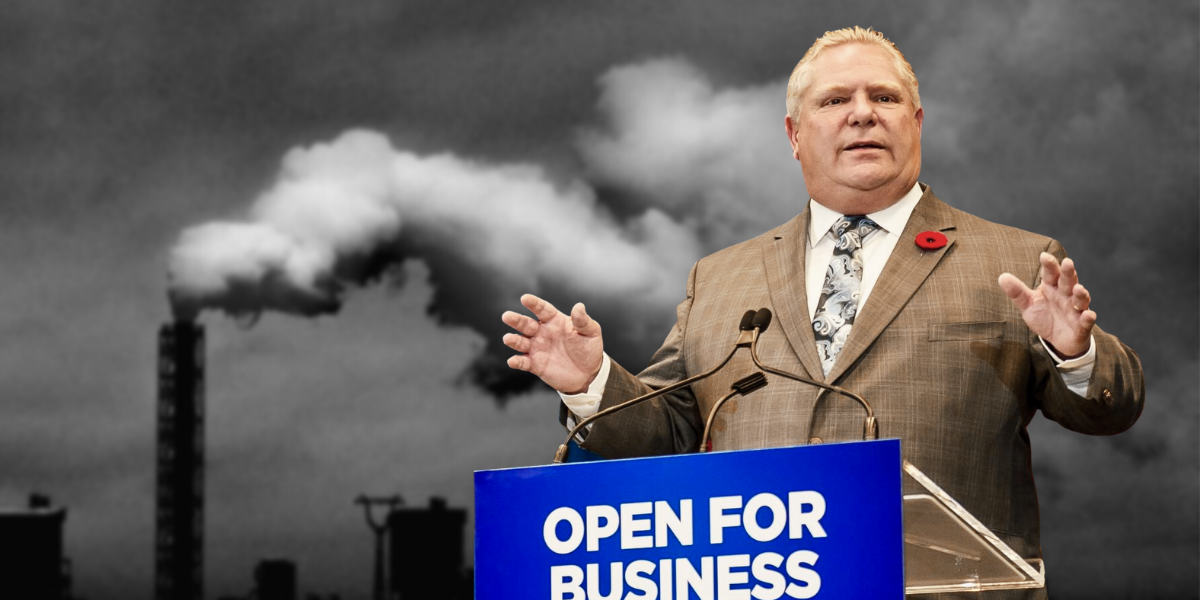 We are heading into the Ontario election on the brink of ecological and societal collapse. Another four years of Ford will worsen both the climate crisis and strengthen the right-wing, but it is up the movements outside the legislature to provide real solutions.

As biodiversity plummets worldwide due to rising temperatures, we are starkly reminded of our current economic systems’ adamant disregard for our deeply important relationships with each other and our ecology. Under the extractive, exploitative wheel of capitalism we have seen the worldwide insect population decrease by 75% in the last 30 years. Insects pollinate the plants, sustain our crops and live in balance with the whole of our ecosystem.

In Ontario, we have seen a massive increase in wildfires, putting communities and wildlife alike at risk. This coming summer is predicted to be even riskier still. These are just telltale signs of the devastating famines, natural disasters and wars that would come upon our communities without decisive climate action.

An escalating climate crisis could accelerate racist and nationalist political tendencies. This would be a future in which the rich further militarize borders, escalate imperial adventures abroad and exploit the last of our earth’s resources including water, air and soil. We have already seen how climate catastrophe and environmental racism disproportionately impacts low-income, Indigenous and racialized communities and communities from the Global South.

Ford putting profits before people and the planet

Doug Ford’s record and climate plan make it crystal clear that we are not all in this together.

While in power Ford froze the minimum wage and blocked legislation to grant workers protected sick days 25 times. In the middle of the pandemic he put a wage cap on public sector workers and underfunded and privatized healthcare, while big businesses saw unprecedented profits. Moving forward Ford has no plan to change with no plans to ensure equal pay, benefits and protection for part-time, contract or gig workers, or increase access to unions. All these policies disproportionately affect low wage and low carbon workers—from farm workers to care workers—whose jobs are a matter of social justice, racial justice and climate justice.

Similarly, Ford’s broader climate policies will be equally devastating. During the pandemic Ford elected to suspend key sections of the Environmental Bill of RIghts leading to less transparency and accountability for his actions. Most prominent is Ford’s plan to enrich his developper partners by building massive highways through the greenbelt. Like his policies supporting for-profit long-term care despite their high death toll, Ford’s highways will seriously endanger ecologically critical wetlands. This will cost $8.2 billion and will only save commuters 30-60 seconds on average, rather than expanding local green jobs.

Even more ominously, under the future Ford government, Ontario’s carbon emissions are predicted to increase by 400% due to his failure to invest in green energy alternatives.

From reaction to solidarity

Alternatively, tackling the climate crisis head-on is an unprecedented opportunity for solidarity. This past May Day, workers and climate activists marched together to demand liveable working conditions as well as a just transition towards good green unionized jobs. Some have compared the swift climate action needed to that of the government during the second world war. A key characteristic of this time was a huge increase in social services, including food stamps, and increases in welfare spending. In order for communities to commit to tackling a collective issue like climate catastrophe they need to know that ‘we are all in this together’.

We have plenty of solutions to tackle climate change, but they need to be implemented quickly. It is hard to overstate how critical and time sensitive this issue is. It’s important to challenge Ford at the ballot box, but what matters most is the movement outside the legislature. This was one of the lessons on the earlier environmental movement which pushed the US government to create the Environmental Protection Agency. As union activist Anthony Mazocchi explained, “What’s incredible was the guy who was president then was Richard Nixon, which shows that when you build a big movement from down below, regardless of who’s in the White House, you can bring about change.”

To tackle the climate crisis and build a world of social justice that we urgently need let’s challenge Ford at the ballot box and keep building the climate justice movement beyond the election.