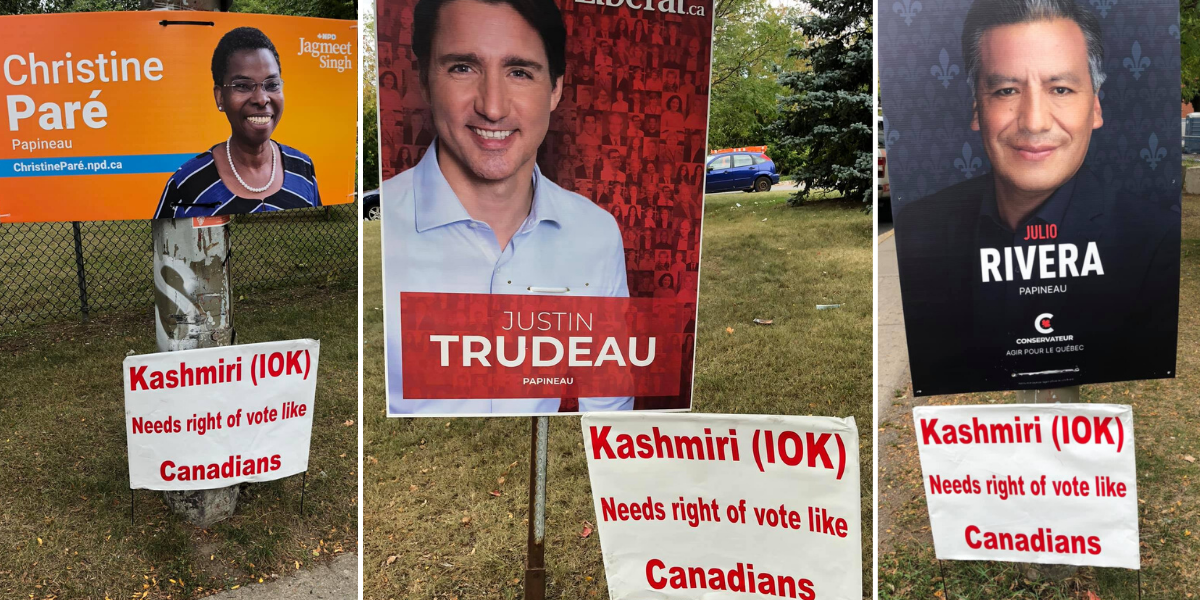 During #Exln44, several hundred people from across Canada have pledged to be in touch with candidates from all parties in almost one-third of the federal electoral ridings about the grave situation in Kashmir.

These constituents have been asking what candidates will do if elected, to ensure that Canada holds India accountable for its settler-colonization happening in Kashmir.

Over the last week, signs saying that Kashmiris need the right vote like Canadians have also been appearing across the country. A social media post indicates people are putting these signs to make those electoral candidates aware that of the need  to “stand up for Jammu Kashmir” and “try to work with international powers to give the right to vote for them-self and free Kashmir of the genocide from India.” The post continues saying “We all talk about human rights all over the world but when it comes to Kashmir we are silent?”

Indications are these are being put up by individuals in the hope to “wake up the government to take a stand for Kashmir.” Signs have been spotted including in and around Montreal, Ottawa, Cornwall, Calgary and the greater Toronto area.

Jammu and Kashmir is an internationally recognized disputed territory.

On March 31, 2020, the Indian government introduced the new domicile law. This law was aimed at a demographic change that takes the land and resources from the Indigenous population of Jammu and Kashmir. India’s domicile law is counter to the United Nations Security Council resolutions 47 (1948), including subsequent resolutions that call for a plebiscite to determine the future of the disputed territory. Canada’s United Nations representative, Andrew McNaughton took the lead as the president of the United Nations Security Council at the time to put Resolution 47 in place.

The federal parties and Kashmir

At the start of #Exln44 a coalition of advocacy groups had contacted federal party leaders and candidates to ask questions about Canada’s role in supporting the self-determination rights of Kashmir’s people. These coalition efforts have resulted in several NDP and GPC candidates, as well as the Bloc Québécois (BQ)  party indicating that Canada must take action to support the legitimate right of self-determination of the people of Jammu and Kashmir.

The BQ revealed in their response that they have written to the High Commissioner of India to express their disapproval of the repeal of Article 370 of the Indian Constitution, and that they intend to continue to denounce this clear violation of citizens of Jammu and Kashmir.

The BQ indicated and referenced in its response:

In addition to those Kashmiris who have been languishing in jails for years after expressing their dissent to India’s occupation, an estimated 4,000 to 13,000 Kashmiris have been detained since August 5, 2019. The BQ also has indicated that they always denounce political imprisonment and they won’t hesitate to do the same for Kashmiris.

Yavar Hameed, the NDP candidate for Ottawa West-Nepean indicated “Domicile and settlement colonization has caused immense hardship to the people of Jammu and Kashmir. India’s Domicile Law reverses many of the withdrawal efforts included under UN Resolution 47. I plan to leverage Canada’s relationship with India to uphold the Rule of Law and the fundamental human rights of the people of Jammu and Kashmir.”

Hameed responded that “the NDP stands in solidarity with the people of Jammu and Kashmir and intends to use all available political platforms permissible under the Rule of Law and diplomatic means and ways to facilitate a peaceful resolution to this issue. We will support efforts by Canada to:

Responses from several other NDP candidates included support for the self-determination and justice for the people of Kashmir. Avneet Johal candidate from Surrey-Newton office indicated that he has “spoken many times about the problematic and dangerous nature of the Domicile Law.”

Green Party candidate, Felix Kongyuy for Surrey Centre indicated that if elected he would work with other parties in the parliament to ensure the UN Resolution 47 (1948) is implemented.

Taha Ghayyur from Justice for All Canada, one of the groups involved in the questionnaire sent to the parties and candidates indicates, “The overall situation has dangerously worsened as India continues to move its population into occupied Kashmir, confiscate land and resources, oppose the rights of Kashmiris and silence any resistance through repressive means.”

Ghayyur continued “As UNHRC’s Michelle Bachelet said during this week’s Human Rights Council session, mass detention and restrictions on free speech continue to threaten the safety and security of Kashmiris. The government’s concerning use of legal instruments to control the population is alarming and impossible to ignore.”

Standing up for human rights

In a recent press release Just Peace Advocates indicated that “It is important that the Canadian government is held accountable in its compliance with international legal obligations, as part of Canada’s ongoing relationship with India, especially in trade, defense, and counterterrorism.”

A spokesperson from Canadians for Peace and Justice in Kashmir (CPJK) said  “we hope other parties and individual candidates on the other federal parties will indicate how they would work proactively to make Canada take leadership in its relations with India, and at the UN, to implement self-determination for the people of Jammu and Kashmir.”

Article 49 of the Fourth Geneva Convention states, “the occupying power shall not transfer its own civilian population into the territory it occupies;” and under Article 1 all High Contracting Parties, which includes Canada, are required to take action to ensure respect for the Convention “in all circumstances.” Thousands of Canadians let the Canadian Government know this through parliamentary petitions sponsored by three political parties, the Liberals, NDP and Conservatives, in the fall of 2020. As reported earlier in an article in Spring Magazine the government response was less than adequate.

It is expected that elected officials will be hearing more after the election in regard to Canada’s accountability to hold India accountable for the ongoing settler-colonization in Kashmir.