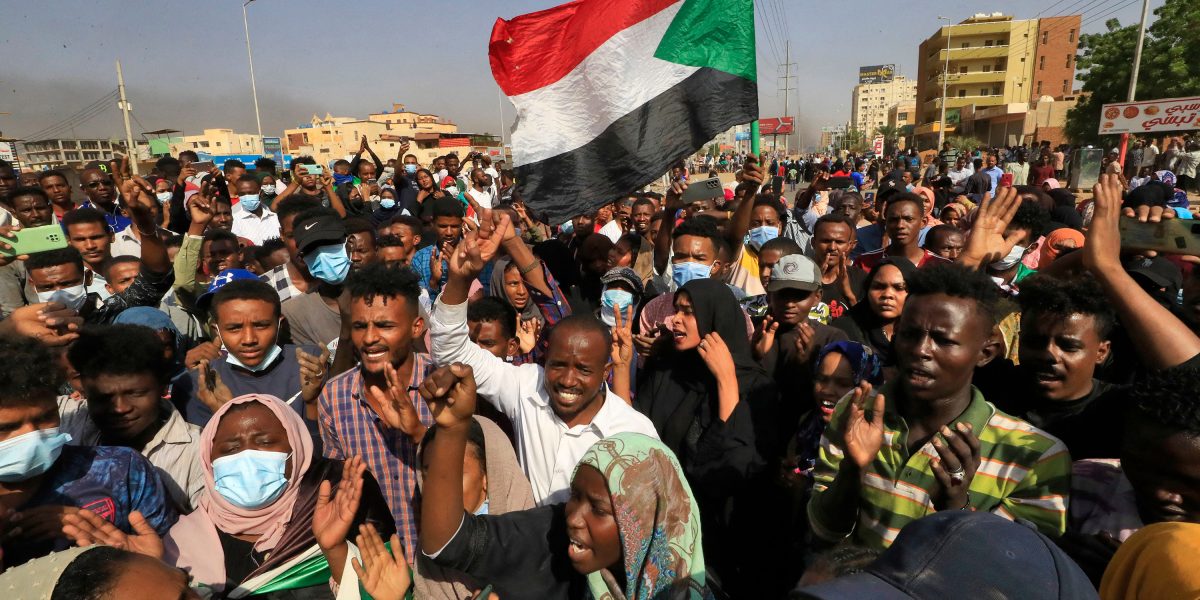 On December 19, people across Sudan took to the streets to mark the anniversary of the revolution that toppled longtime President Omar al-Bashir in 2019 and once again reaffirm their rejection of the army’s insistence to stay in power. The demonstration was part of a series of protest actions held regularly since October 25, when the Transitional Military Council (TMC) carried out a coup against the civilian government.

They have persisted even after the military, headed by General Abdel Fattah al-Burhan, struck a deal with Prime Minister Abdalla Hamdok on November 21 to reinstate him and task him with forming a new “technocratic cabinet”. This is because this arrangement allows the military to continue interfering in the affairs of the government.

The Sudanese people see in this deal the same flaws that plagued the 2019 Constitutional Declaration, which was signed between the Sudanese military and the Forces for Freedom and Change (FFC), the umbrella coalition of civilian forces that led the uprising against al-Bashir. The problem with the 2019 agreement is that – just like the present one – it allowed the military leadership to actively undermine the transition to civilian rule.

Unfortunately, important players within the international community are making the mistake of supporting this new al-Burhan-Hamdok deal. What they need to understand is that this agreement will derail the Sudanese democratic transition just as the 2019 one did.

The Constitutional Declaration was supposed to guide the transition period to full civilian rule, in which civilian forces would take full control of the levers of the state from the military. While it ushered in a government formed by the civilian FFC, it also set up a Sovereign Council, chaired by Burhan, which had executive powers superseding in some cases the government’s.

The declaration allowed the TMC to maintain power over the armed forces and to appoint the ministers of defence and interior as well as five of the 11 members of the Sovereign Council. The declaration also lacked the provisions to enforce civilian oversight of the military. It tasked the security sector with reforming itself, which the military had no motivation to do.

The document had no enforceable mechanism to ensure accountability for the crimes committed by the security forces or create safeguards against further repression. It did not curb in any way the ability of the military to intervene in civilian politics or its problematic relations with foreign patrons. This exposed the country to foreign intervention and counter-revolutionary efforts, especially from the Gulf.

A clear example of that is the way negotiations were held with the various rebel groups active in the rural areas of the country. With foreign backing, especially from the United Arab Emirates, top Sudanese generals sidelined the civilian forces in the government to start direct negotiations with rebel forces. The resulting deal, called the Juba Peace Agreement, solidified the position of the generals and ensured rebel loyalty.

The power imbalance between the civilian forces and the military also created tension between the FFC and the Sudanese grassroots that participated in the revolution. While the flaws of the civilian-military arrangement were clear to Sudanese protesters from the get-go, politicians, many of whom with strong ties to the regional powers, insisted on downplaying these concerns.

The FFC leadership promoted the Constitutional Declaration as the only realistic path to stopping the bloodshed in Sudan. They claimed that the power of the protests would force civilian oversight over the military which they repeated in their public speeches and interviews during the negotiations and the months that followed signing the declaration.

Over the following two years, the government worked actively to undermine grassroots organisations, unions, and resistance committees (RCs), which were formed during the revolution in city neighbourhoods, towns and villages across the country to organise and coordinate protests. Over time, the RCs evolved into localised centres of political activity and dissent, which is why the government tried to marginalise them and depoliticise their work.

There were also government attempts to stifle protests with the argument that they were destabilising the country, weakening civilian power and potentially inviting a military takeover.

Instead of heeding the demands of the Sudanese people for civilian rule, civilian leaders in the transitional government chose to rely on the support of the international community. They decided to appeal to foreign powers and institutions by adopting policies in line with their interests. These included taking steps towards economic liberalisation, such as removing commodity subsidies, as part of an IMF-backed reform programme.

Legislative changes promoting these policies were accelerated ahead of the Paris conference on Sudan hosted by French President Emmanuel Macron in May this year. The event was attended by heads of state, investors and representatives of the World Bank, the IMF and the Paris Club, a group of officials from creditor countries, and was supposedly intended to encourage investment and alleviate Sudan’s foreign debt.

These legislative changes led to the removal of subsidies for basic goods, which was a deeply unpopular move. Sudanese economists had predicted the disastrous consequences of these neoliberal policies for the majority of the population, but nevertheless, the government proceeded with them, provoking even more social upheaval.

This gave the perfect opportunity for the military to intervene. The TMC presented the economic crisis as an example of mismanagement that only a coup could correct. In the weeks leading up to the coup, some of the rebel signatories of the Juba Peace Agreement led their supporters in protests against the civilian government, calling for a military takeover. They were also the first to announce their support for the TMC when it deposed Hamdok.

By then many Sudanese people were aware of where the country was heading as a result of the failure of the 2019 deal. That is why RCs organised protests calling for an end to the “partnership” between the FFC and the military. But Hamdok appeared not to have heard their calls.

On November 21, he proceeded to conclude an agreement with the TMC with the same flaws as the 2019 Constitutional Declaration: no checks on military power and no independence of the civilian government from military control. The new deal further solidifies military interference in political decision-making and protects military investments and commercial relations from public oversight.

The Sudanese people know that this deal, too, will fail and that is why the RCs continue to organise protests – including the December 19 one – demanding the total removal of the military from Sudan’s political arena as the only path to sustainable peace and stability.

Unfortunately, the responses from international diplomats to the November 21 deal show that the international community has not learned any lessons since 2019. A recent statement by the United Nations Secretary-General António Guterres supporting the deal and dismissing the demands of the protesters has made the body and its representatives in the country a target of public anger.

A December 4 statement by the RC of Mayrno city in the state of Sinnar reflected the Sudanese public’s general attitude towards the UN. It declared that the secretary-general’s statement renders the UN no longer “the appropriate channel for relations [between the Sudanese people] and the rest of the world” and rejected an invitation to meet the UN special representative to Sudan.

US Secretary of State Antony Blinken also welcomed the November 21 deal, calling it an “important first step” and called for the release of political prisoners and the lifting of the state of emergency in place since the coup in order to build confidence with the public. This statement, too, was perceived as completely tone-deaf and utterly irrelevant to the reality on the ground in Sudan.

No deal that preserves power of military

No deal that preserves the power of the military can be realistically sustained. Sudanese protesters have understood that all along. It will benefit all parties if the international community takes the time to understand this too.

Any meaningful discussion on achieving peace and stability in Sudan must address military-economic interests and power and foreign intervention. That means putting military investments under the control of a civilian government and ensuring that foreign assistance is detached from attempts to undermine the Sudanese revolution. Governance with adequate public oversight and democratic decision-making must be pursued and the socioeconomic demands of the general population must be addressed, not overlooked in pursuit of economic policies imposed from abroad.

If the international community continues to support a repeat of the mistakes of 2019 in the form of the new Burhan-Hamdok deal, it will be paving the way for another failure that threatens Sudan’s chances of a peaceful future and will further diminish global faith in the legitimacy and efficacy of international organisations.

This piece was first published on Al Jazeera