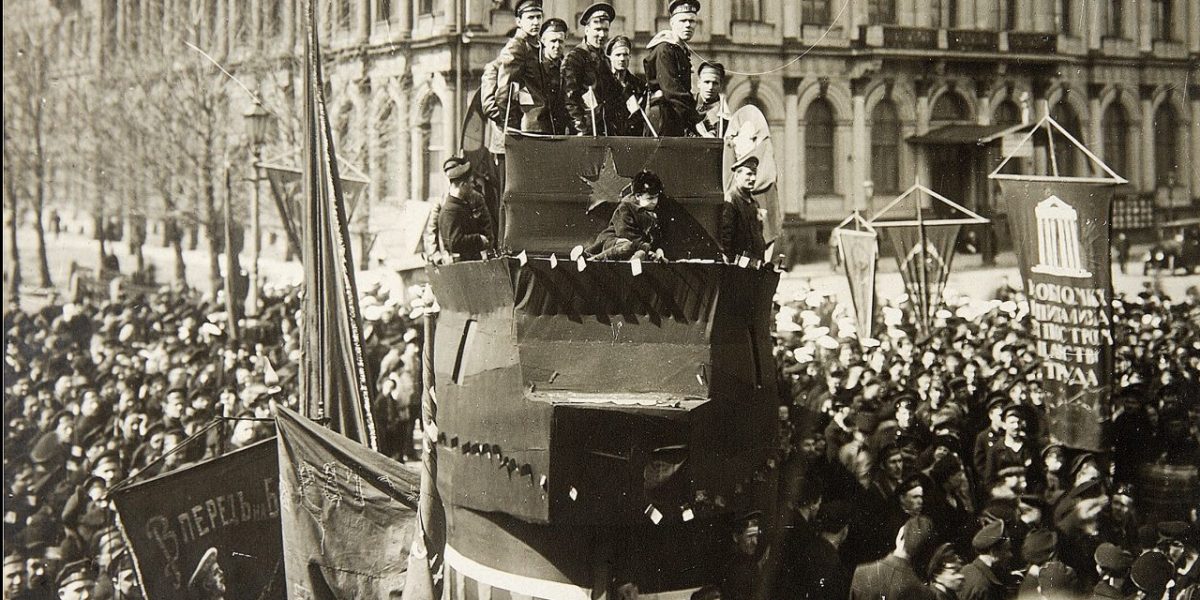 John Reed (October 22, 1887 – October 17 1920) was an American communist and journalist. He wrote about labour struggles, the Mexican revolution, the Great War and most famously the Russian Revolution. After witnessing the Russian Revolution first-hand he wrote his most well-known book, Ten Days that Shook the World. As Reed said of his book, “This book is a slice of intensified history—history as I saw it. It does not pretend to be anything but a detailed account of the November Revolution, when the Bolsheviki, at the head of the workers and soldiers, seized the state power of Russia and placed it in the hands of the Soviets.” To mark Reed’s birthday Spring presents a passage from his Reed’s seminal work.

We sallied out into the town. Just at the door of the station stood two soldiers with rifles and bayonets fixed. They were surrounded by about a hundred businessmen, government officials and students, who attacked them with passionate argument and epithet. The soldiers were uncomfortable and hurt, like children unjustly scolded.

A tall young man with a supercilious expression, dressed in the uniform of a student, was leading the attack.

“You realise, I presume,” he said insolently, “that by taking up arms against your brothers you are making your-selves the tools of murderers and traitors?”

“Now brother,”answered the soldier earnestly, “you don’t understand. There are two classes, don’t you see, the proletariat and the bourgeoisie. We——”

“Oh, I know that silly talk!” broke in the student rudely. “A bunch of ignorant peasants like you hear somebody bawling a few catch-words. You don’t understand what they mean. You just echo them like a lot of parrots.” The crowd laughed. “I’m a Marxian student. And I tell you that this isn’t Socialism you are fighting for. It’s just plain pro-German anarchy!”

“Oh, yes, I know,” answered the soldier, with sweat dripping from his brow. “You are an educated man, that is easy to see, and I am only a simple man. But it seems to me——”

“I suppose,” interrupted the other contemptuously, “that you believe Lenin is a real friend of the proletariat?”

“Yes, I do,” answered the soldier, suffering.

“Well, I don’t know much about that,” answered the soldier stubbornly, “but it seems to me that what he says is what I want to hear, and all the simple men like me. Now there are two classes, the bourgeoisie and the proletariat——”

“You are a fool! Why, my friend, I spent two years in Schlüsselburg for revolutionary activity, when you were still shooting down revolutionists and singing ‘God Save the Tsar!’ My name is Vasili Georgevitch Panyin. Didn’t you ever hear of me?”

“I’m sorry to say I never did,” answered the soldier with humility. “But then, I am not an educated man. You are probably a great hero.”

“I am,” said the student with conviction. “And I am opposed to the Bolsheviki, who are destroying our Russia, our free Revolution. Now how do you account for that?”

The soldier scratched his head. “I can’t account for it at all,” he said, grimacing with the pain of his intellectual processes. “To me it seems perfectly simple—but then, I’m not well educated. It seems like there are only two classes, the proletariat and the bourgeoisie——”

“There you go again with your silly formula!” cried the student.

“——only two classes,” went on the soldier, doggedly.

“And whoever isn’t on one side is on the other…”