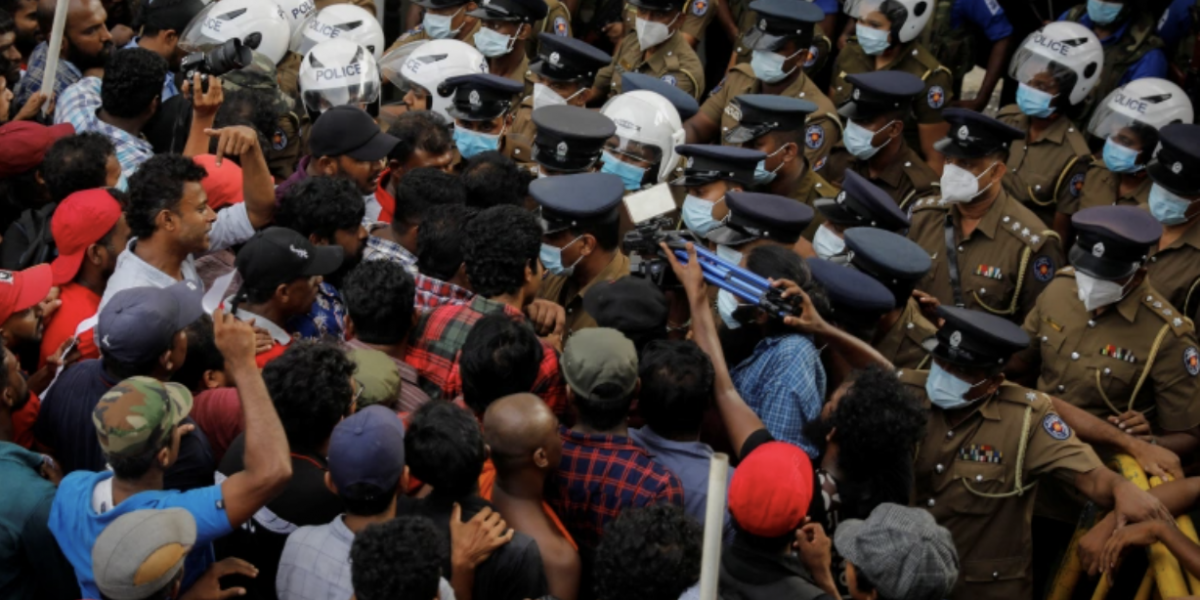 In early April, hundreds of thousands of primarily Sinhala protestors filled the streets of Colombo, enduring tear gas and water cannons, as they inched closer to the presidential compounds, demanding the resignation of Sri Lanka’s President, Gotabaya Rajapaksa.

With zero reserves, the government defaulted on its loans in April, admitting that it could not pay back 51 billion USD in foreign debt. By May, the island nation struggled to import essential items such as medicine and fuel, pushing the island’s people into action as they faced starvation. Wave after wave of protesters overran the President’s House, forcing Rajapaksa to flee Sri Lanka and resign.

Gotabaya Rajapaksa was once the all-powerful head of the armed forces under the government of Mahinda Rajapaksa, his elder brother. For nearly two decades, the Rajapaksa brothers have dominated Sri Lanka’s politics after orchestrating the Tamil genocide of 2009. Sri Lanka killed at least 75,000 Tamil civilians—with over 120,000 still missing—armed with US training, intelligence, and weapons.

In the wake of the Rajapaksas’ demise, parliament appointed Ranil Wickremesinghe as the interim President. But the new government has escalated attacks on the movement’s leaders, signing detention orders against student activists, teachers, and civil society leaders. The nephew of former President J.R. Jayawardene, Wickremesinghe has served six terms as the country’s prime minister and ran for president twice over the course of 45 years.

The arrests by the new government are part and parcel of a national security state governed by emergency regulations and anti-terrorism laws first used to arrest, detain, and murder thousands of Tamil youth. These laws were eventually unleashed on the Sinhala-dominated south, too, marked by the abduction and killings of nearly 60,000 Sinhala people.

Irrespective of the government of the day, Sri Lanka’s political and economic crisis is rooted in the Sri Lankan state, marked by decades of genocide and neoliberalism.

While earlier concepts of nationality signified differences in spoken languages, literature, and cultural products, the idea of ‘nationality’ emerged in 17th-century England and reflected the social geography of Europe. The Treaty of Westphalia, established to thwart bitter religious conflicts in Europe, set up a system of states where each state was responsible for its internal affairs.

With the development of capitalist-nation states, colonized people were forced into new nation-states—with their languages, traditions, and cultures extinguished or submerged within the new framework of national majorities and minorities.

Ceylon (later renamed Sri Lanka in 1972) was transformed, under British rule, into a plantation economy focused on exporting tea and coffee to global markets. Sri Lanka’s independence in 1948 came against the backdrop of decolonization in Africa, Latin America, the Middle East, and Asia.

As the sun set on the British Empire, Britain sought new ways to keep its grip on its colony. The British (and later the Americans) focused on the strategic military asset of the island’s eastern port Trincomalee, the naval command hub for the eastern British fleet during the Second World War. The empire created Sri Lanka to maintain its grip on Trincomalee and the Indian Ocean by merging disparate regions and nationalities—Tamil and Tamil-speaking Muslim people in the northeast, with the majority Sinhala community in the south.

Like other parts of South Asia, decolonization in Sri Lanka amounted to a power transfer to national elites instead of a redistribution of power to the masses. The British nurtured a homegrown elite—assuming power without even the pretext of an anti-colonial struggle— to maintain its sphere of influence.

Since independence, both the right-wing United National Party (UNP) and the left-leaning Sri Lanka Freedom Party (SLFP) have mobilized anti-Tamil chauvinism to outbid one another for the Sinhala vote. Both parties deployed competing nationalisms to consolidate their authority over the new island nation by marginalizing Tamils in governance, land rights, access to employment, and education.

The state entrenched its sovereignty by building armed Sinhala settlements in the northeast, seeking to alter the region’s demography and dismantle any claim of Tamil nationhood.

The freedom of the Sinhala people is interconnected with the national liberation struggle of the Tamil people.

The election of J.R. Jayawardena, the current President’s uncle, in the late 1970s marked a shift towards neoliberalism in Sri Lanka, long before any other country in South Asia. The island was carved into free trade zones, while Jayawardena strangled the trade union movement by sacking 40,000 workers. The government eroded the welfare state, replacing it with a national security apparatus to back the country’s “open economy reforms,” spearheaded by the armed forces and driven by perennial states of emergencies.

The security forces used Jayawardena’s Prevention of Terrorism Act (PTA), modelled after legislation in apartheid South Africa, to detain Tamil people without laying charges or producing them in the courts. Under state detention, security forces executed thousands of young Tamils.

Sri Lanka’s economic rise, bolstered by Western capital, deflated by 1982 amidst a global economic downturn sparked by higher interest rates. The storm came strong with the longstanding promise of individual freedom and prosperity unfulfilled. Jayawardene’s government deflected attention away from its fiscal problems by organizing the July 1983 riots. The massacre killed over 3,000 Tamil civilians and displaced over 150,000.

Jayawardene revealed his strategy to a London-based reporter: “I am not worried about the opinion of the Jaffna people. We cannot think of them. Not about their lives or their opinion about us…. The more you put pressure in the north, the happier Sinhala people will be here.”

The brutality nurtured in the northeast was soon unleashed on Sinhalese youth in the southern countryside. While the state initially deployed the PTA to contain the Tamil liberation struggle, Sinhalese activists who ignored it set the stage for their own repression.

Even as government violence intensified in the northeast, death squads dumped bodies onto the streets and rivers in the south. Jayawardena claimed his mission was to demobilize the Janatha Vimukthi Peramuna (JVP)—an insurgency group that killed critics in the southern workers’ movement and eventually perpetuated anti-Tamil chauvinism. Over 60,000 Sinhala workers and peasants disappeared.

In Sri Lanka, costs are among the lowest in Asia, while labour productivity ranks among the highest. A strong militarized state provides an insurance policy to multinational corporations and international lenders that Sri Lanka maintains control of its internal political strife. Sri Lanka’s ruling class wants the world to know it’s open for business.

Spanning over 2,000 days, Tamil mothers lead sit-ins and marches demanding justice for their missing and murdered loved ones. And, hundreds of thousands of Tamil people shut down the northeast in general strikes and protests, demanding an end to the military occupation of their land.

The occupation of the northeast dictates Sri Lankan policy after the 2009 genocide. Tamil people continued to be displaced from their ancestral homes and denied a livelihood as the armed forces controlled commercial ventures such as agriculture and tourism.

For instance, in Mullaitivu there is one Sri Lankan soldier for every two Tamil people. 60,000 soldiers (fully a quarter of Sri Lanka’s armed forces) occupy a district with only 0.6 percent of the island’s population. From 1983 to 2020, Sri Lanka spent 33.76 billion USD on “defence” and military spending. Twelve years after the 2009 genocide and the formal end of the civil war, Sri Lanka’s defence budget was double the funding for health and education. Its proposed 2022 defence budget of 1.86 USD billion continues to eclipse social spending. The 2022 defence budget  is a 14 percent increase from the previous year.

Meanwhile, Wickremesinghe’s government is negotiating a bail-out from the International Monetary Fund, ensuring more cuts to public services as austerity deepens poverty on an island where 61 percent of families are forced to cope with food insecurity, according to the United Nations.

What is to be done?

The recent anti-government movement in Sri Lanka had no apparent political or ideological cohesion (the one thing everyone agreed on was Rajapaksa’s departure). Still, a small but significant section of the movement emerged that linked the government’s violence against southern protestors to the protracted state violence in the northeast. The Ceylon Teachers Union (CTU), maintaining its decades-long solidarity with the Tamil liberation struggle, educated Sinhala protestors on the streets about the Tamil struggle and the state’s divide-and-conquer strategy.

The CTU’s General Secretary, Joseph Stalin, helped organize general strikes in 2021, which stopped the government’s plan to militarize university education. He was arrested on August 8, 2022, by over 25 police officers for participating in the spring protests against Rajapaksa and his successor. Although Stalin was released on bail, he is regularly summoned to police stations to face new charges.

In turn, the Tamil National People’s Front (TNPF) rejected an invitation to meet with Wickremesinghe on August 10, asserting that the party would not meet him until the government unconditionally released the CTU’s General Secretary and all southern protestors. The TNPF has made significant inroads in the south, with many of the organization’s speeches translated into Sinhala.

These actions pave the way for a solidarity that elevates national liberation in the northeast and genuine democracy in the south. Tens of thousands of people have now developed an experience of mobilizing for protests and strikes and understand the power of solidarity. As divergent as its participants prove, the protest movement has created a laboratory for radical self-organization from below.

But the divisions Sri Lanka’s rulers created have long raised barriers to solidarity between the Tamil and Sinhala people. The Sinhala people have maintained their side of the wall by accepting the anti-Tamil violence conducted in their name. Although the Tamil people may have supported the recent protest movements, it’s not lost upon them that many of the same Sinhala protestors in Colombo valourized the Rajapaksas as ‘war heroes.’

The national ruling class contained workers’ uprisings amongst the Sinhala people and isolated the Tamil people’s liberation struggle through genocide and military occupation. Sadly, anti-Tamil chauvinism has weakened the political strength of working-class people across the whole of Sri Lanka.

Today, the ideological foundation of the state is vulnerable as the island grapples with the worst economic crisis in its history. Now is the time to view our struggles through a bold new light of solidarity. A solidarity that knows that Sinhala people cannot win without the freedom of the Tamil people; solidarity that centres liberation in the northeast while amplifying voices of critical resistance in the south. The fates of our peoples, Tamil and Sinhala, are deeply intertwined.

And so, too, should our struggles be.

Spring Magazine and Journalists for Democracy in Sri Lanka jointly published this article.