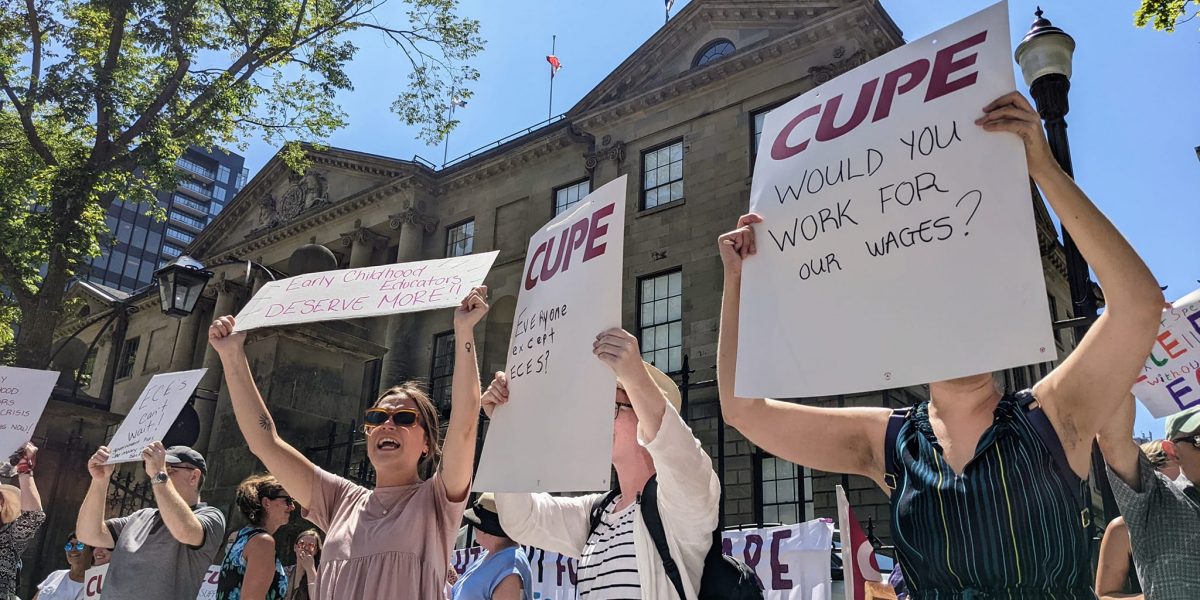 The federal government’s historic funding deals with the provinces to deliver affordable, non-profit child care to parents could mean a massive expansion to public services, the likes of which has not been seen in decades. In the face of this expansion, private operators in Nova Scotia continue to lobby to be able to expand for-profit child care.

With the Canada-wide Early Learning and Child Care Plan, the federal government has set a goal of reducing child care fees by half by the end of 2022, and reducing average fees to $10 per day by 2026. Nova Scotia was one of the first provinces to sign onto the plan, inking an agreement prior to the summer 2021 election. The agreement also includes funding to increase child care spaces by 1,500 in 2022 and an additional 9,500 by 2026.

For many families, $10 per day child care will be life changing. Prior to the Canada-wide Early Learning and Child Care Plan, parents in Halifax paid on average $996 per month for infant care, $890 for toddler care, and $880 for pre-school. Under a $10 per day system, families will instead pay on average $200 per month for care, saving parents hundreds of dollars per month per child. Already, since the introduction of the program, average fees in Halifax are projected to be reduced to $540 for infants, $510 for toddlers, and $508 for preschoolers in 2022. While this does not hit the federal goal of reducing fees by 50 percent by the end of 2022, it does make some substantial progress in reducing fees.

Under the Canada-wide Early Learning and Child Care Plan, for-profit providers can access funding for their existing spaces, but are not supposed to receive funding to expand. Private centres that want to expand are being directed to convert to a non-profit model.

Earlier this summer, some for-profit child care centres sent a memo to families saying that private operators were being forced to close or operate outside the federal-provincial agreement (and therefore substantially raise fees) because they cannot make profit in a system that sets limits on parent fees and sets wages for early childhood educators.

In 2017, the provincial government introduced a two-tiered wage and benefits structure for early childhood educators with the introduction of the new Pre-Primary programme for four-year-olds. Pre-Primary, a universal, free, primarily school-based program for four-year-olds staffed by early childhood educators, began rolling out in 2017 and was available to all families by September 2020.

The new federal-provincial agreement promised increased pay for ECEs, but the new wage scale has yet to be released. While the Nova Scotia Conservative government has said a new compensation framework for ECEs is coming this fall, child care centres are struggling to attract and retain staff, requiring some centres to cut back hours, or leave spaces unfilled.

The bottom line is child care should not be a business. The Canada-wide Early Learning and Child Care Plan is right to move away from using a for-profit model for the care and education of small children. We don’t expect our P-12 schools to be a business, so why should the education of children under five be any different?

We can take the profit out of care, while recognizing that private centres run by early childhood educators have played a role in providing child care. Offering private operators good jobs within a non-profit system including benefits and pensions that ensure retirement security, is a fair approach to compensate them, while at the same time, eliminating profits from child care services.

Public resources should be focussed on making child care free and accessible for all children and families. This means child care in urban and rural communities. Child care that is flexible for people who work full-time, part-time, and shift work. Child care that is inclusive and supportive to children with disabilities. Child care centres that are Indigenous-led and Afro-Centric. It also means child care where the educators and staff that work there can afford to feed their families and have good working conditions, pensions, and benefits. None of these things require our child care centres to have a profit margin.